Monday, May 5—  Since my parents live in Alabama and I live in Arizona, we all flew to Miami to meet up for our flight to Moscow.  I got in kind of late but the folks were still up for some cocktails and snacks.  In short, these are my people.  We woke up to discover that all of us were somehow allergic to our hotel room, so we tried to kill time outside of it.  Our leisurely breakfast was cut short by a man who insisted to us that Jesus does not want us to eat gluten, so we went for a rather strange and humid walk around the hotel parking lot.

It was way too early to go to the airport, but, because we all have a touch of the OCD, we decided to go anyway.  I was stunned by the efficiency and ease with which we checked in to our flight and made our way to the gate; no line at check-in , short line through security…no angry, pushing travelers.  This may have been because we flew out of the mysterious Terminal F, where red-headed stepchild Aeroflot was joined by other aviation luminaries such as Surinam airlines, Santa Barbara airlines, and airberlin.  All the departing flight announcements were in Spanish, German, Portuguese and Russian, I guess on the assumption that only foreign nationals would travel on these obscure airlines?  I started to feel defensive and protective of my dear Aeroflot, a truly great international airline and one of the world’s first, founded in 1923.

We had a long time to wait.  Mom and Dad noodled on their electronic devices, while I read an actual paper book.  The generations have traded places. 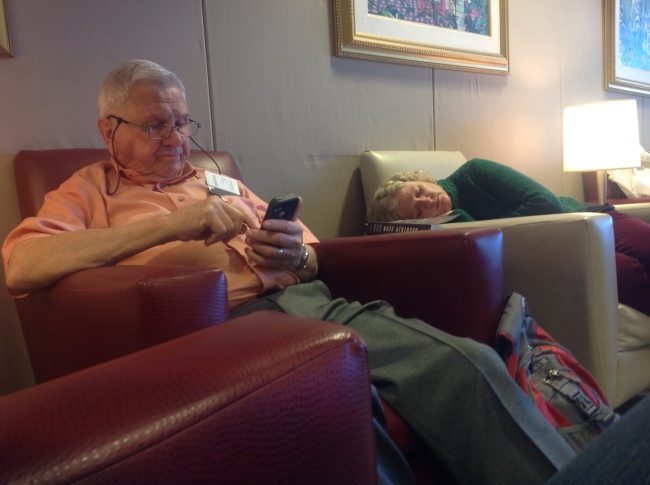 About an hour before boarding time we decided to head to the gate because, in our family, if we are not an hour early we are good and truly late.  I discovered that we are not the only crazy people in this world. A few people had already started to form a line to board.  Naturally, we got in it.  There we met some nice men from Sochi who were loaded down with designer-clothes shopping bags.  They were beaming with pride at their city’s recent fame and urged us to come visit.

This waiting went on quite some time.  The flight crew huddled around the gate.  The duty-free attendant manned a huge cart of clear plastic bags filled with cigarettes and perfume.  Security was out in force.  And yet, nothing seemed to be happening.  An announcement came on (in Russian) stating that the flight was delayed, period.  No more information.  Then, we saw a customs agent escort a chastened-looking flight attendant over to a side area.  Dad said he saw the agent carrying a huge stack of cash.  Speculation in the waiting crowd increased as customs agents pulled the flight attendants to the side in groups, apparently for searches.  One agent was speaking loudly on a cell phone so Mom, surely a spy in a former life, moved closer to eavesdrop:  apparently this was all connected to some sort of smuggling operation out of Los Angeles.  One gate agent told us the smuggling involved Apple products and that it happened all the time.

As exciting as all this was, it really became quite boring after a bit so we decamped to the bar, where we had unsatisfying cocktails and fretted that we wouldn’t actually depart that day.  I spied an Aeroflot agent in the crowd who was actually, gasp, SHARING INFORMATION and she said the flight would definitely go out today.  Finally an announcement was made (in Russian) for boarding to begin.  We were at the head of the line and the Aeroflot gate attendant asked us what we were doing, why was everyone crowding around the gate?  We told her the announcement had just told us to begin boarding.  She rolled her eyes and explained that she didn’t speak Russian so she never knew what was happening.

Regardless, we were indeed allowed on the plane and the cheerful flight attendants (who had just been through quite an ordeal themselves) apologized for the delay and plied us with champagne.  All the anxiousness of the previous four hours disappeared and we toasted our upcoming adventure. 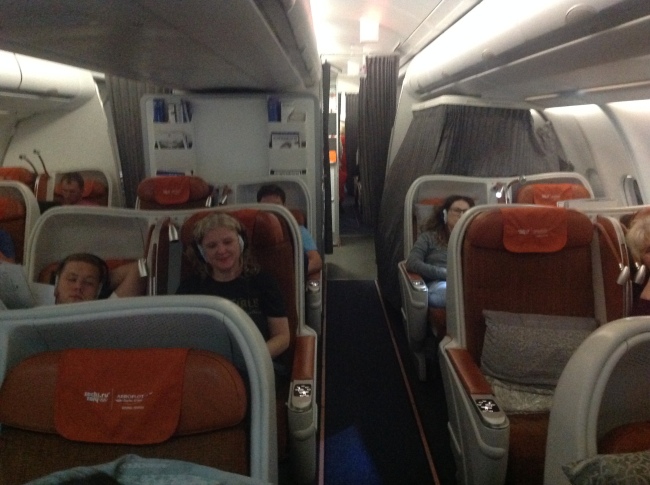