Thursday, May 8—I woke up at around 5:00am, way before anyone else.  I needed to get a SIM card for my telephone so I set off to the closest office of Beeline, a Russian cellular company.

As soon as I stepped out of the apartment building I felt a kind of relief and euphoria.  At this one moment in time I was only responsible for myself.  If I had to walk inordinately far to get to Beeline, or if I got lost, or if I failed at getting a SIM card, it was solely my problem and no one else’s.  We had only been in Russia one night and yet, apparently, the responsibility was weighing pretty heavy on me.

The closest Beeline office was just three blocks away and it was open 24 hours.  I was able to get the SIM card lickety-split so I had immediate access to my friends and mobile access to the Internet.  This, also, gave me an immense sense of relief.  It had never occurred to me how helpless, how naked I felt without my telephone.

On the way back from Beeline I stopped in at a grocery store to pick up some edibles.  Actually, if we’re completely honest, I stopped in to pick up some treats for myself that you can only get in Russia.  The first is ryazhenka, a kind of yogurty-milky-creamy drink and the second was Borjomi, the Georgian mineral water.  I think I maybe picked up some things for my parents as well (I sure hope I did), but I don’t really remember!

By the time I got back my parents were just beginning to stir.  Dad made himself some coffee in the coffee pot and Mom was hoping for some tea.  I was happy to introduce her to the electric kettle, which I think is about one of the best things on the planet and an appliance de rigueur in any Russian home.

I should mention at this point that I was extremely sleep-derived.  Before I even got to Miami I hadn’t been sleeping well (allergies at home), I didn’t sleep well in Miami, and I barely slept on the plane.  After we got back to the apartment the night before, I had some work to catch up on so I didn’t really get to bed until midnight.  And then I had gotten up at 5am….

Maybe this explains why I don’t remember much of this morning’s activity.  Here’s what I do remember:  Daniel came to our apartment and, tired from so much walking the day before, we decided to take a cab to the Tretyakov gallery.  Daniel did the standard Russian thing, which is to stick your hand out in the street, hail any passing car, negotiate a price and get in.

Daniel told the driver which route to take to the Tretyakov, which involved driving down into Kitai Gorod and along the river a little ways.  It was a *gorgeous* ride and I was kind of sorry to see it end when we got out on Bolshaya Ordynka to get to the Tretyakov.  The driver scolded Daniel for making us take such a circuitous route but I wondered if Daniel had done it on purpose just so we could have a lovely view…

We got the the Tretyakov, and I have to say, the street was amazingly beautiful that day.  There were so many tulips all along Lavrushinsky…plus, as part of the city’s celebration of the May holidays, there were little vendor booths set up all along the lane.  Here’s the Tretyakov– you can just make out the tulips at the bottom: 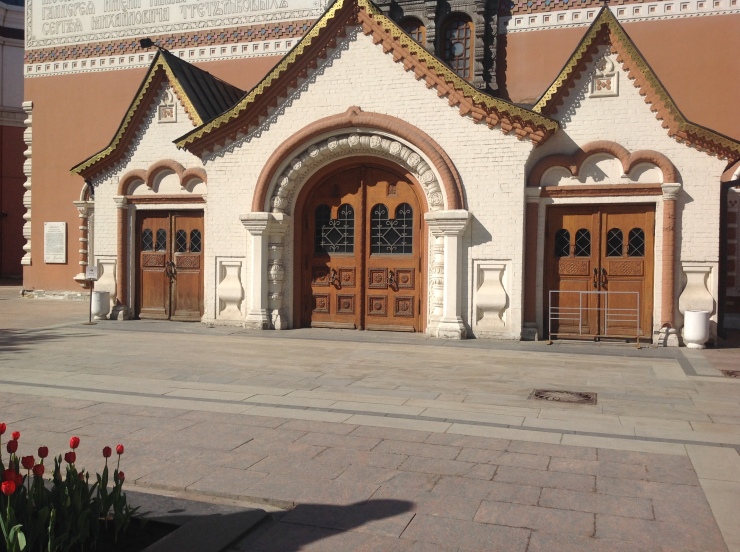 Daniel gave us an excellent tour of the Tretyakov, but damned if I don’t remember any of it.  I remember seeing all the important works:  3 Bogatyrs, Ivan the Terrible and His Son, the Unexpected Return, etc.  But mostly I was worried about whether or not my father was enjoying the museum.  He couldn’t really hear Daniel, who was a little bit of a mumbler and had a bit of an accent.  So Dad missed all the stories.  And he wasn’t wild about the gloomy subject matter of most of the paintings.

The tour ended and we went to the Tretyakov’s cafeteria for a snack that actually turned out to be lunch.  After telling my mother that Russians don’t actually eat Beef Stroganoff, that’s exactly what was served at the cafeteria.  So we had some of that, some buckwheat, and some delicious borscht.  Mom was over the moon about the borscht and raved about it for days.  Dad had some fish, I think.  I have no idea what I ate or if I ate at all!

It strikes me now that on these first few days I was excessively concerned about whether or not my parents were comfortable or whether or not they were enjoying themselves.  Luckily, that eventually wore off.

After lunch we went for a walk across the bridge to Bolotnaya Square.  We stopped along the way to admire the metal trees where lovers express their eternal love for each other by hanging padlocks on the branches:

I could tell Dad felt unleashed because he started snapping photos like mad.

I’ve never really thought much about Bolotnaya Square, even though that’s where the majority of the anti-Putin protests have taken place over the past few years.  Daniel called our attention to an interesting sculpture at the far end of the park:  “Children are Victims of Adult Vices,” by Shemyakin.  Here’s an overview of the entire composition: 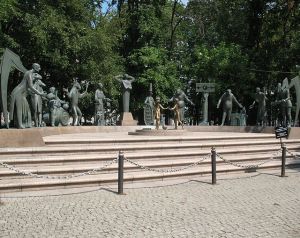 The sculpture shows children, depicted in brass and therefore golden in color, playing innocently with a ball.  Surrounding them are figures symbolizing adult behaviors such as alcoholism, drug addiction, exploitation of child labor, etc.  The central figure represents “indifference,” the worst vice of all.

After this, we strolled along the Moscow River for a bit.  It was such perfect weather.  We paused to pose in the iconic location where the Kremlin is most visible.  I remember the very first time I stood here, in 1990, and how our tour guide said this was the best spot from which to capture the variety of buildings contained in the Kremlin.  At the time I never would have dreamed that I’d bring my parents here one day.  Time seemed to collapse on itself in that moment and the intervening 24 years seemed like mere seconds.

Daniel wanted to please us, but we didn’t know what we wanted to see.  We had been walking quite a bit so I suggested we go up into Sparrow Hills to see the panorama of the city.

It’s been maybe…I don’t know…fifteen years? since I’ve been up in Sparrow Hills.  Moscow’s skyline has changed as much as New York’s has, but for happier reasons.   Now the towers of the International Business Center “Moscow-City” dominate the northwest edge of the view.

We wandered over to the Church of the Living Trinity, right at the side of the hill.  I was happy that my parents got to see an actual working church.  Inside, a priest was saying prayers while a handful of worshippers lit candles before the various icons.  A couple of the icons in the church are of relatively recent saints, i.e., religious figures who were persecuted during Soviet times.

We had a hard time catching a car on the side of the hill, but one finally stopped and took us to our final destination of the day:  the Moscow metro.  We started at Kievskaya.  My parents love the optical illusion created by people standing on the sloping escalator:

But once we got down into the heart of the station, that’s where my terror began.  I’ve been in the metro a bajillion times, but aways either on my own or with people who speak at least a little Russian.  I suddenly became acutely aware of the danger of losing my parents.  We happened to hit the stations at rush hour, so they were particularly swamped with people.  Nevertheless, Mom took some fantastic photos of the hubbub:

We got on and rode to Novoslobodskaya, another ring station.  I should explain that Moscow’s metro has radial lines and a ring line– the ring line helps you get between the radial lines in an efficient way.  Because of this, the ring line has the highest traffic, people-wise.  When a train pulls into the station, there’s a huddle of people on the platform waiting for the doors to open, then the people getting off the train hurry out and, at rush hour, you have less than thirty seconds to hop on the train before the doors slam.  Mom held on to Daniel, but Dad wasn’t too happy about my grip on him.  I feel bad about how much I yanked him around that day, but I didn’t want him to go hurtling off into the heart of a city where he not only didn’t speak the language, but he didn’t even know the address where we were staying or my phone number.  What was I thinking?  Wasn’t it just basic common sense to give that info to my parents in case we were to get separated?  <shakes head in amazement of own stupidity>

Despite the crowds, Mom and Dad both were able to get a good look around Novoslobodskaya, a station near and dear to my heart.  It had been mine in 1993 and 1996.  Kinda felt like we had a history, that station and me. 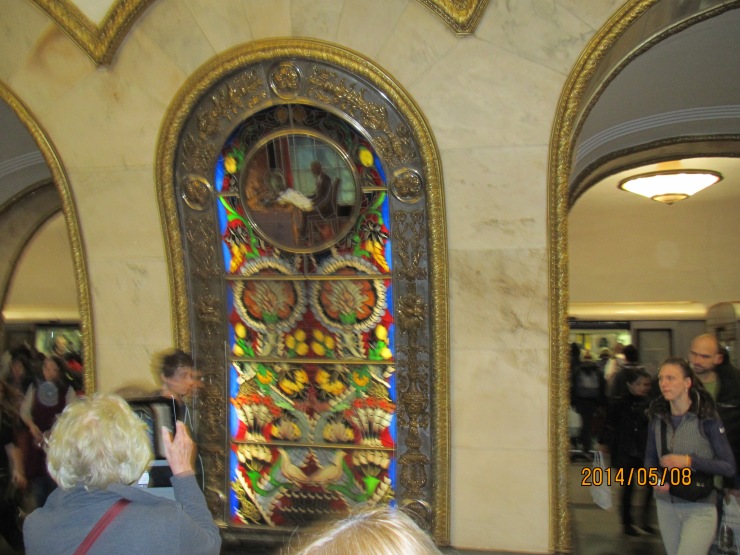 Lastly, we went to what is probably the most impressive station on the ring line:  Komsomolskaya.  Clearly it was necessary for my parents to see this station, but, damn.  Komsomolskaya is under the three-train-station complex (Leningrad Station, Kazan Station, and Yaroslav station).  That meant that not only was the station jammed with commuters, it was packed with travelers headed on long journeys with GIGANTIC BAGS. 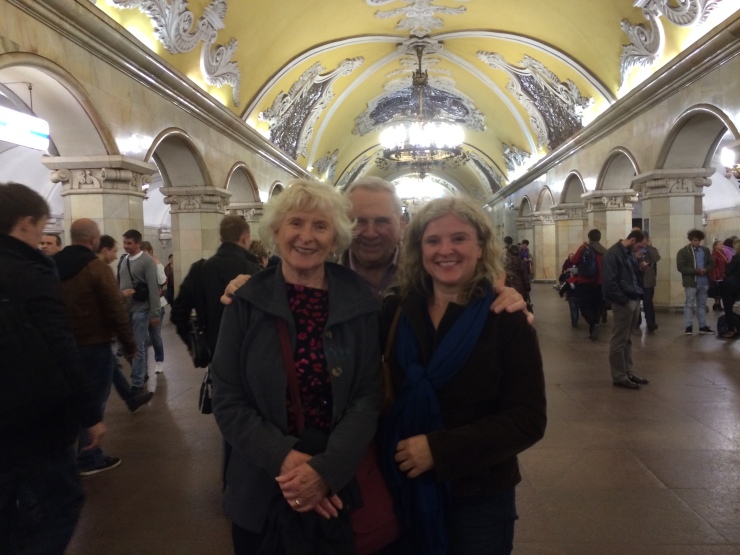 Miraculously, no one was trampled or knocked over and we stayed together long enough to make it back to our own metro station, where we said goodbye to Daniel.

That gave us a leeeeetle time to rest….(have I mentioned how sleep-deprived I was?) before we met my dear friend Anya for dinner at the gorgeous Tchaikovsky restaurant:

It was kind of loud, making conversation difficult, but I was so happy that my parents finally got to meet Anya.  She was recovering from strep throat so we were kind of on equal footing in terms of energy level. 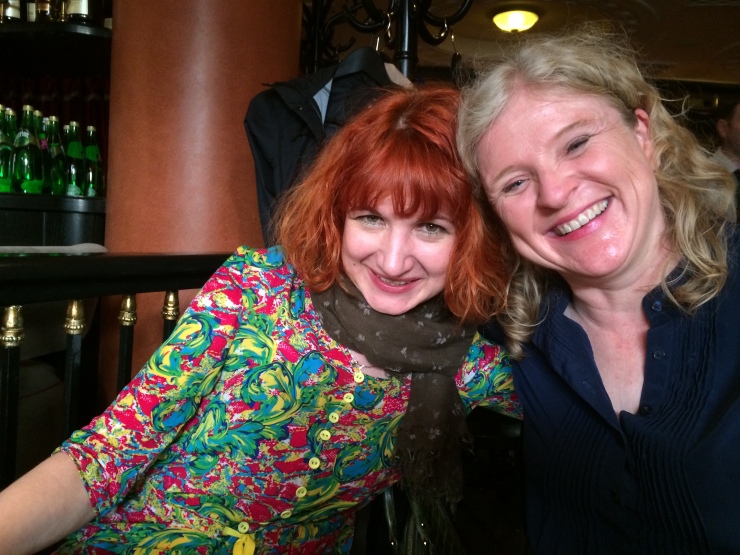 After dinner, we said goodbye and back at the apartment I fell into a glorious, deep, satisfying sleep.