Thursday, May 15– What’s up with that whole communism thing?  Well, today we got some interesting answers. First up is the Yusupov Palace.  The Yusupovs were an old noble family that had always been close to the Tsars.  Kind of like how Lady Diana’s family had always been close to the Royals.  Lots of wealth, lots of influence.  In Russia, the land of extremes, that meant extreme wealth.  At the beginning of the 20th Century, the Yusupovs were living a life of riches so extreme that it’s nearly inconceivable for non-royals to live like this. 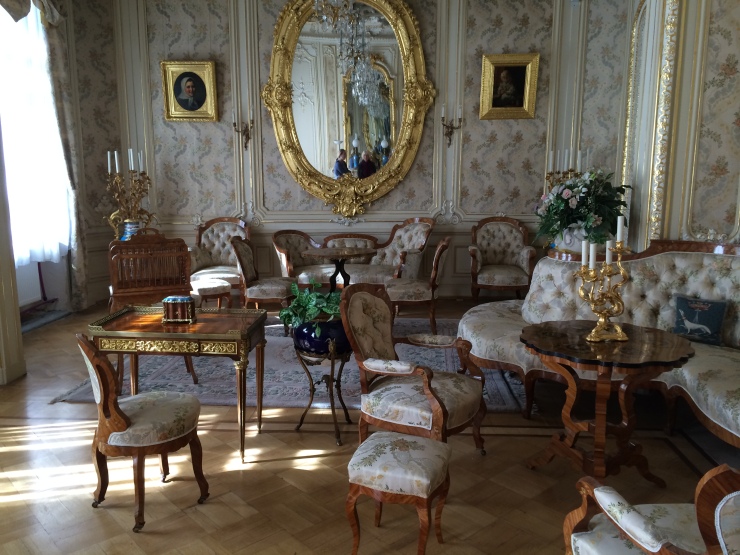 This is their sitting room…you can see Mom and Tatiana in the mirror!  And next is their Home Theater.  People have “home theaters” today, but, um, it’s a bit different now.  This was theirs:

Their dining room used to have orange trees growing inside….orange trees in the middle of the Russian winter.  We don’t have any photos, but the Yusupovs had some of the first flush toilets in Russia. At the same time, Russia was still under the complete absolute rule of the Tsar.  Most of Europe had flung off its autocratic monarchs in the 18th Century.  But Russia was still stuck with its absolute monarch in 1900.  Various people had tried for centuries to introduce democratic-ish reforms in Russia, but nothing dislodged the Tsar’s absolute power.  Meanwhile the majority of Russians– all eleven time zones of them– lived in a pre-industrial, basically medieval world.  No electricity, scant education…a life that consisted of eking out a living from the land and then giving most of the profits to someone else.  Carrying water from the well, tilling the soil with mules, shearing hay by hand….This style of life was occasionally interrupted by wars, in which folks from the countryside were sent to fight and die on behalf of the Tsar. Think back to the 1700s in France.  The time of Marie Antoinette and “Let them eat cake.”  People were in such dire straits that they deposed the Queen and King and beheaded them, then going on a rampage and beheading about 20,000 people.  This “let them eat cake” mentality was in full effect in Russia in 1900. But there was a crisis for the Tsar– his male heir was very, very ill.  The Tsar’s son was a hemophiliac and always on the edge of death.  The Tsar was being challenged on all sides and if he didn’t have an heir, that could mean a civil war. So the Tsar did everything he could to protect his hemophiliac son.  The Tsarina went even farther and took up with this complete weirdo, Rasputin, because she thought he could cure her son’s hemophilia.  Word about Rasputin started leaking out and members of the nobility were not at all happy that this freaky “faith healer” was having so much influence over the Tsar.  So….they decided to eliminate him.  They really believed they had to do this to “save Russia.” The younger Yusupov invited Rasputin over for dinner in his ‘man-cave”– his private men-only dining room.  (The Yusupov museum has put up some wax figures of the scene): 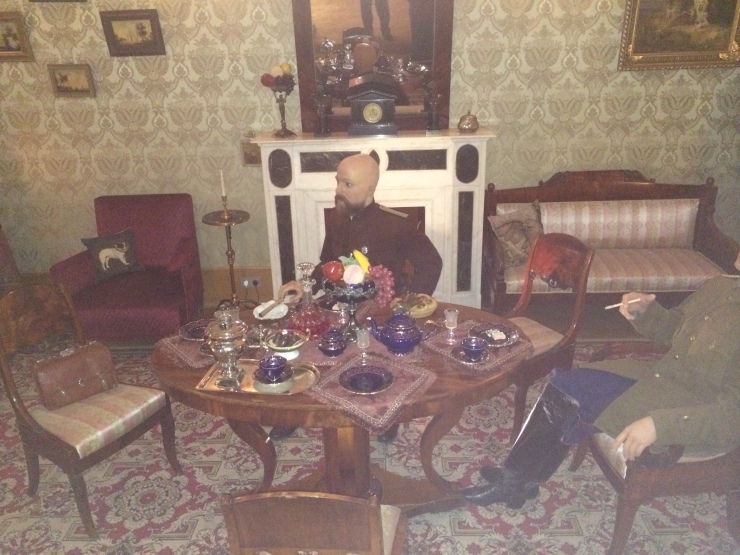 They poisoned Rasputin’s food.  Accounts are that they put a TON of poison in his food.  But, as they waited for him to die, nothing happened.  It was getting really late, so, as they were leading Rasputin out the back exit to say goodnight, they shot him.  But after being shot, he was still moving so they had to shoot him again.  Afterwards, they dumped the body in a hole in the ice of the frozen river. Well, even killing Rasputin didn’t save the monarchy.  But it makes for a fascinating story.

For more storytelling about Rasputin, the Romanovs and the global crisis occurring at that time, I thoroughly recommend this episode of the Hardcore History podcast.  Cheers to Dan Carlin for such an in-depth look.

After the Yusupov Palace we went for pies at Shtolle, a local pie-shop chain that has pretty much cornered the market on Russian pie.  Tatiana parked the car and I rustled us up some pieces of pie.  Mom got lucky and got the best one:  raspberry.

It was such a cozy place, and tea and pie is pretty much heaven.

The weather was spectacular so we stopped by one of my favorite locations in St. Petersburg, the so-called Spit of Vasilievsky island.  I don’t know what a “spit” actually is, but this is a little piece of land that juts out into the river.  It’s great because it gives you a gorgeous view of both the Hermitage and the Peter and Paul Fortress.

There were t-shirt vendors there and Dad decided to go native:

So earlier we learned the reasons behind the revolution.  Now we get to see how some of the early revolutionaries lived.  Sergei Kirov had been a long-time revolutionary and eventually went on to head the Communist Party in Leningrad in the 20s.  His apartment has been preserved the way he left it after his death (in the 30s, under mysterious circumstances…). Kirov was a big reader and worked and read constantly:

Even his dining room table was half-filled with books and work:

I was reminded again by just how much enthusiasm and idealism was behind the Russian revolution.  Did it turn out catastrophically tragic for millions of people?  Yes, yes it did.  But it was a really bold move.  Lenin and the other revolutionaries knew that revolution must come to Russia, just as it had come to France in the 1700s.  But, looking at France in the early 1900s, the revolutionaries thought they could do better.  Even though it was over a hundred years since France’s revolution, they still saw many of the problems they were trying to rid themselves of:  inequality between rich and poor, exploitation of workers by wealthy bosses, etc.  Problems our system of government has still not solved.  When we think revolution, we primarily think about freedom of speech, religion, the press, etc.  When the Russian revolutionaries thought about revolution, they thought about bread-and-butter issues.   So, gentle reader, I ask you to take a broader view of the Russian revolution.  I am not trying to excuse what the Bolsheviks did; I’m just trying to explain it.

As we toured the Kirov apartment, I got really interested in Kirov’s kitchen. 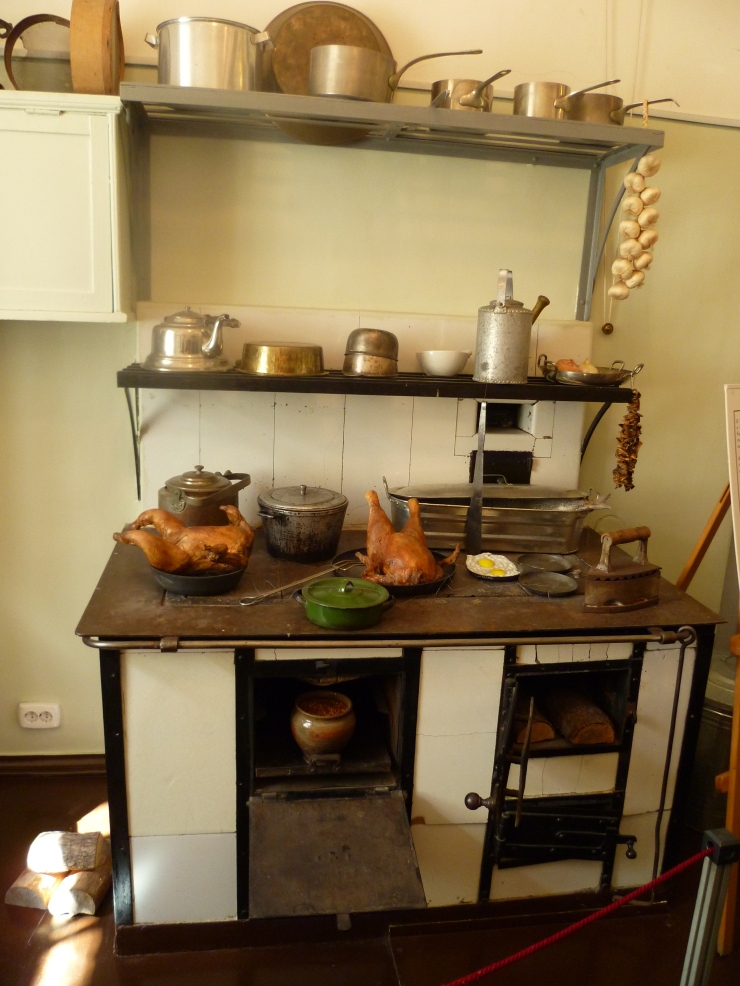 Writing this blog post reminded me that I’ve seen a lot of kitchens, many of them communist.  So here is my brief photographic essay, Rachel’s Communist Kitchens:

Part of Kirov’s apartment is dedicated to other artifacts from the early Soviet era, like public health posters.  This one says, “Our enemy is the fly!  DESTROY FLIES.”

This motivational poster proclaims, “The taller our factory smokestacks, the more nursery schools we will have!” 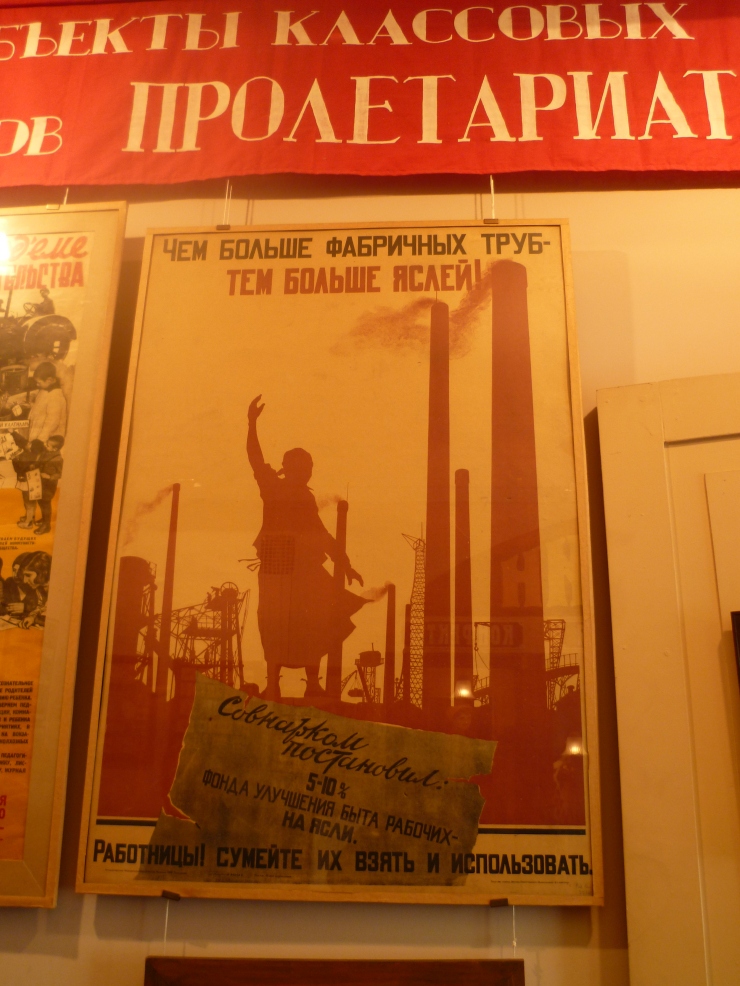 There was also this exhibit about the crazy revolutionary names suggested for new babies, depending on when they were born.  These are the names suggested for March.  They include: Dalis (which is a smushing-together of the words: Praise to Lenin and Stalin), or just plain old List (Lenin and Stalin), or my favorite, Loricks (Lenin, October Revolution, Industrialization, Collectivization, Socialism).  Wonder if I can get my pregnant friend to name her baby Loricks. 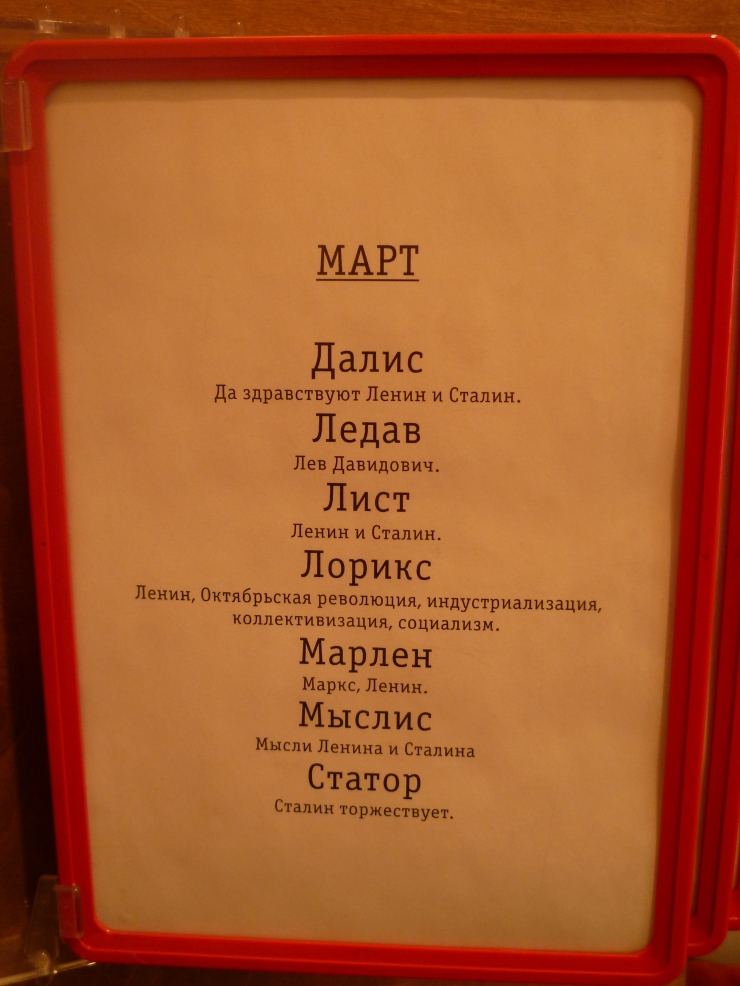 We had planned to visit the summer garden after Kirov’s apartment, but, frankly, our feet were too sore.  We settled instead on a brief peek inside the Mikhailovsky Castle, when Tsar Paul lived.  Paul was super paranoid about revolts, so he had it built like an octagon, believing that was safer somehow.  Well, he was totally wrong because he was assassinated just 40 days after moving into the castle.  This photo is taken from the inner courtyard.

We finished the day with a pleasant and bittersweet meal.  It was our last night in St. Petersburg and our last night with Tatiana.  My eyes welled up when she dropped us off at our hotel.  Can’t she fit in our suitcase?

The next morning we got up at an ungodly hour and began our long trek home.  Not much to say about airports, is there?  Well, except for this attraction in Moscow’s Sheremetyevo airport, the hotel where Edward Snowden camped out all summer in 2013:

This trip did something that I did not believe was possible:  it changed my relationship with my parents.  At 42, I figured my relationship with my parents was immutable, just a stable fixture of my life.  But this trip bonded us in a way that I still don’t think I can fully appreciate.  I expected this to just be another fun trip to Russia.  Instead, it was a journey into my own family.