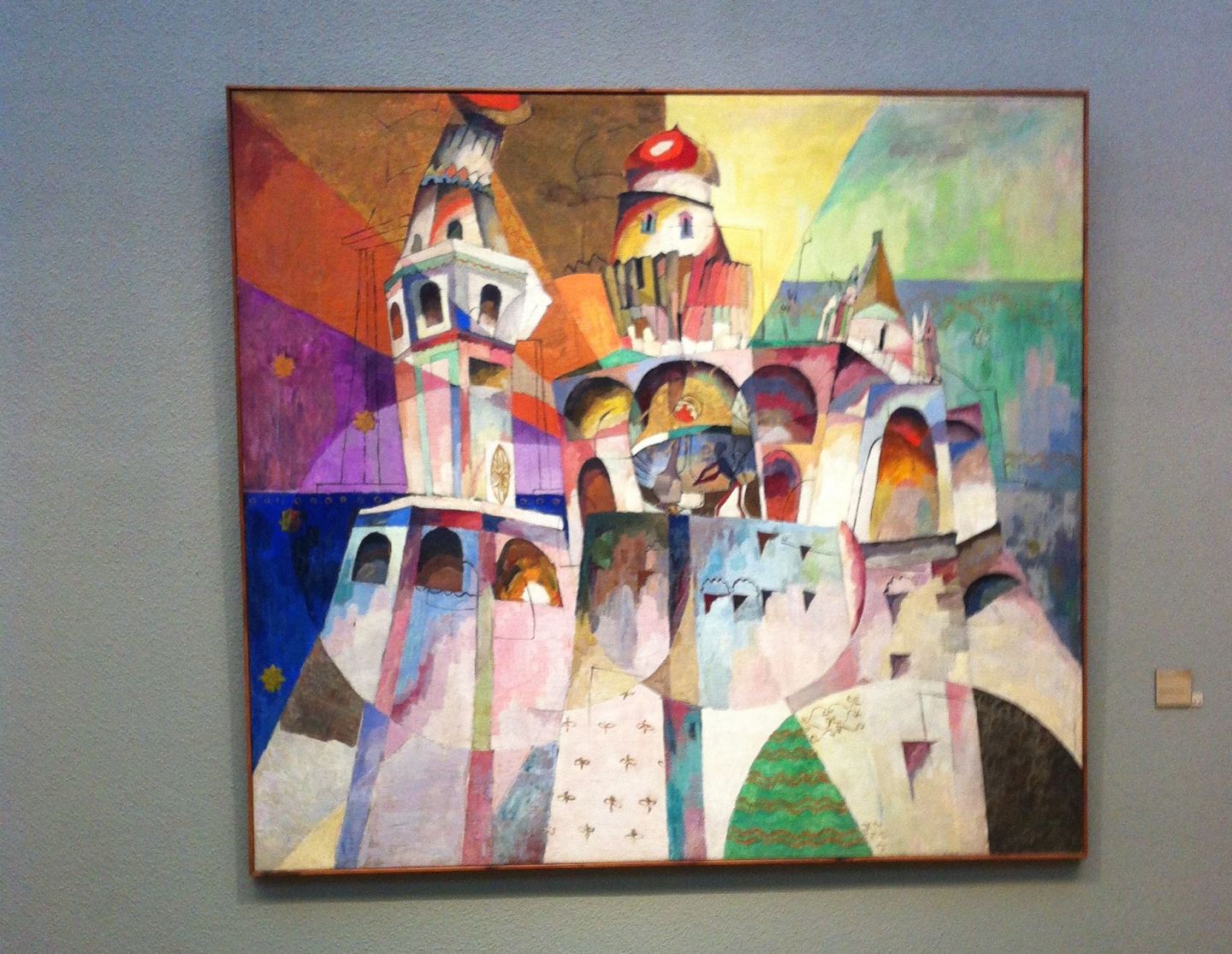 The most frustrating aspects of the Soviet Union are alive and well at the New Tretyakov Gallery.  Neglect, indifference, petty tyranny– it’s all there threatening to smother Russia’s most extraordinary collection of modern (and decided un-Soviet) art.  There’s a “triumph of the human spirit” story in here somewhere, but I’m too outraged to tell it.

The building itself warns of trouble to come: 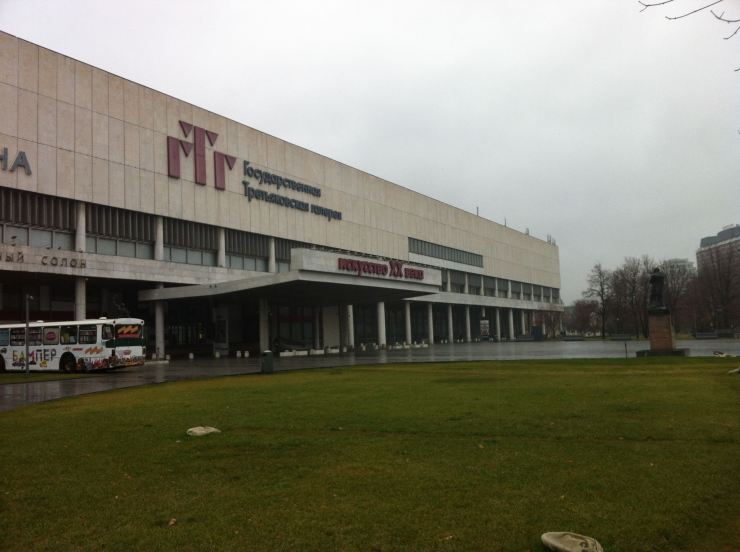 After an unoriginal lecture from the coat-check lady about the lack of a hook on my coat, I made my way to the third floor, where the museum’s permanent exhibition is housed.  Apparently the disabled are unwelcome here because there is no elevator.  (And, coat-check lady, I know the lack of hooks on coats is a personal affront to you and your profession, but nursing that grudge for thirty years is sure to lead to an early death.)

I sprang for the audio tour because, let’s be honest, some modern art is just WTF-enough to turn you off if you don’t understand the background.   I’m glad I did, for the most part.  More on that later.

The first few rooms house the Neo-primitivists.  These paintings look to Russia’s folk art for their inspiration, but used Western avant-garde techniques.  It was sort of a protest against Western art.  Here’s Goncharova’s peacock based off of the Russian embroidery style. 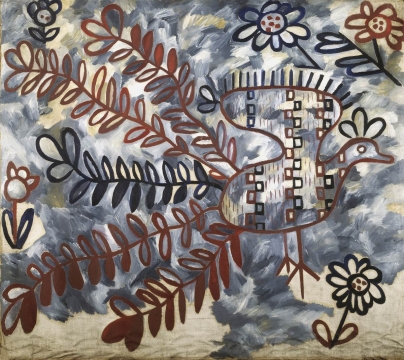 And here’s another of her peacocks…this one has an Egyptian feel to it (profile of peacock head surrounded by the feathers– the shape of the feathers call to mind the icon stand in Orthodox churches): 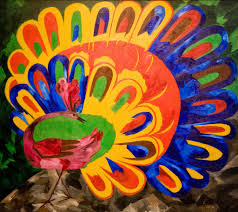 There were groups of French-speaking schoolchildren at the museum.  I thought, oh!  How interesting!  French students on a trip to Russia.  But then one of the bad-tempered museum-ladies gave one of the kids a thorough scolding for some imagined offense and the kid replied back in Russian.  So these are Russians attending a French school where they study modern art?  La-di-da!  We should all be lucky to have such a fantastic education! 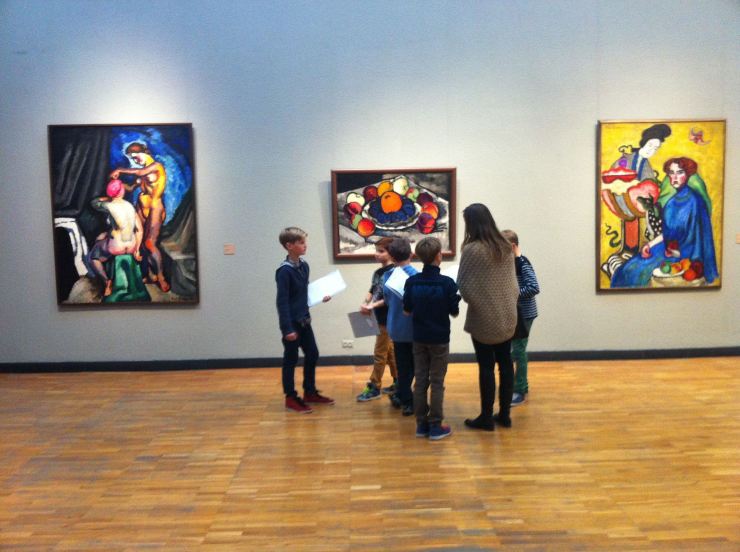 The museum-ladies are certainly part of my gripe with the New Tretyakov.  They are unusually grumpy here, except for the one I found snoring.  But there’s a much worse problem.  Look at this extraordinary painting: 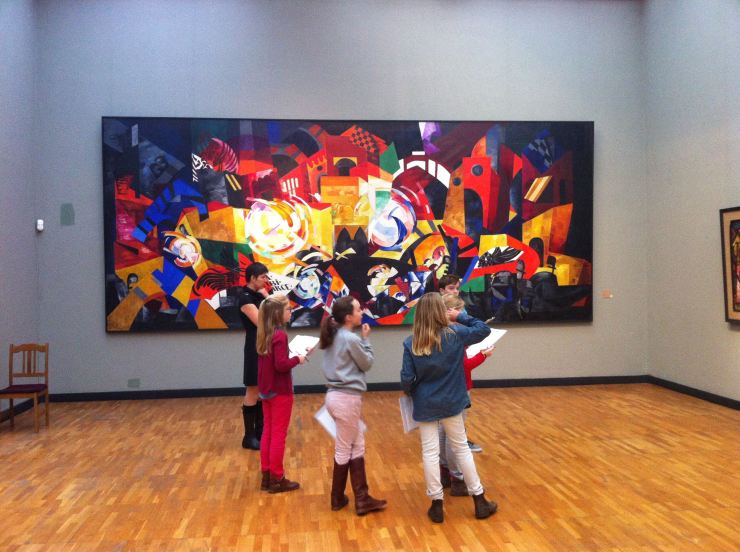 What is it?  The little sign only has an artist name and the little “audio guide” sticker has been torn off.  I asked the closest museum lady and she just shrugged, said, “I don’t know,” and went back to scowling.  After-the fact Internet research reveals that this is Aleksandra Ekster’s “Venice.”  Look how glamorous she was: 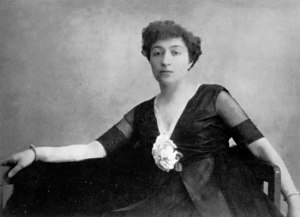 She was friends with Picasso and Gertrude Stein.  “Venice” was an example of Cubo-futurism:  The “Cubo” aspect of the painting is the taking apart of objects into their component shapes and turning those shapes so you can see them at different angles.  The idea is to see all sides of an object at once.  The “futurism” bit is the focus on movement, and you definitely get a sense of shapes in motion, particularly in the center of the piece.  I would have definitely enjoyed knowing this while I was actually *at* the museum. 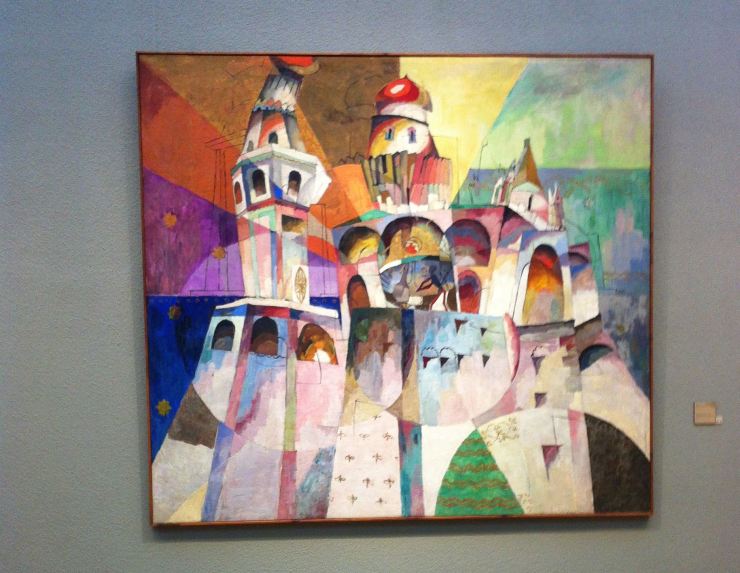 Oh!!!!!!  Here’s Lentulov.  I adore his cubist/kaleidoscope takes on architecture.  Such a treat.  But where is his “St. Basil’s Cathedral” painting?  I have a replica of it on my wall at home and it would be nice to see it.  I know it’s in the Gallery’s collection, but there’s no mention of it anywhere.  It’s not like people might want to know where a particular artist’s most famous painting is, New Tretyakov Gallery, right?

And now we come to the most perfect, the most perfectly perfectful episode of the entire visit.  I’m looking at Malevich’s infamous Black Square, listening to the audio guide. 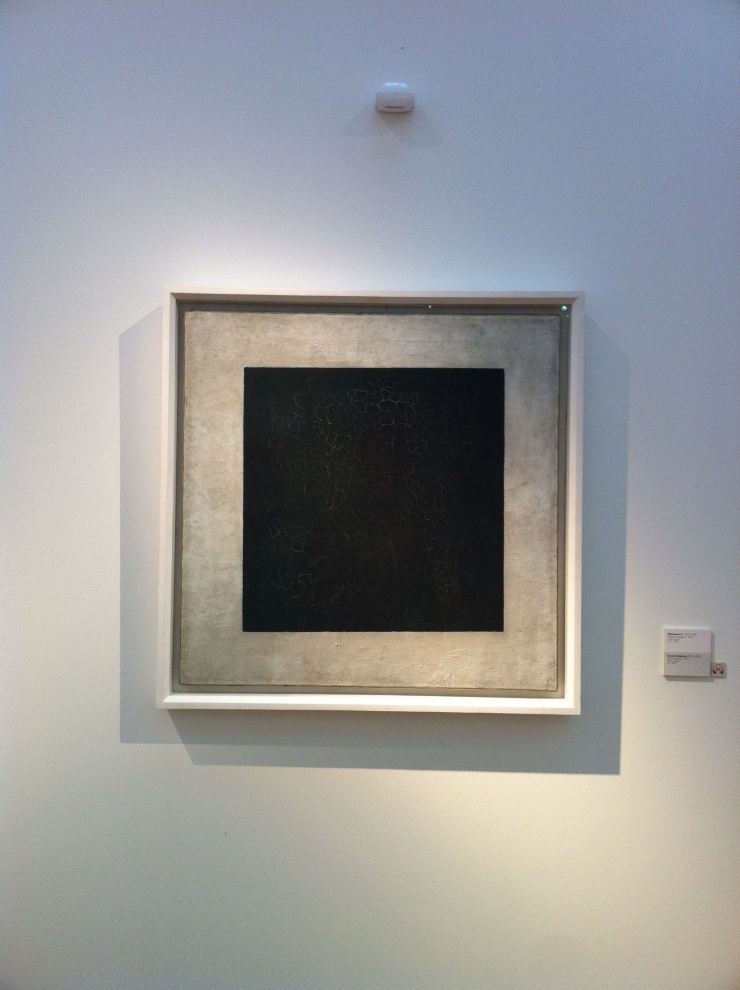 The guide describes how Malevich’s painting is a manifesto:  it’s saying, art is about creating entirely new images, not trying to reproduce nature in art.  The black is the absence of all colors and the white is the combination of all the colors.  It’s not about “do you like it,” it’s not about “how does it make you feel.”  It is a purely theoretical statement about what art should be.

As if almost on cue, one of the museum-ladies came over to me and started ranting about the painting:  “It’s just a black square!  This is nonsense.  Why is this even in the museum, it really belongs in the trash!”  Ignore for a moment the questionable practice of museum staff berating pieces in its own collection and think about this:  Malevich’s 1915 painting is *still* making people angry nearly 100 years later.  Now that’s an effective manifesto.

I continue on and spend a while listening to an explanation of this painting, Portrait of Matyushin: 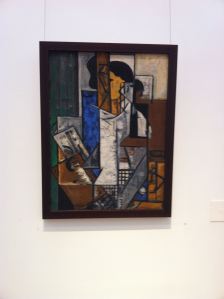 The audioguide describes a keyboard and something resembling the part of Matyushin’s hair.  I just don’t see it.  And you know why?  Because, as I learn later, that’s not this painting.  Malevich’s Portrait of Matyushin isn’t even in the museum right now.  I wonder what this painting actually was?  Thanks, NTG!

After Malevich’s idea that painting should not try to reflect nature, Tatlin said, “Well, who says painting has to involve paint at all?  And who says it has to be flat or even hang on a flat surface? 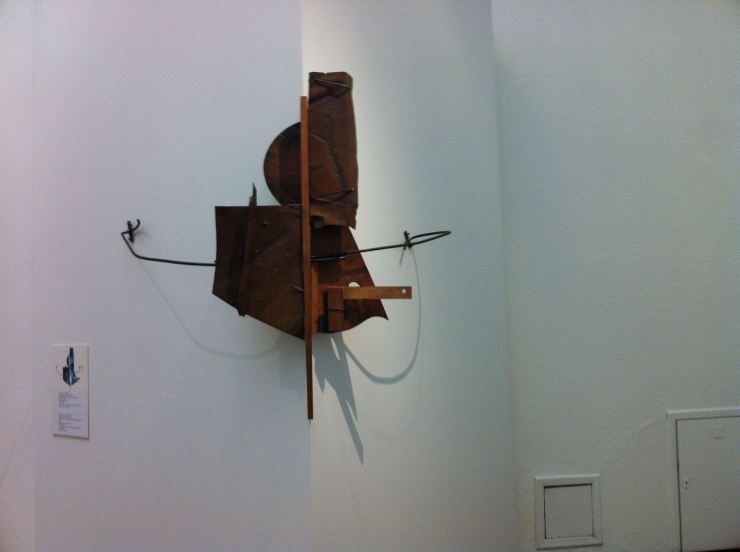 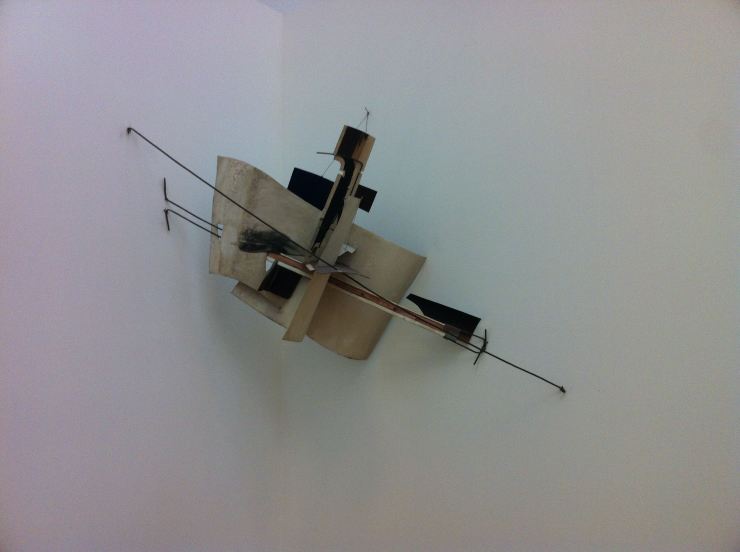 No one “got” Tatlin at the time, so these works were actually destroyed.  But the “back-of-the-house” staff at the NTG, who actually care about art, painstakingly re-created these works from the artist’s sketches.

A breathtaking Kandinsky dominates this room: 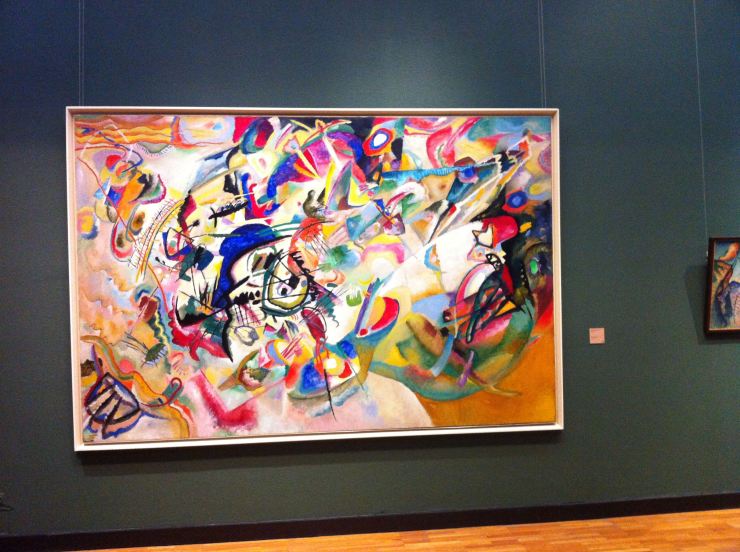 It’s Composition VII.  But where’s “Red Square” and “Improvisation #7”?  They are supposed to be here, too.  Not a sign of them.

Now we move into some Soviet-inspired art.  You’re thinking it’s going to be a bunch of BS.  Well, think again.  Look at this one: 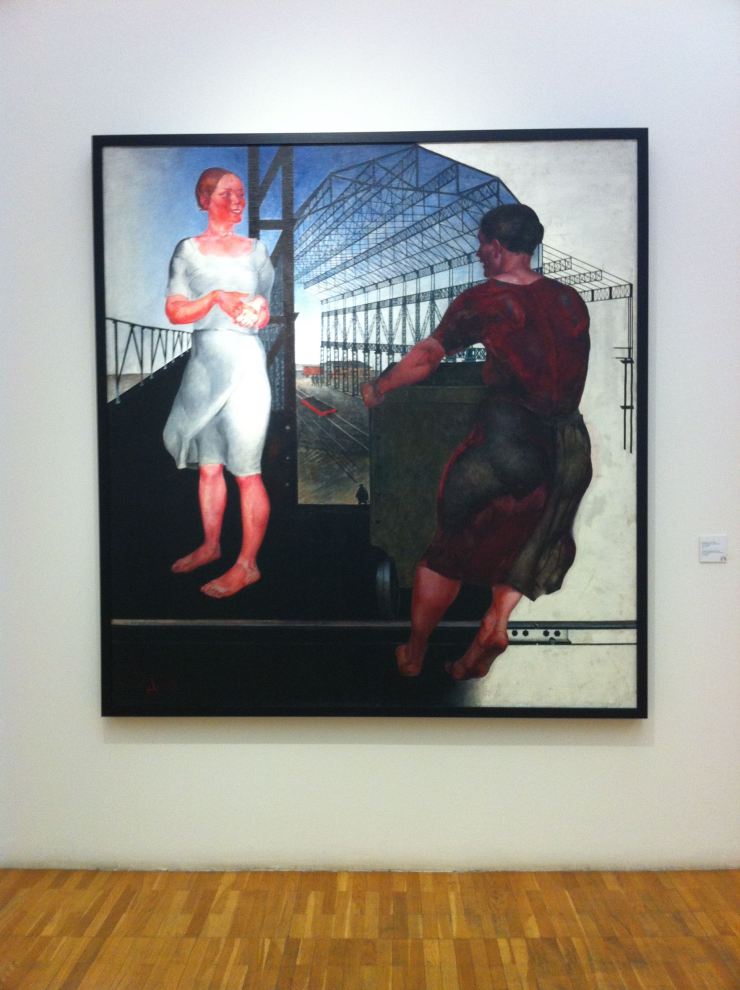 This is Deyneka’s “Construction of New Workshops.”  It clearly has an industrial theme, but look how cool the frame of the factory is, and how it extends outside the main action of the picture.  Look at the muscles on the woman pulling the cart.  Look at the interesting perspective of looking ahead and behind at the same time.  Wow.

And who can resist “Girl with a T-Square”?

Oh, hey, NTG, what is this intriguing painting below?  It’d be nice to know. 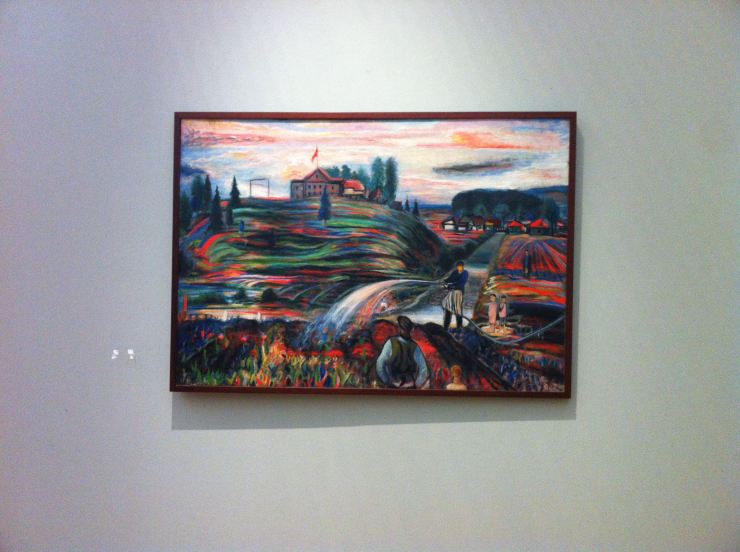 And the following sign leads me to think….did you just give up?  50 years of art all clumped together in no particular order? 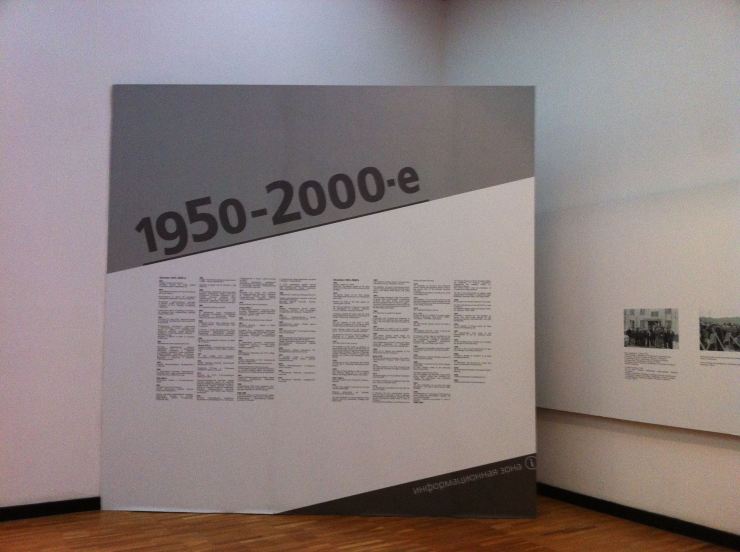 I have to say, I think this last painting is apocryphal for this Gallery.  It is Bulatov. 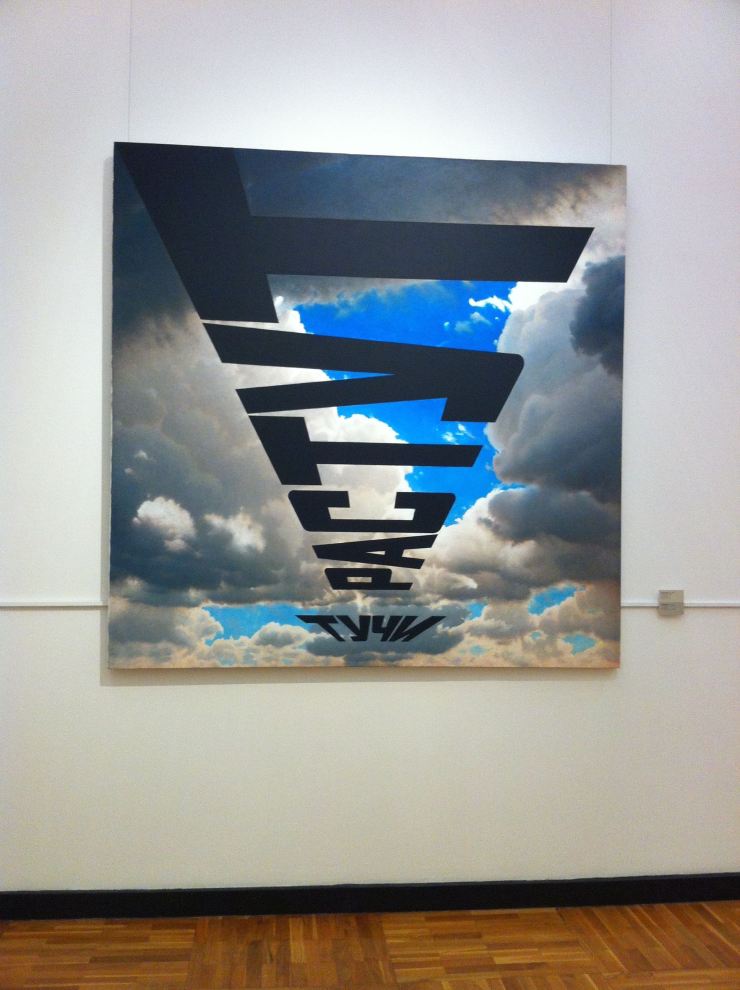 Footnote:  I have found an explanation for the missing paintings I so wanted to see.  Five days after my visit, the New Tretyakov Gallery opened its exhibit “George Costakis: Departure from the USSR.”  I suppose its just more irony…

Update 1/17: Things are changing at the New Tretyakov Gallery!