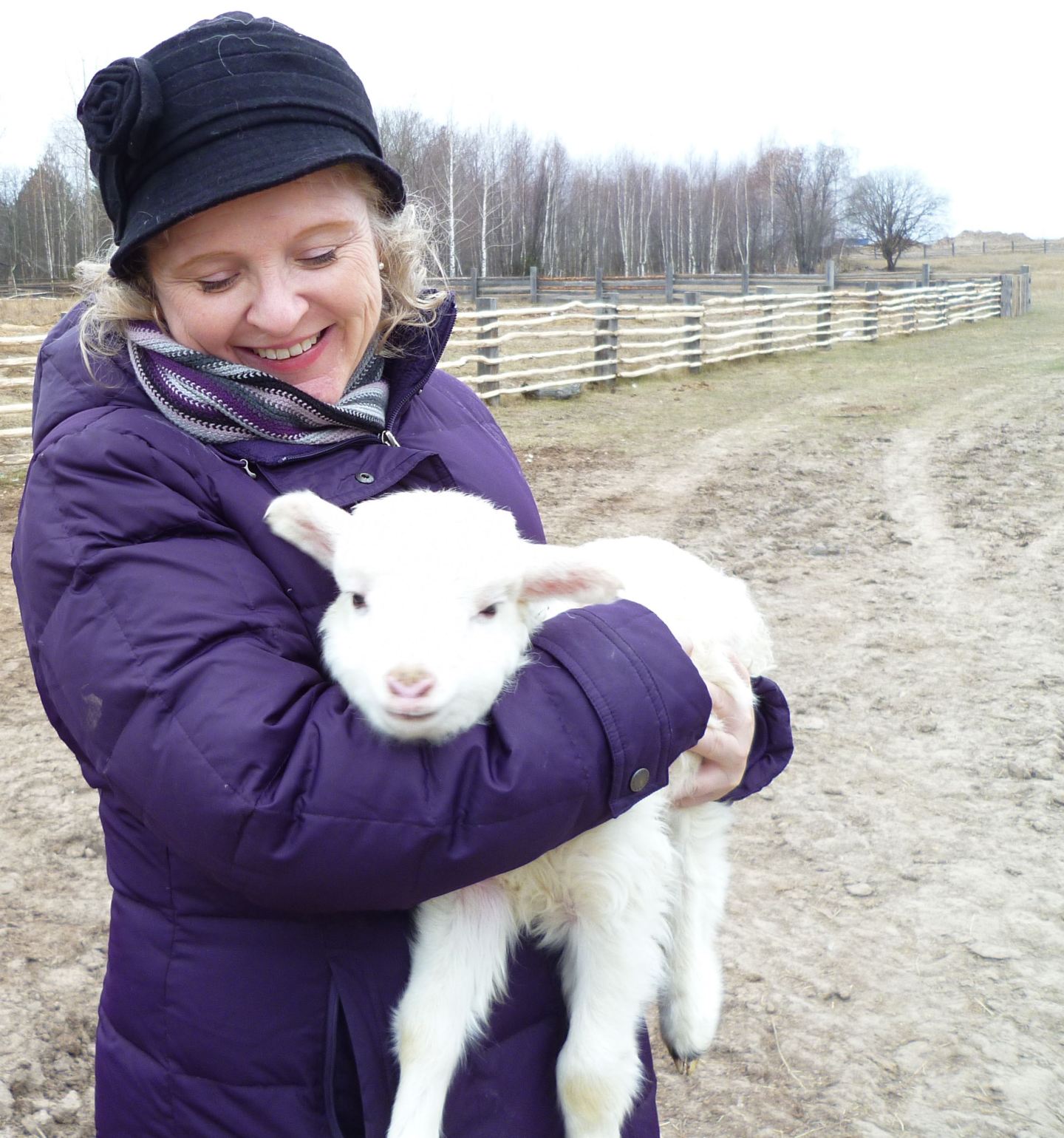 After Cheboksary we made our way to Razdolye.  Despite the fact that we had just eaten, I was treated to another meal of pastries, open-faced sandwiches, a bunch of other things and jam and tea.  I moved in and blissfully slept.

My morning began with a lush breakfast of kasha, blini, jam, more pastries and tea.  The jam was spectacular.  It’a all made from berries collected around the rest complex.  I took a walk around the premises and practiced my photo skills.  This is where I lived, in a two-story VIP cottage.  A group of oil workers were occupying the main building so, for the same price, I was moved out here, away from the rowdy men. 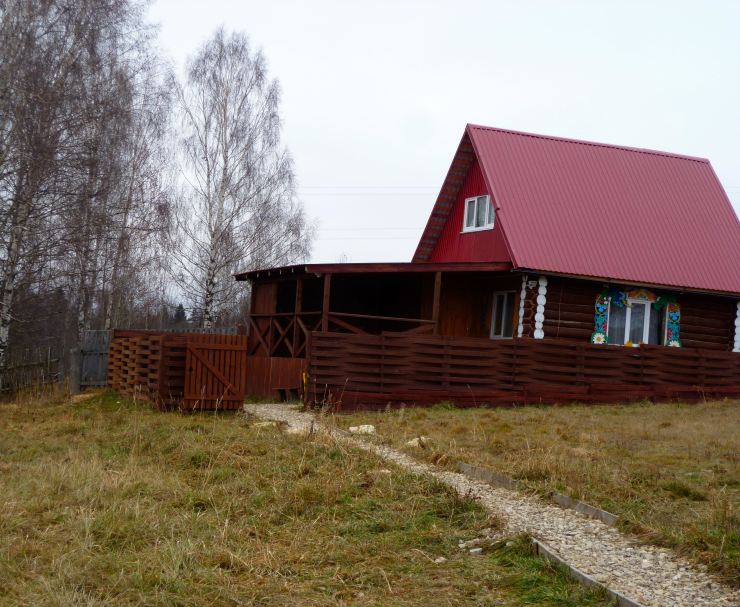 Each day a man named Dima escorted me to and from my cottage to every meal.  I’m not sure why this was, but it was kind of sweet.  I felt like royalty. 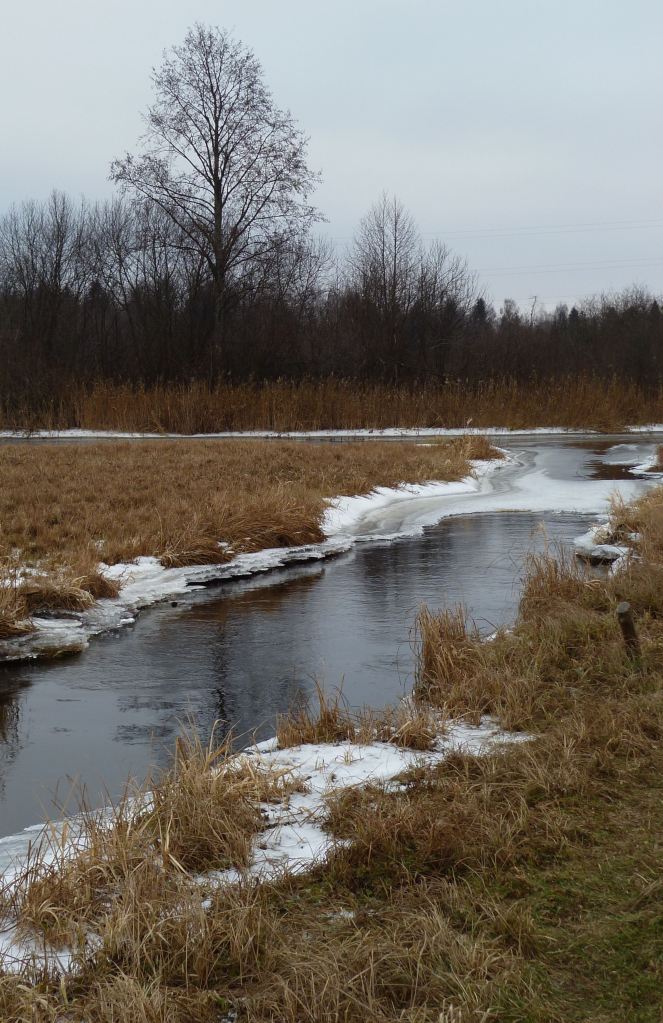 A stream ran along the edge of the complex, which in the summer is used for swimming, boating, and fishing. 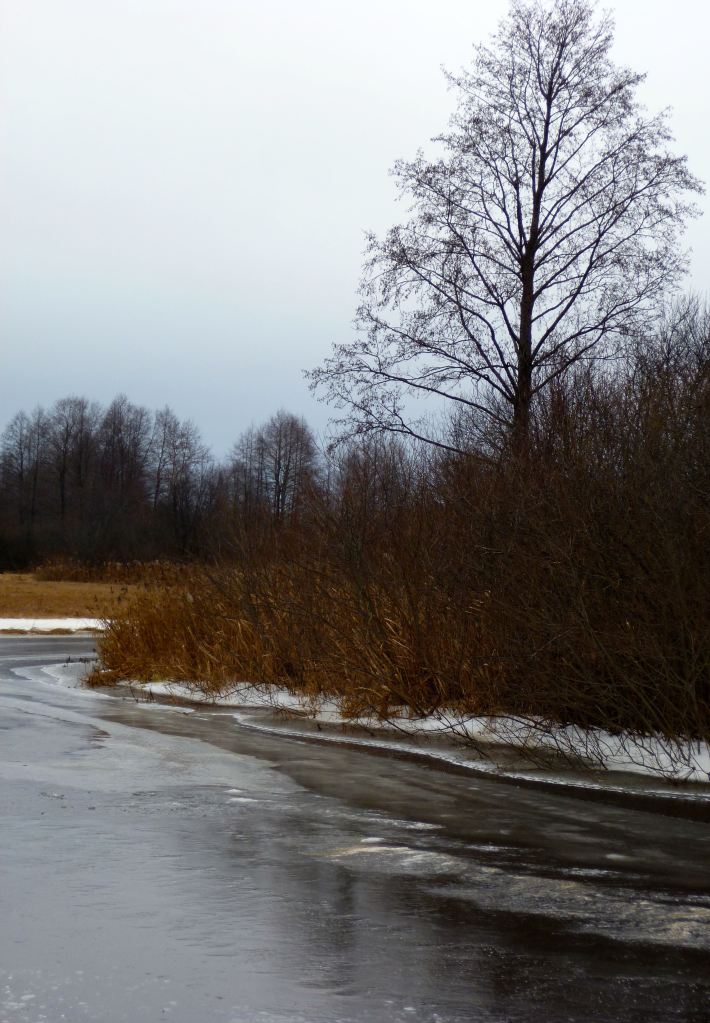 The property was surrounded by haystacks.  They do all their own haying by hand with sickles.  The ground is too uneven to use the tractor.  The hay is used to feed the cows and horses. 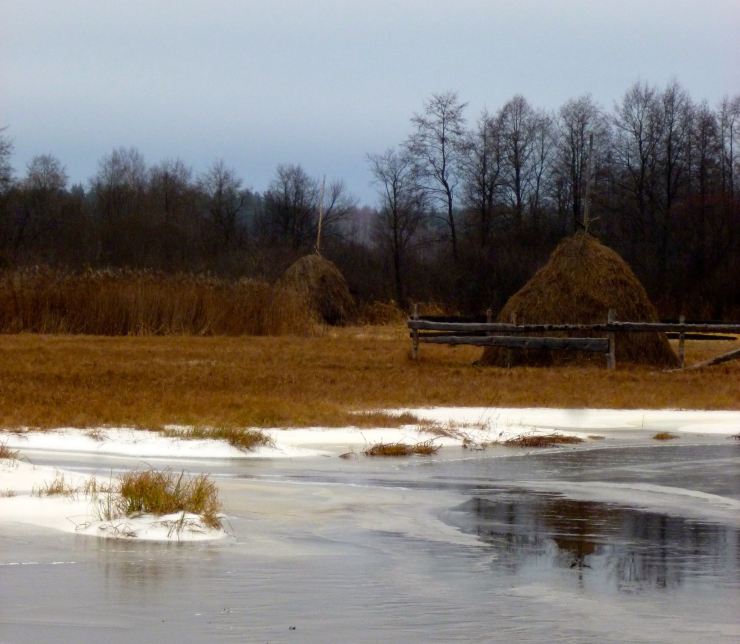 It was difficult to photograph the entire complex, but here to can see one end of it: 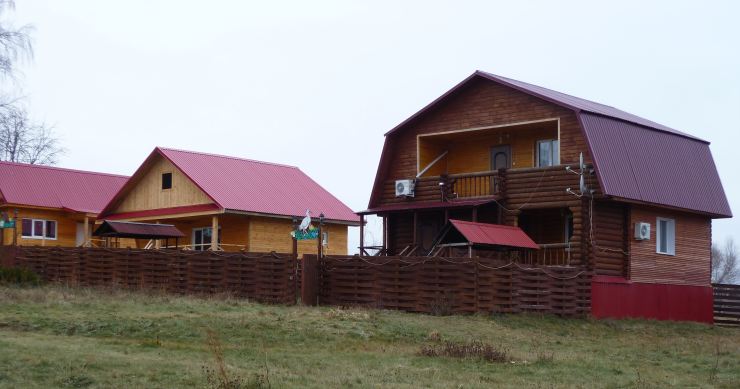 After a brief rest, Dima took me on a walk through the tiny village of Aleshkino, where the complex is located.  It has a population of between 50-70 people.  Tatiana said that after the collapse of the Soviet Union, people were left without jobs and so most of the population turned to vodka for solace.  She employs some of these people.  The rest get by somehow, probably by collecting berries and mushrooms. 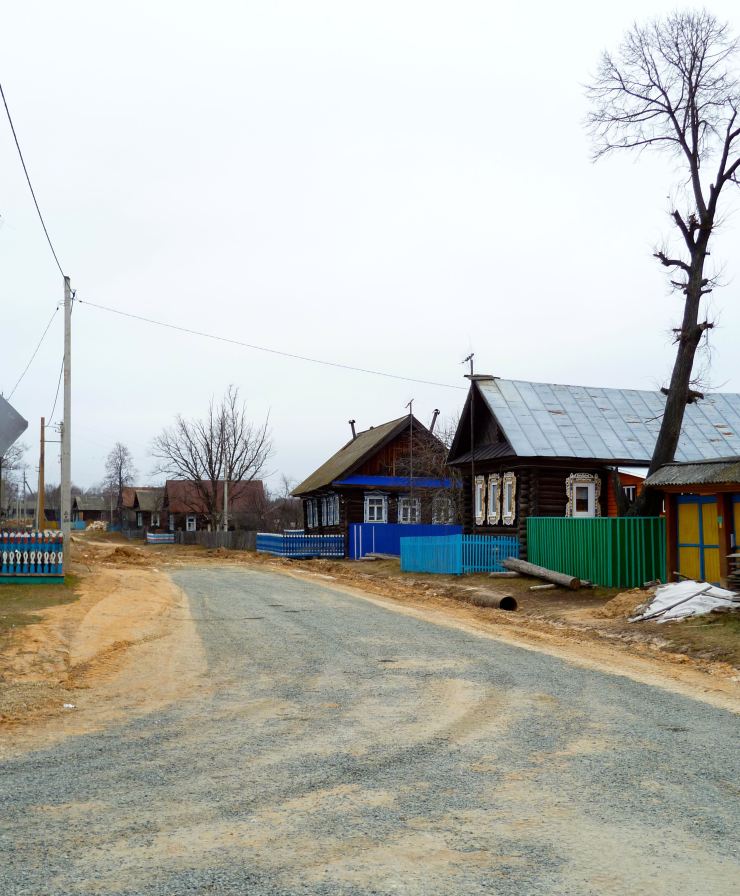 We arrived at Razdolye’s farm and I got to meet all the animals.  Like these ducks: 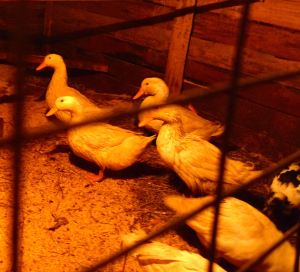 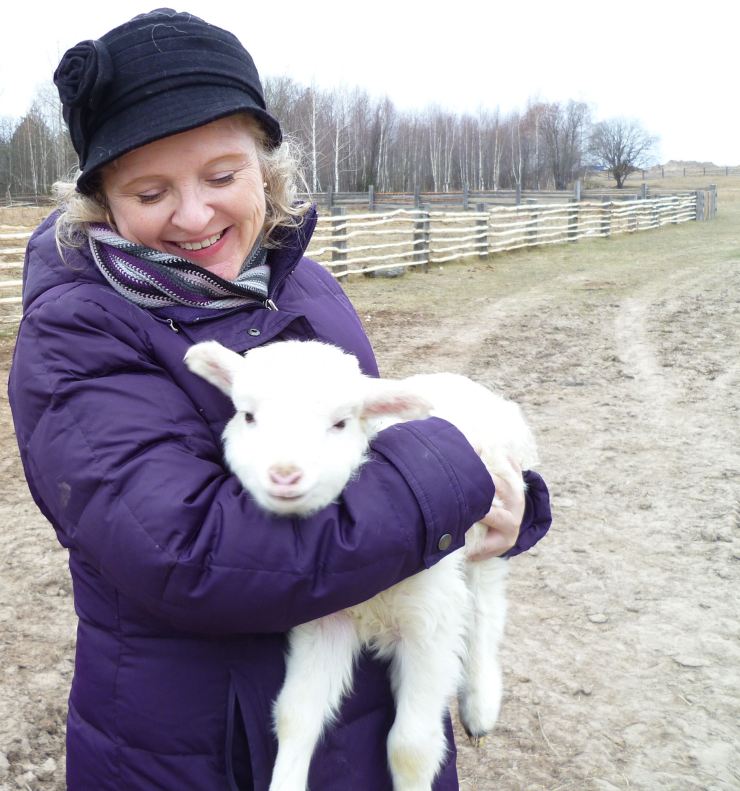 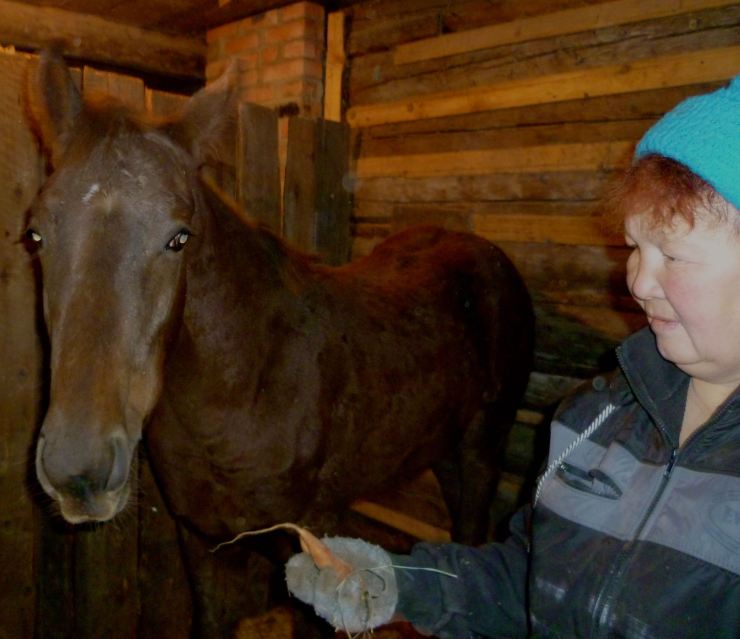 Then, I milled this goat.  It wasn’t easy at first, but I eventually got the hang of it. 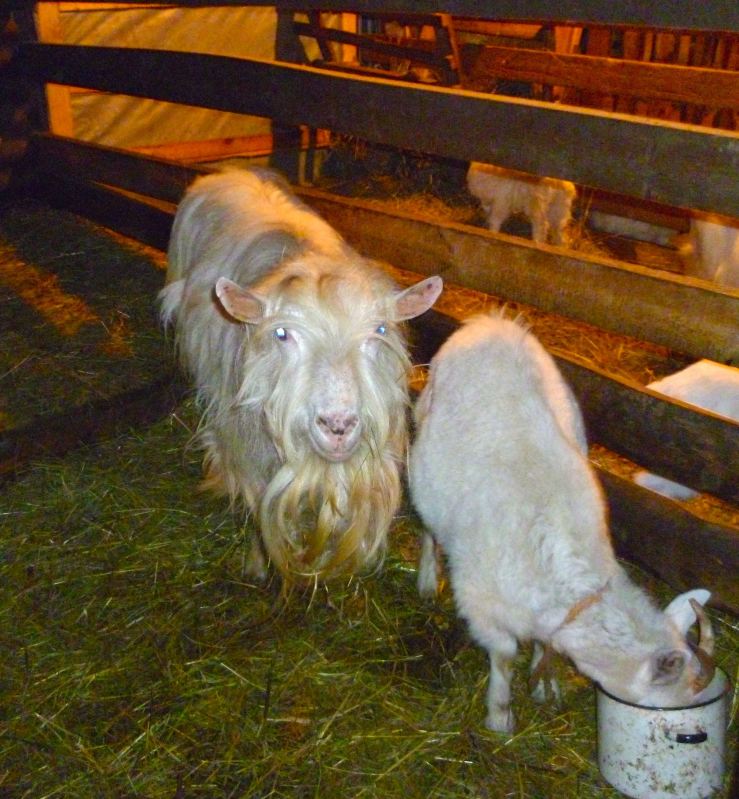 I really wanted for Dima to get a photo of me milking the goat, but I was having trouble with my camera.  It was annoying all of us and finally I realized I was missing my real experience because of fiddling with the damn camera.  So no milking photos, but I really enjoyed it.  Then I drank the milk. 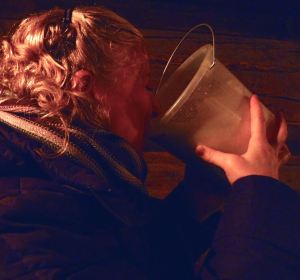 Later we went to see the rabbits.  They keep about 70 but want to get their herd up to 400.  They’re not mating right now because it is winter, but in the spring the farmer will “take them out for a walk,” which I took to mean mate them.  I could never get a straight answer about what the rabbits were actually for.  Meat? Fur? Hunting? 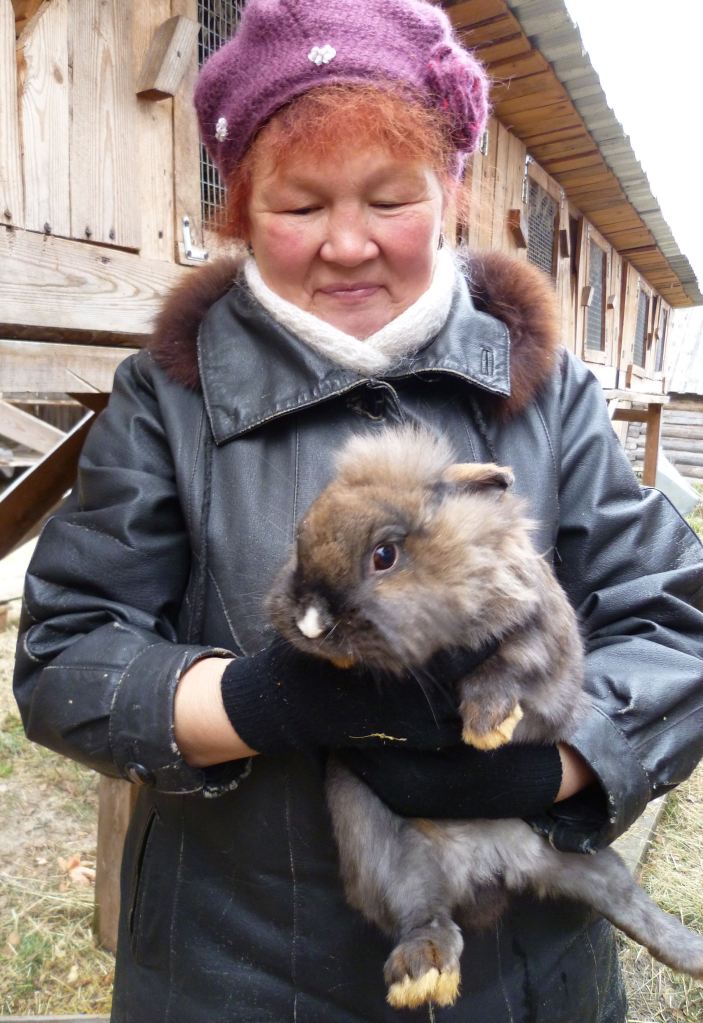 While we were feeding the rabbits the farmer lady (I never did learn her name), saw that one of them was sick and in pain.  It was mewling in a heartbreaking way.  She took it out of its cage and went into the barn.  Only later did I realize, “Oh!  She just killed the rabbit.”  The poor thing was really in pain, though, so it’s good she put it out of its misery.

The farmer lady told me about her very full day.  The rabbits, goats, horses and cows have to be fed twice a day and the cows and goats need to be milked twice a day as well.  The cages and the barn needs to be cleaned.  After the winter there’s the shearing.  Every day she collects eggs.  She estimated that she works 10-12 hour days in the winter and 14-16 hour days in the summer.

Dima was worried that my coat had gotten a little mussed at the farm so he carefully wiped it off.  Is this part of the service that everyone gets or is it some sort of “extra” that I’m not understanding?