The next few days were filled with lunch meetings for both business and pleasure. On Monday I met a friend of mine who is a documentary filmmaker. He was in the middle of editing two films at the same time so he was largely distracted during my visit. It’s a shame because he’s a fascinating person, having traveled and filmed in Afghanistan, Bangladesh, deepest Siberia…But art waits for no one so a quick lunch was all I got.

In the afternoon I met with another potential partner in this law firm idea, a woman who has years of experience working with foreigners, particularly with foreigners who get involved with Russia and Russians. I guess that’s me, after all. We talked about ways to approach the issue of a branch office and how to best communicate with the Russian marketplace. As it turns out, youtube is the vehicle of choice. Who knew? Good thing I set up this meeting.

More lunches and meetings followed, alternating with my catching up on work from home. Since there’s a ten-hour time difference I lived in kind of a half-waking haze. I’d wake up at 4am and be unable to sleep so I’d listen to some podcasts or do some work from Arizona. Once the sun came up I’d make some tea and breakfast and get ready for the day, which would inevitably make me quite sleepy…so I’d go back to bed. Then I’d wake up around 11am in time to make my lunch meetings. Generally I would be out and about until around 5pm when I would fall asleep once again, waking around 10pm. The Arizona office was open then so I kept tabs on things there until around 2am.

This strange state of affairs taught me an important lesson: next time I need to set up a strict sleep schedule, even if it’s an unusual one. A few hours here, a few hours there—I think I can live with that as long as it’s clear when those hours will be. Otherwise, I just feel like I’m never catching up.

One afternoon I found myself in GUM, the city’s main department store. They now have an old-fashioned soda counter near the fountain on the first floor. The sodas sold are all old-timey Soviet sodas, like the shockingly-bright green tarkhun, flavored with tarragon. I tried the bright red barbarisa, flavored with barberries. It was a little cough-syrupy, but pretty pleasant. Soviet sodas are fascinating to me because they are flavored with herbs we never use here, like St. John’s Wort in the soda known as zveroboi. The soda called sayani is flavored with maral root, which apparently only grows in Eastern Europe. I’ve long been fond of the Baikal soda, which is flavored with eucalyptus, bay leaves, and fir extract. Don’t get me wrong, they also had regular fruit-flavored sodas but they were still more interesting than ours: pear, black currant, forest berry, etc.

While I drank my soda I passed by a sign that made me stop and turn around: “Historic Toilet.” As you can see, it was quite inviting: 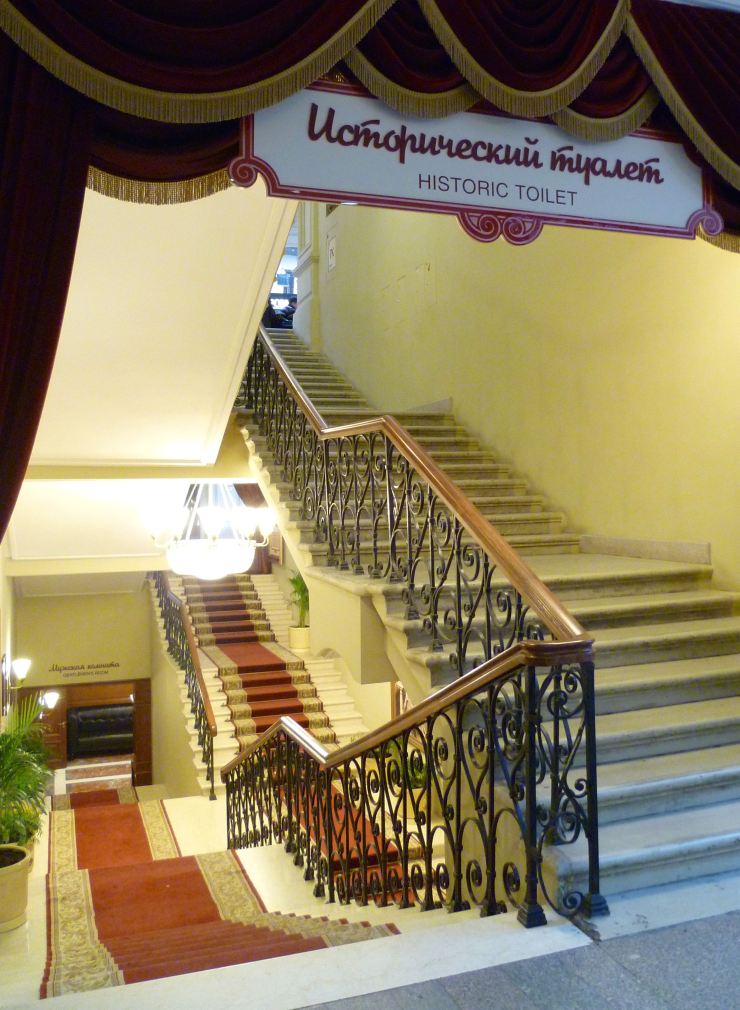 I read the sign and it was about three dollars to enter. That seemed like a mighty steep price for a toilet. I decided to read about it while I decided whether or not to spring for it.  In the 19th Century, the area that GUM now occupies was taken up with “trading rows,” in other words, rows of traders selling their goods. Right before the turn of the century the rows were brought under one roof and the area was turned into what we would today call a “mall,” that is, a shopping area with places to eat and rest. The architect imagined that people might come to this place to spend the entire day, so facilities were installed, complete with English water closets (toilets) and marble bathing areas. These grand toilets were used until the revolution, when it was decided that the toilets were too bourgeois. For years it was unclear what use would be made of GUM but in 1953 it was reopened as a department store. But these toilets were still too fancy so the marble was cemented over and the English toilets were replaced with Russian ones. Apparently, restoration on these toilets began in 2004 and took seven years. You can even take a shower here now.  This toilet even has its own website.

I couldn’t resist.  This attraction has two of my favorite things:  history and toilets.  I went downstairs and paid my $3.  It was….a fancy bathroom.  It was also completely empty of customers but there were three ladies working there as if preparing for a crowd.  I couldn’t help but ask them:  do people really shower here?  “Oh yes!” they swore.  “People shower here every day!”  So I took a look around, did my business, and went on my way. 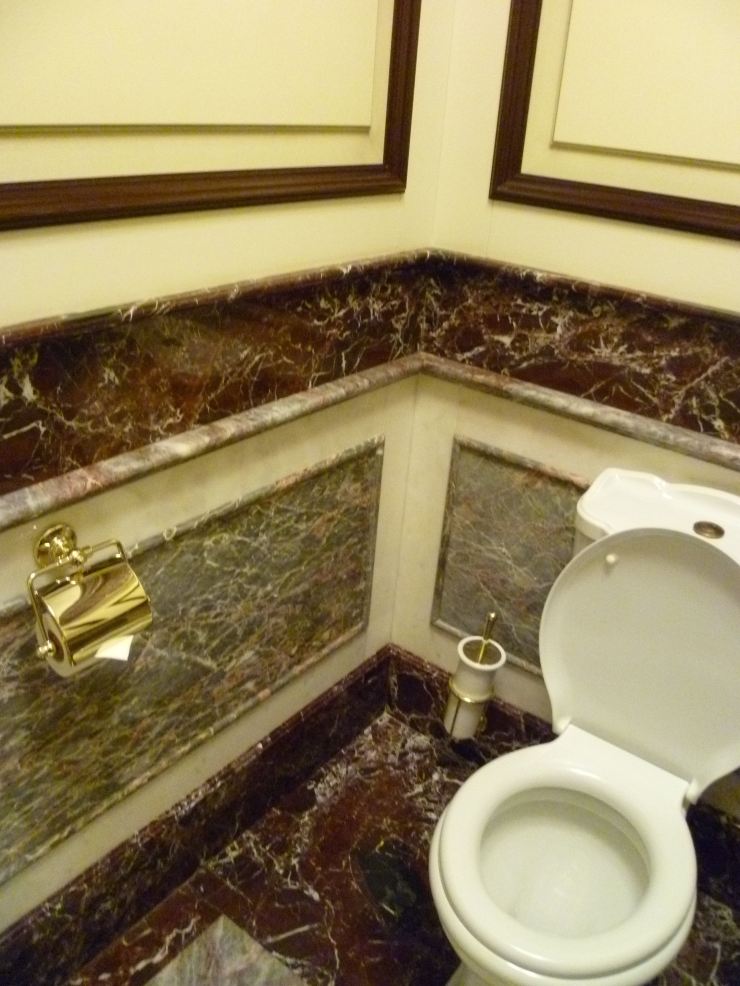