As I mentioned, a Russian friend recently told me that I had lost all perspective. I can think of no better example of this than my choosing to watch the ten-hour 1984 mini-series “TASS is Authorized to Declare…” on my flight home from Moscow.   No one in their right mind would watch this.   But I was mesmerized. Or maybe hypnotized?

It’s nominally a spy thriller.   But any time the action builds up to what might be called a thrill, the film cuts to an unbearably long and slow (two-minutes!) car ride through an empty city. The prog rock/syntho soundtrack keeps making you think something shocking will happen during this car ride…the tension….the rising tension! But then the car stops, a man gets out, and he walks into a building. That’s it.

If you feel like living this fever dream yourself, you can watch the clip here:

(although, to be honest, it actually is kind of interesting because you can see how much downtown Moscow has changed in thirty years)

(also, you should really just let the clip run while you read this so you can hear the muuuuuuusic)

The plot centers around an American mole, in other words, a Soviet official working for the Americans. The Soviets are anxious to find the mole because the U.S. is about to pull off a coup in the fictional African country of Nagonia. Planning for the coup is taking place in the neighboring country of Traziland, so a fair amount of the action takes place there. Traziland is a very unusual place in that it is mostly, though not entirely, populated with dark-skinned people who speak unaccented Russian, drive American cars, and whose street signs are in Spanish. (It’s obviously Cuba.) Some of the make-up on the dark-skinned actors is so bad that I thought they were actually in blackface, but google claims it’s just bad make-up.

The bad guy in this movie is an American working for the CIA named John Glebb, incongruously played by the Georgian actor Vakhtang Kikabidze and over-dubbed by a native Russian actor.

He winds up being the horriblest of horrible people: a) he’s got ties to Nazis and admires their work; b) he used dead babies to smuggle drugs in Nepal; and c) he wants to topple the government of Nagonia for purely profit-related reasons.   Interestingly, having this bad guy around nearly completely absolves the American government of all wrong-doing in this movie. The coup is basically the brainchild of this one bad guy and his American bosses are just sort of stupidly going along with it in their shabby office:

Once the mole is discovered, the Soviets tell the Americans to call the coup off and “TASS is authorized to announce…” that KGB counter-intelligence has discovered a spy on Soviet soil.

This film came out in 1984, the year before Gorbachev came to power. It aired in the summer, reportedly to distract everyone from the Olympics in Los Angeles, which the Soviets were boycotting (in response to our boycott of the 1980 Olympics in Moscow).  Based on a true story, apparently everyone was glued to the T.V. while it was on and the streets were completely empty.   The real-life mole was supposedly Alexander Ogorodnik, who was blackmailed into working for the CIA with the help of some spicy video footage. He was caught and then either committed suicide or was killed (depending on whose version you believe). KGB agents went to his next scheduled spy meet-up and caught the American spy Martha Peterson.

In addition to the patriotic message of foiling a spy, there are a few other life lessons in this movie.

Life Lesson #1: MARIJUANA WILL DRIVE YOU INSANE, ESPECIALLY IF YOU ARE A NAZI

John Glebb’s wife, a wealthy Nazi heiress, went insane due to her marijuana addiction.  He has her stashed away in a mental institution, where she is visited by Soviet investigators.  During her interview she tries to seduce the investigator with her sleeve…no! her hand…in hopes of getting a single joint.

Life Lesson #2:  SURREPTITIOUSLY SELLING VODKA OUT OF THE MINERAL WATER STORE MAY ACCIDENTALLY ALERT THE KGB

You’re just a guy selling glasses of juice for a living.  Why wouldn’t you try to make a little extra on the side by selling glasses of vodka, too?  But when one of your vodka customers is under investigation for being a mole….you start to regret doing business with alcoholics.

Life Lesson #3:  IF A BOYFRIEND CONVINCES YOU TO PLAY TENNIS OR TAKE UP YOGA, HE IS SPYING FOR THE ENEMY

This seemingly upstanding man convinced two different women named Olga to take up somewhat extreme fitness regimes, including fasting.  And then he sold out the motherland. 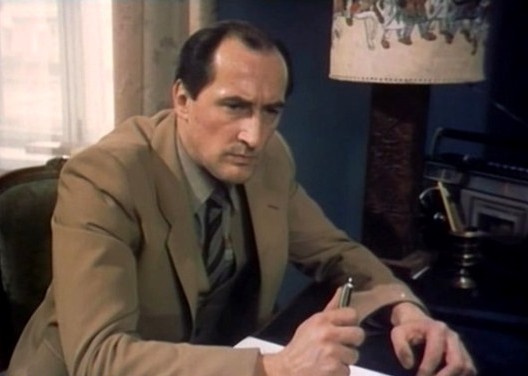 You have been warned.  Now carry on.