Our lodgings were in the dormitory of the Special Astrophysical Observatory of the Russian Academy of Sciences. We were two to a room, which was pretty comfortable. My roommate was Bhavna, a researcher from London and I worried about her—I’m a terrible snorer. I offered her some earplugs but she said she’d be fine. In the end she was probably NOT fine.

In the morning I took a gloriously long and hot shower and, evidently, deprived my next-door neighbors of all the hot water.   Breakfast was huge and hearty. Afterwards, we made our way to the conference room to finish up our academic business. Again the room was a comfortable size, but smaller than the grand conference hall. We got into some great and lively discussions.   I made some comments, too, and it was at this point that I realized the absolutely heroic efforts of the English interpreter. Until this moment, he had been doing simultaneous interpretation through headphones. But, because the astronomical center was not equipped with these, he was now doing his interpreting in front of everyone. I CANNOT BELIEVE this man’s memory. Someone would get up and speak for a few minutes in Russian. This man would somehow manage to remember all of it and translated it flawlessly into English. The same is true of his translation from English into Russian. I’ve been to a lot of interpreted events, whether they be lectures, court hearings, etc., and I have never, EVER been as impressed as I was with this guy. I gave him a hearty congratulations afterwards. I realized that not many people can recognize his accomplishment—you have to know both Russian and English to get a feel for how amazing his work was and the people who depend on his services are people who don’t speak English and Russian. How frustrating it must be to have those you help not know how skilled you are!

We broke for lunch and then headed out on our first excursion, a tour of some churches in an archeological preserve. These were very old churches of remarkable archeological significance. But…..I lost the tourguide early on and just enjoyed the mountain air and the sunshine. As soon as we walked into the preserve we were greeted by a vulture, chained to the ground for (I guess?) tourist purposes. We all took photos in front of it, but occasionally it would fly up and squawk, which scared the shit out of me.

Not literally, but those around me maybe thought otherwise because I began to smell of shit. Apparently, I’d been uncareful in my steps up to the vulture area. I wiped it off in the grass as best I could. But I still worried all afternoon. 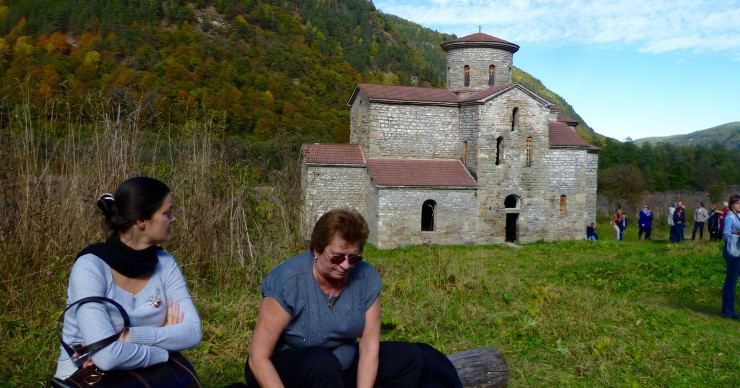 At one point we came upon these jam stands. You could taste each kind of jam and they had a spigot of free hot tea there for you to cleanse your palate. I basically wanted to buy them all, but I knew I’d never get them all home in my suitcase. Anyhow, I wound up with a jar of oblepikha or sea buckthorn, barbarisa or barberry, and kizil, or dogwood. The oblepikha was orange-colored with seeds in it, the barberry was bright red and the dogwood was deep, deep purple. I clanked with my jars into our little van. 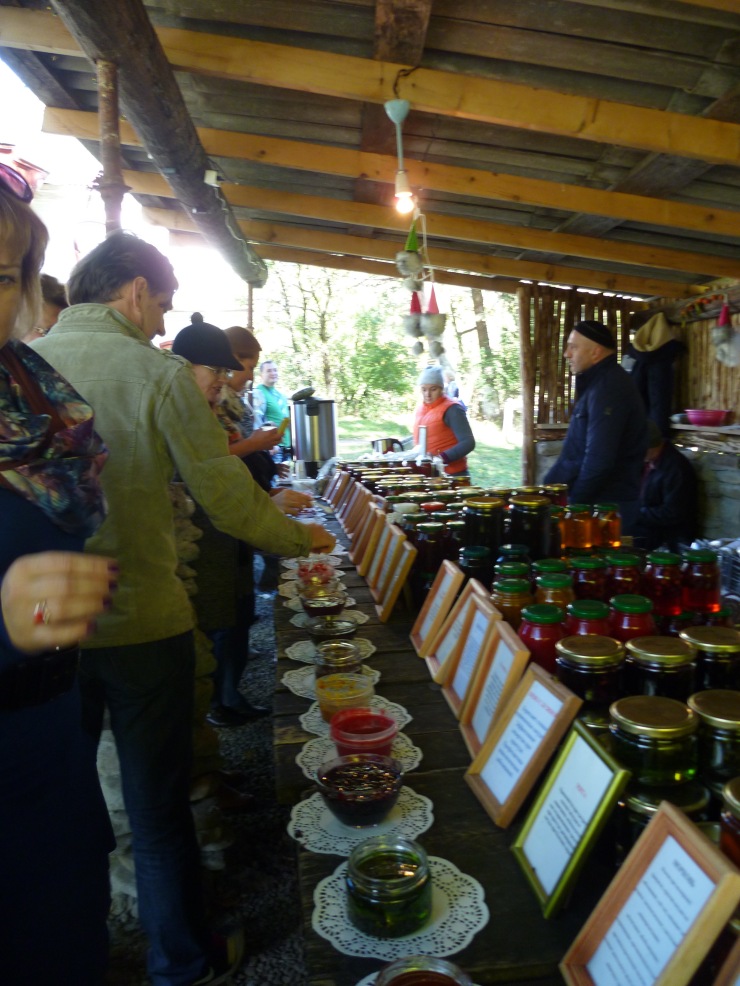 Our next stop that day was the Special Astrophysical Observatory. It’s Russia’s largest land observatory. There are two telescopes here, an optical one and a radio telescope. The optical telescope is called the Large Alt-Azimuth Telescope. It is here where I must confess that I know a little bit about telescopes because, in a past life, I used to date an astronomer. Telescopes all have ridiculously banal names: The Large Binocular Telescope (in Arizona), the Very Large Telescope (in Chile), the European Extremely Large Telescope (also in Chile, oddly enough). There’s also the Discovery ChannelTM telescope, but that name is boring for an entirely different reason. 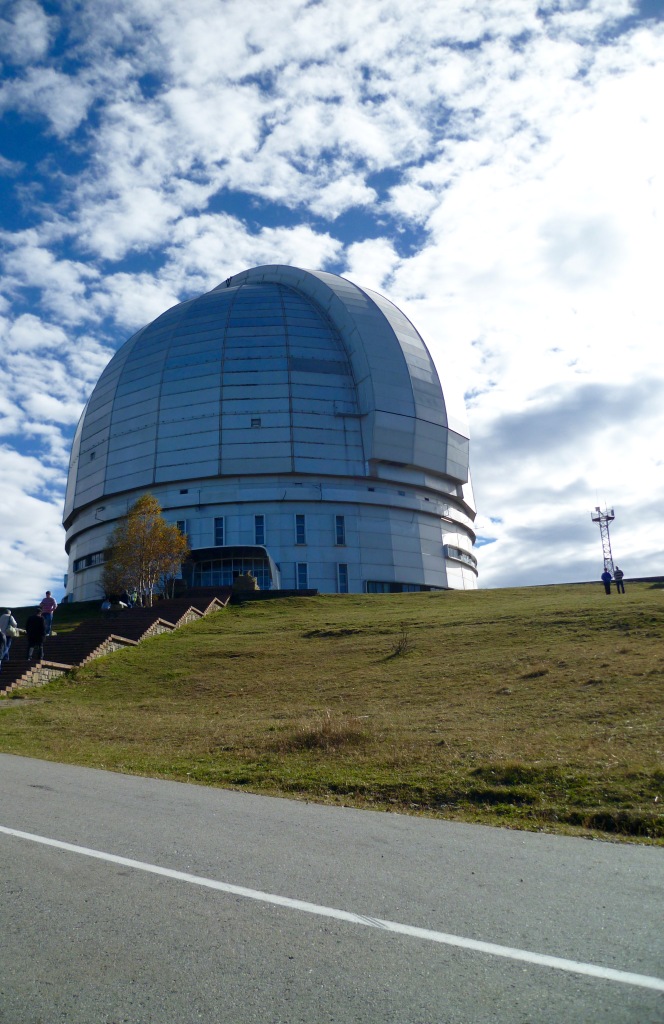 Anyhow, the view around the Large Alt-Azimuth Telescope was gorgeous. We photographed ourselves accordingly. 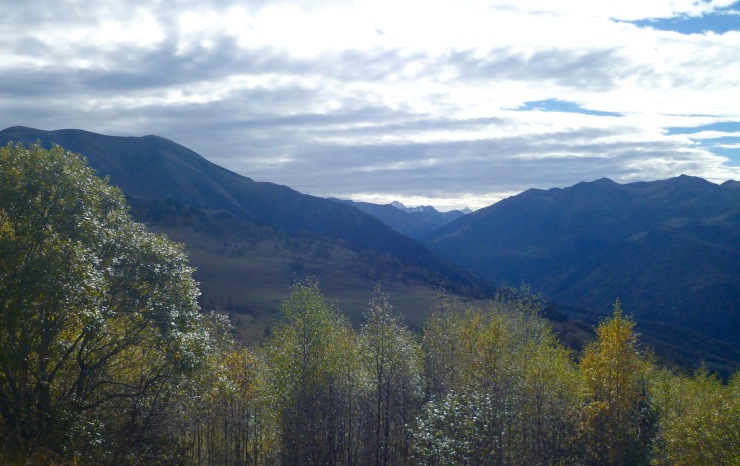 Inside, we got to learn all about the Soviet astronomy program. Construction on this telescope began in 1966 and the telescope was in operation by 1975. Until 1990, this was the largest telescope in the world. The telescope’s mirror has a six-meter diameter (20 ft.). The first attempt at the mirror had to be scrapped, so only the second one was installed. But after some use it turned out that the second mirror had some major imperfections as well. A third mirror was finally installed in 1978. Apparently things other than the mirror make it not an ideal place for observing, though. The weather often interferes. The dome has to be refrigerated year-round to combat some effects of the inner temperature of the dome being warmer than the outer temperature. But it’s still a very useful telescope for certain types of astronomy.

After returning to the dorm, we ate a quick lunch and I took a nap. We were told that for dinner we’d be having shashlyk, or shish-kebab. I imagined we’d be outside around the grill, so I wanted to rest up.

I got on all my cold-weather gear and heavy boots and made my way to the dining hall…where I was greeted by long, extravagantly-set tables laden with wine, vodka, and mineral water.   “Please, take a seat!” Sergei invited. “Banquet?” I asked. “Yes! Banquet!” three or four people answered. So yeah. Russian conference-goers love their banquets.

First course was boiled meat, followed by the second course of grilled meat. While we ate we exchanged more toasts (this time to our hosts at the Special Astronomical Observatory) and one by one people began to put on a sort of a show. Lyala was first—she danced a traditional dance. Then Sharif amazed us with a Tajik song that is sung with a plate. He sang at the plate and moved it around to vary the tone of the note. Seryozha then brought out his guitar and we had some good sing-alongs (even though this was kind of hard since so many of us were foreigners and we didn’t all know the songs…but I knew a few!). 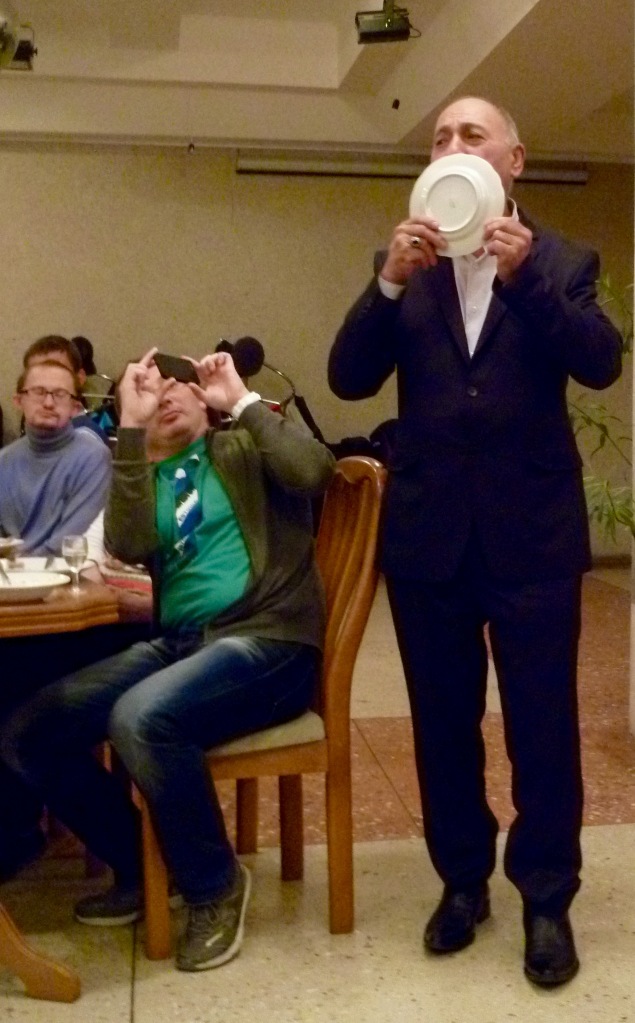 The dorm staff finished out the night by serving us a big hot bowl of broth. I was kind of skeptical at first because it looked really watery but OH MY GOD THIS BROTH. Glorious liquid meat.

Some folks went to bed but I managed to make it to the after-party, where songs and jokes continued late into the night. Look, there’s Olga Dmitrievna, one of the luminaries of the field, just chillin’ at the afterparty. 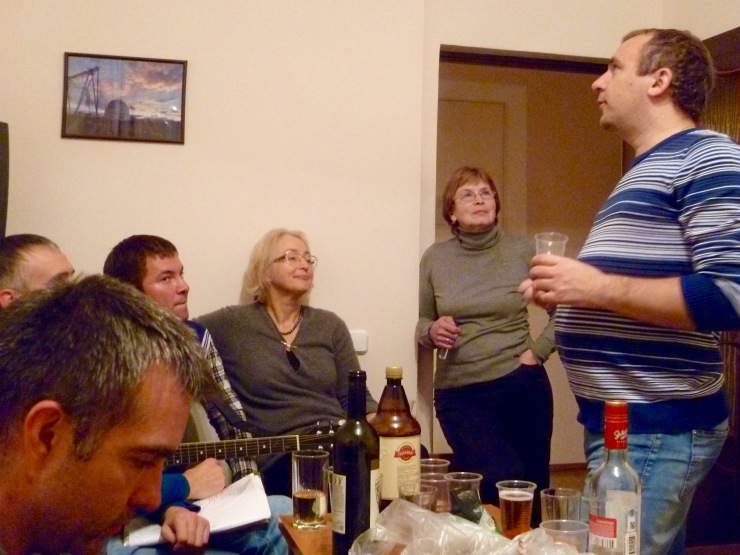 One thing about these banquets/parties that make them so great is there’s always someone sort-of in charge.  In Russian, this person is known as a tamada.  That person organizes the toasts, invites people to perform, energizes the crowd.  Sort of a combination master-of-ceremonies/hype-man.  Sharif spontaneously took on this role in all the banquets.  In the afterparty, Vasily, seen here standing, valiantly served.  I guess I like organized fun.  Why this should be any surprise, given me OCD tendencies, is beyond me.

That night Bhavna really understood what I meant when I said that I snore. Heck, I even woke myself up once through my earplugs.