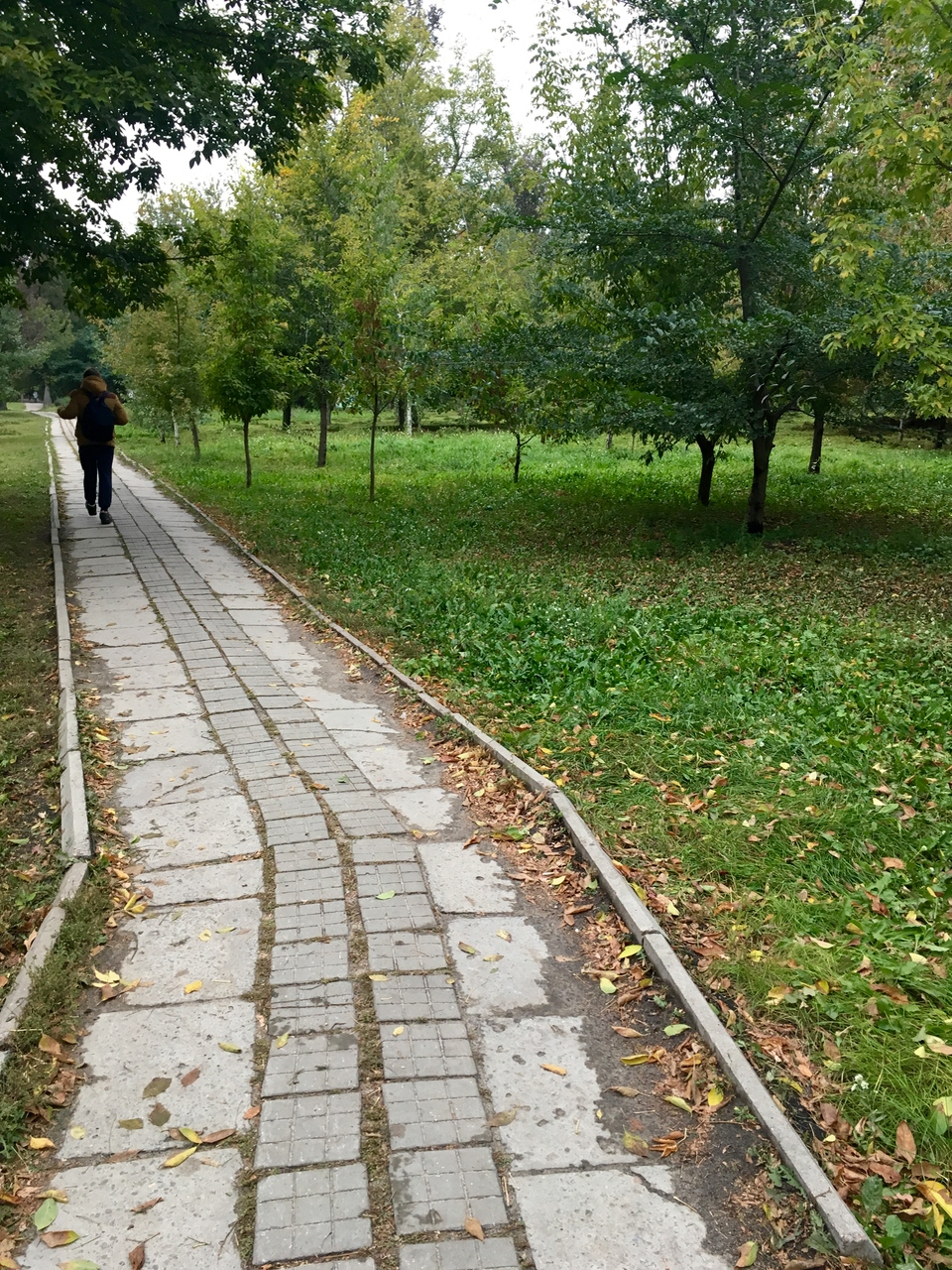 A walk through the part and then I'm home

Every day my alarm wakes me up but I struggle to get out of bed. Why is waking up so hard? Through sheer brute force of will, I force myself out of bed and into the kitchen. Sometimes I eat a real breakfast like eggs and toast, but more often than not I have a lazy breakfast of gingerbread and tea.

The sugar gets me going as I get myself ready for work. The choice of clothing is always dictated by my choice of shoes. If I’m not careful, I’ll wear the wrong shoes with the wrong socks and get horrible blisters from all the walking. I don’t have a full-length mirror, so I mostly try to imagine what my bottom-half looks like as I check my hair in the hall mirror. I leave with my briefcase, making sure to take both a shopping bag and an umbrella. Always Prepared! (This is the slogan of Soviet Pioneer children)

The stairs in the University are steep. Whenever I get to the third floor I think, aha, I’m finally here, but then realize I have one more floor to go. I’m always out of breath by the fourth floor and sweating profusely by the time I get in to my office. 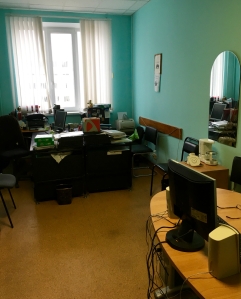 My office at the University has teal walls, and a brownish-beige laminate floor. I share with two other people, Natasha and Galya. No one ever turns on the lights in the office even though it’s generally darkish. There are two cacti on the plant shelf. I don’t see how they survive! We have a special key to use the restroom right next door. It is very specifically designed for putting your feet on either side of the toilet but I am always afraid I will fall in. Does anyone else have access to our restroom or is it just the three of us from this office? Whoever has access to it has brought some fancy soaps, although I don’t understand why since the soap provided by the university in the dispenser seems just fine. The hand dryer says BREEZE on it in slanted letters, as if it is being swept away by the air.

We have waste-paper baskets that are emptied every day by a woman who just sticks her bare hand in the trash and removes it. So it’s maybe only for paper? The other day Natasha gave me half an apple; I didn’t see what she did with her core so I just ate mine. Didn’t want to torture the trash-collecting-lady. Going to try to avoid apple-eating until I figure out this mystery.

This morning I have spent yet another several hours waiting for nothing to happen—this seems to be the norm around here, at least with me. I thought we had a meeting this morning to discuss my teaching schedule, but that never happened, once again. Getting my visa fixed has occupied, if you can call it that, the majority of my time.  It’s involved visiting various members of the university bureaucracy, many of whom came up with creative ways to either pass their responsibility off on some other member of the administration or some reason why a delay is justified. The idea of doing something in advance—because it will eventually be needed—is anathema to the system here.

The first time we went to see Ekaterina Evgenievna, I experienced immediate sympathy for my clients at home. She is the university’s visa specialist but has taken on the demeanor of an immigration official herself. Is this what I am like in my office? She grilled me about my previous visits to Russia, seemed disgusted at my photograph (wrong size! It’s in color!) and immediately told me I could not do anything I wanted in terms of travel. Forget about it, she said, it will cause a catastrophe for your visa situation. Ok, then…

Theoretically, I could sit in my warm apartment in my yoga pants every day, but I sense that I need to be here to nudge the process along, however slowly. Plus my presence keeps up the pretense that I am currently performing some sort of work here.

I can’t find my way around the University. It is basically a giant square, with entrances on at least three sides. But many of the hallways look alike and I am definitely lost unless I follow a strict trajectory from a certain entrance to my office. Today I got lost looking for the snack bar, but luckily I happened upon another snack bar. The snack bars all have a sign that says, “Some of our workers steal! Make sure you get a receipt or else we will have to raise prices.” They have great coffee, hot.  Which is good because they haven’t turned on the heating yet.

Days are divided between days when Natasha has to teach—in which she runs from class to class in a hurried frenzy—and days when she doesn’t have to teach. On those days, she generally arrives when she wants (taking time to go shoe shopping, for example) and, as far as I can tell, spends a lot of time doing nothing. Students are always coming around with issues for her to sort out and then as soon as she starts something else, someone interrupts her. But then also when Galya is here (on Thursdays), there’s a lot of joking around and chatting. And she always has to borrow paper from someone in order to print things. I feel like I should buy her some printer paper.

The head of the Institute has told me that, because the Institute also includes the Department of Tourism, at some point there will be an event organized whereby they take me on a tour of the city and engage in some sort of cultural education with me. Great, I say. I’m all for it. I’ll do whatever it is you want/need me to do. One thing I’ll be doing is presenting at a conference on international art education. Do I know anything about art education? But of course I agreed to participate, because they seemed to really want me to. At first they told me I should give a presentation about various landmarks in Tucson. That sounded wholly implausible—why would anyone want to hear about that here? So I talked to the conference organizer and they actually want me to talk about art education in the U.S. No matter that I’m a childless immigration lawyer—you want to know about art education in the U.S., I can find something out about it and give you a presentation on it. Or Tucson landmarks. Or native fish. Whatever you need, I’ll do it somehow!

Natasha and I go out to lunch everyday along with Inna, another woman in the department. Everyone seems to go out to lunch. With folks strapped for cash I can’t figure out why people don’t bring their lunches, except, I guess, there’s no good place for people to eat together. We generally go to one of two places. The first is Dobroe Kafe, which is cafeteria-style. I like their salads, but their main dishes leave much to be desired. Also, each plate is microwaved, which is a little odd. And I can’t get a look at the soups beforehand because they’re behind the counter.

The other place is Skovoroda, which I like best. It’s not crowded and has a cosy interior. I like it because it has the feel of a Russian country house, but if you’re actually Russian you might find that cheesy and irritating. There is no choice at Skovoroda—you get what they serve for lunch. A soup, a main course, and kompot. This is my ideal meal because I hate choosing—it causes me anxiety. But Natasha and Inna generally prefer Dobroe because of the choice factor. I’ve been told that when it’s raining we eat in the University cafeteria, which sucks, they assure me. We usually spend about 200 roubles for lunch ($3).

I guess you could say that lunch is kind of the highlight of my day, but it ‘s also a little strange. We mostly just talk about whether or not the food is good. Natasha is thinking of starting a diet based on a diet her former student has done—that former student has lost 40 kg (88 lbs), but the diet sounds like a pain in the ass. It seems to mostly be one of those low-carb diets and her friend has invented recipes for how to make low carb versions of everyday food. I’ve been invited along to cooking lesson. I’d normally jump at the chance but I’m worried about being caught up in some sort of diet insanity.

I generally walk home along the pedestrian streets even though the route is a little bit longer. It’s more pleasant than walking the main street. Making it home is hard, though, because the walk is uphill. In the late afternoons I tend to get a little cold and I’m a little tired and just want to get home quickly, but then there is the uphill trudge. And I keep hoping for an easier-than-easy stopping-off point to pick up groceries on the way home, but there isn’t one right on my way. I have to go a little bit out of my way. But this always feels like a really big deal since it’s uphill and I’m such a lazybones!

I make it home, have some dinner, and fall asleep to my upstairs neighbor practicing the piano. She’s very, very good. 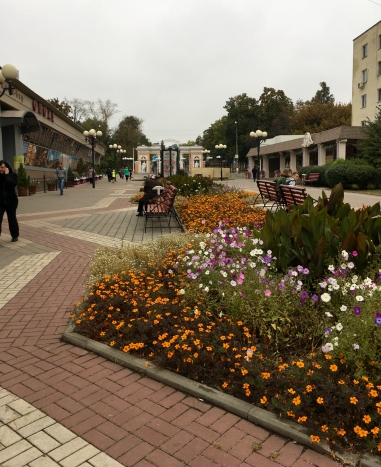 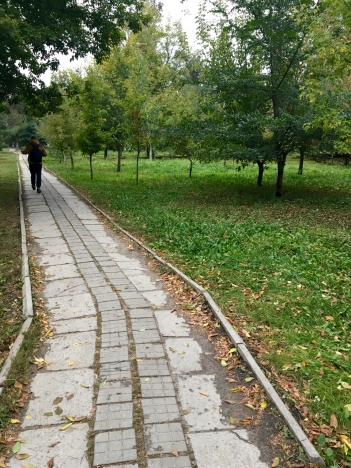 A walk through the part and then I’m home