This is a Russia travel blog, but part of this stint has involved traveling for conferences on migration. So twenty Russian scholars and I packed up and went to Vietnam for a week!   There were a few Japanese, Brazilian, Argentinian, and Burmese academics sprinkled in for good measure.

Most of us took an overnight flight from Moscow to Hanoi, landing in the late morning. While we waited for everyone to make it through customs I chatted with our host, Toan, and his young assistant Thanh. I met Toan last year at our conference in Stavropol, but Thanh was new to me. He had just graduated from Voronezh State University in Russia and his Russian was fantastic. It was much easier to communicate with him than with Toan, whose Russian is good but incomplete. I don’t know if it was a language problem, or just general confusion, but Toan showed up at the airport with 5 kilos of sweet potatoes for me and several other people. Because I’m planning for Thanksgiving dinner I had asked Toan in advance if there are sweet potatoes in Vietnam—I figured I’d take a few back to Russia with me. But now I’ve got 5 kilos to drag around Vietnam and, later, Belarus. I looked in the bag and noticed that Toan had also included two very ripe mangoes, that were now beginning to ooze. Thank you, Toan.

Our drive into Hanoi’s city center takes about an hour. I’m having trouble adjusting to being in a foreign country yet still surrounded by Russians. I get into a conversation with my seatmate about the Caucasus and Georgia and start to wish I had found some way to travel there instead. What am I doing in Vietnam?

As we enter the city, the Russians cheer at familiar sights: the statue of Lenin, children in red neckerchiefs, Ho Chi Minh’s mausoleum.   Vietnam is still nominally communist, and our host, Toan, is a respected party leader. But the Russians openly mock all of this business, with a sort of, “You can’t seriously still be doing this???” kind of attitude. 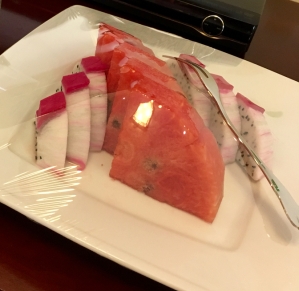 There are so many of us that we can’t all fit into one hotel, so we are spread across three hotels clustered right next to each other in Hanoi’s Old Town. Our bus disgorges the twenty or so of us and all our luggage into the middle of the narrow street while mopeds whiz around us and street sellers shoulder their produce to the side. The air is heavy with dampness and I’m immediately glistening with sweat. I make my way to the hotel and find that it is, blissfully, air-conditioned. A plate of fresh, and unrecognizable, fruit greeted me in my room. I found out later this was Dragon Fruit. 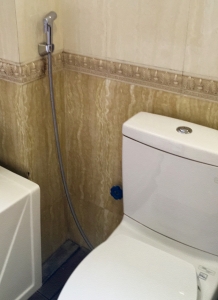 Groups are already forming, making plans for dinner and for sightseeing and I realize that I must escape. The five-minute walk from one hotel to the other, involving fifteen people navigating the crowded Hanoi street was just too much for me. I’m already feeling overwhelmed. So I beg off and try to organize myself. My suitcase is filled with dirty clothes since I’d just finished a week in Moscow, so I arrange for the hotel laundry and take a decadent bath in the spotless bathroom, which also includes this handy shower for your nether regions.  I went to lay down for a nap and I was suddenly confused.  All the lights were on in my room, but I couldn’t find a light switch anywhere. I wound up calling the front desk, explained my complete ineptitude, and they sent someone to teach me how to use this console:

It was a sort of master-controller for all the room’s lights.  The Russians told me later that they were well acquainted with this “Orbita” technology, although I can’t figure out why because I’ve never encountered it in a Russian hotel.

At this point you’re probably wondering, “Is she ever going to show us Vietnam? Who cares about the damn hotel room!” And, yes, I did take a short walk to change money and eat. But I didn’t really get into Vietnam Vietnam until two days later, after our conference.

I’m still amazed at just the logistics of the conference.  It was in three languages with simultaneous translation via audiophone.  A bust of Ho Chi Minh oversaw the proceedings.

The stories I heard about migration in Asia sound just like the stories I encounter every day in my immigration law practice back home in Arizona.  For example, there is a high number of undocumetned workers in Malaysia.  This has led to problems with profit-seeking agents (middlemen) of all stripes, including human trafficking.  Additionally, there’s the prejudice and mis-perception that foreign workers are responsible for crime.  Sound familiar?  I also learned that there is a three-way migration in Southeast Asia: Vietnamese go to Cambodia, Cambodians go to Thailand.  One speaker recalled the words of UN Secretary General Ban Ki-moon: “Refugees and migrants are not “others”; they are as diverse as the human family itself.  Movements of people are a quintessentially global phenomenon that demands a global sharing of responsibility.”  Can I tattoo this on my forehead and shout it from the rooftops?

After a long day of conferencing, we were loaded back onto our bus to have a celebratory dinner.

The dinner was just as overwhelming to me as everything else in Hanoi thus far.  There were a million of us at two long tables for an all-you-can-eat buffet.  I had trouble deciding what to eat because there was so much food, but the Russians near me were over the moon for the seafood.  I must admit I had some very tasty snails.  I wish I’d had more time to explore the noodle soup station because it looked very intriguing.  I did get some soup, but I wasn’t adept at picking my ingredients from everything on offer.

I spent most of the evening trying to understand my seat-mate, a woman from Myanmar, whose English was not what I would call comprehensible.  But I did understand this:  she had a great passion for ice cream, although she claims that the ice cream in Myanmar is far superior to that of Vietnam. 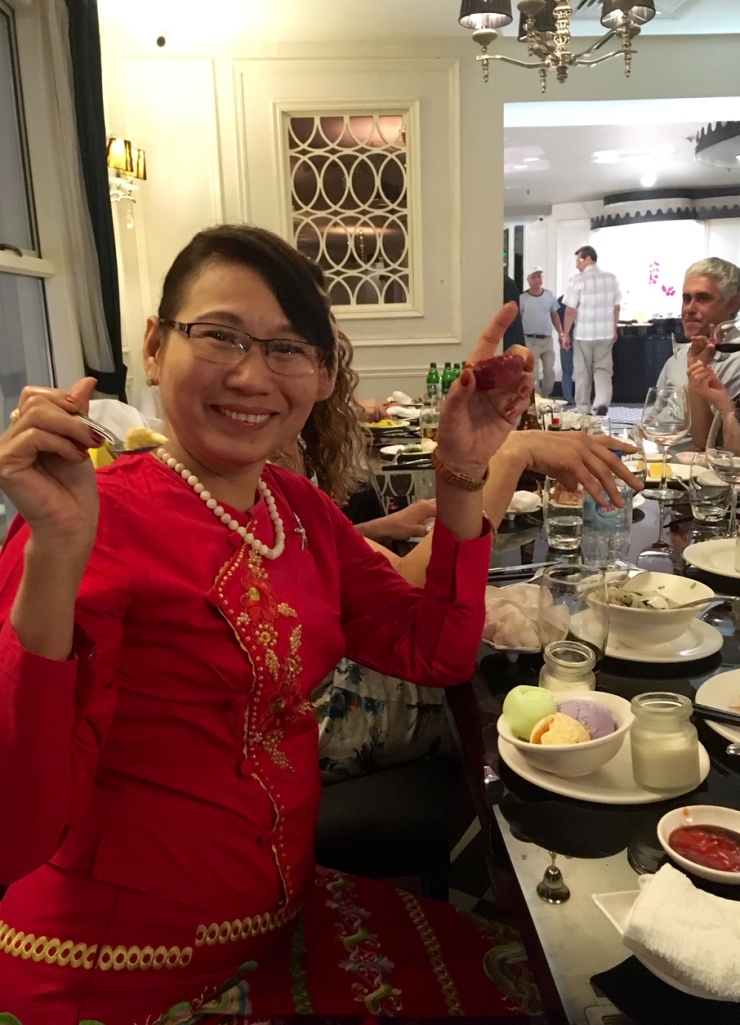 I walked back to the hotel with a few people from the dinner.  We got a little bit lost, but eventually found the way.  The heat, the crowds, the noise…it was all too much for me that day.  I shut myself into my hotel room and hermitted until morning.