Group travel had seriously stressed me out.  The third day in Hanoi I did my best to avoid the group at all costs, setting up a private motorbike tour in the afternoon.   But just as I was leaving the hotel for breakfast I heard, “Rachel! Rachel!” from the balcony of a neighboring hotel.  Before I knew it I was pulled into a taxi going downtown to the Temple of Literature.   My companion tired of my insistence on food and coffee, so we separated, thank goodness. I decided I would walk back to the hotel, which I estimated would take about half an hour.

Well, as I’ve explained on this blog before, I’m terrible at orientation. And before I knew it I had walked off the edge of my flimsy hotel map.  But Vietnamese traffic police are incredibly friendly to foreigners.  As soon as you stop to look at your map one of them comes up and gives you directions.  This happened to me at least four times that morning.  But it still took me three hours to get back.  I kept getting distracted.  Look at these streets! 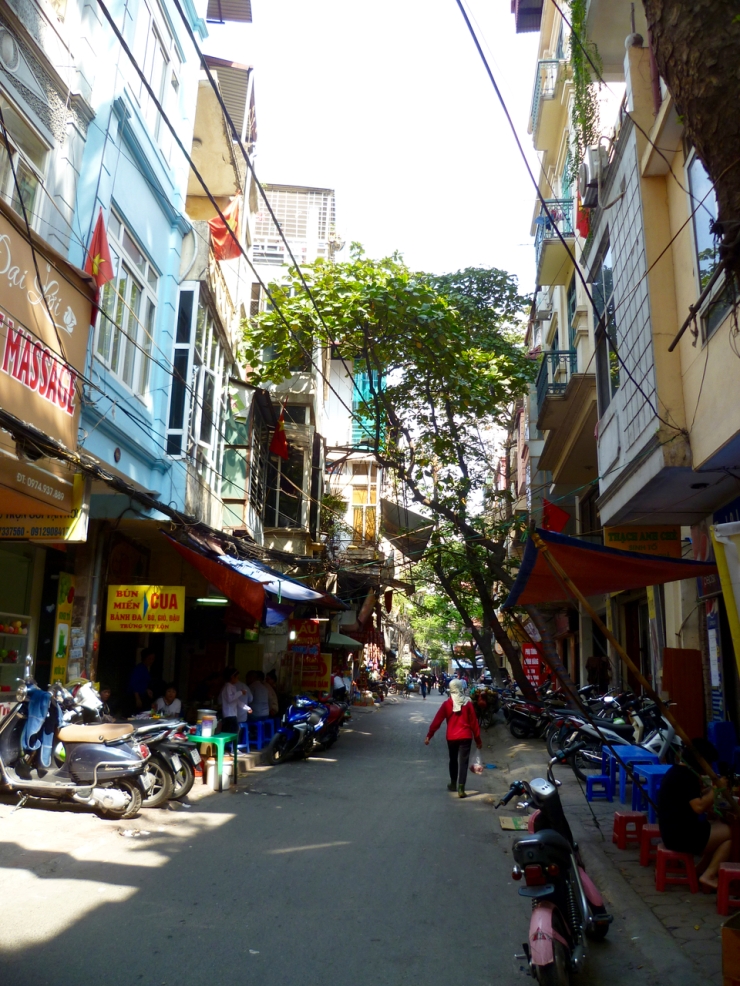 It took me a while to realize that the sidewalks are for motorbike parking.  People are meant to walk in the street, along with the cars and buses.  It’s quite unnerving, as you can imagine. 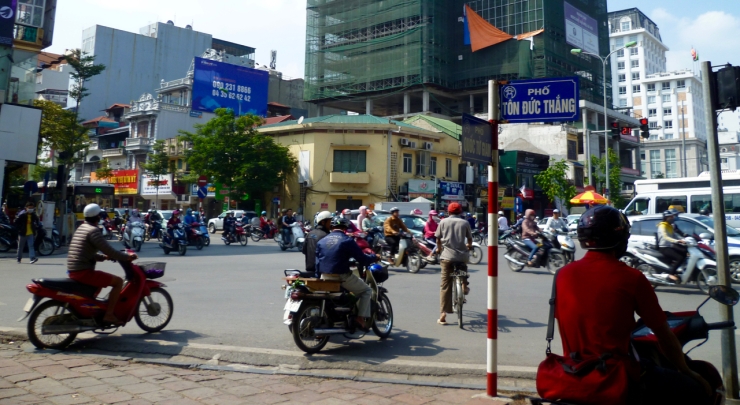 It was really, really hot.  I’m from Arizona where it’s goddamn hot, but this heat was damp, sticky and heavy.  I felt like I was swimming through the steamy air. The sun was taking its toll on me so I stopped to buy a hat. It was a strange encounter because the man quoted me one price, which I was prepared to pay, but then immediately dropped it in half, for some reason.  He must not have ever met a person quite as desperate for a hat as I was.

After a while I felt like I would throw up for sure. So I darted into a cafe for an iced fruit juice.  I sat on the sidewalk cooling off and regrouping. 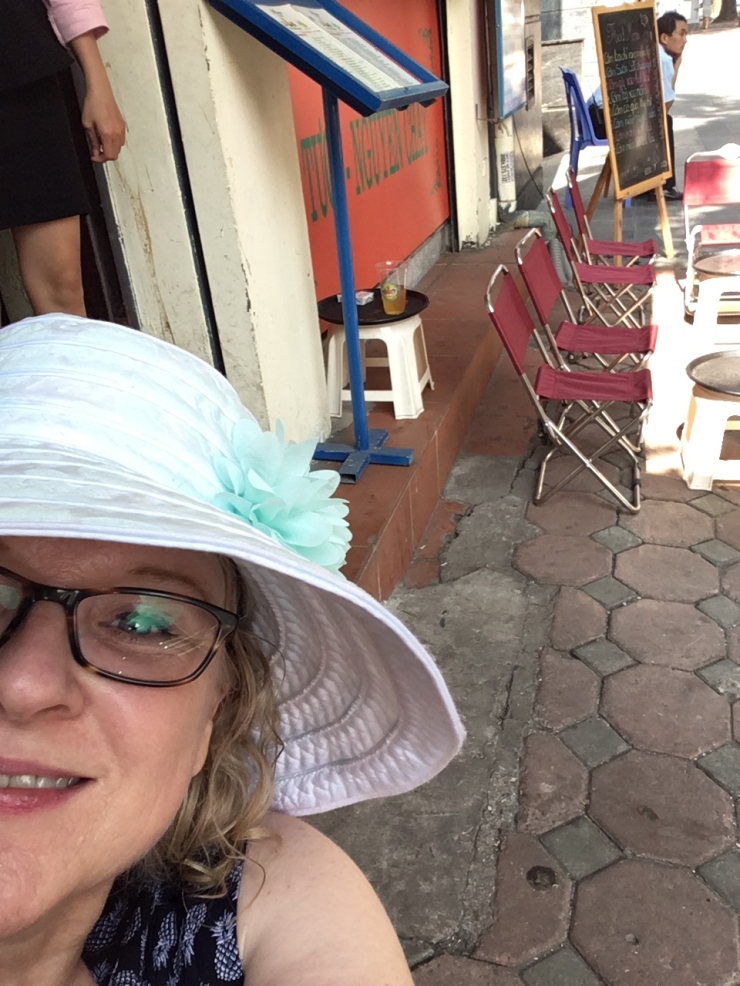 That’s what you do in Hanoi– you sit on tiny stools on the sidewalk.  I praised god and my grandma’s genes for my five-foot-zero stature.

Once I recovered a little I set off again.  By now I was so hot that I really didn’t care whether or not I was in the street and this is EXACTLY how you do it.  You just walk– slowly– and everyone moves around you.  If you make a sudden movement, you scare everyone.  It took me nearly fainting from heat exhaustion to realize this, but you’ve got to be chill in Hanoi. You don’t hurry when you’re on foot and you just walk, street, sidewalk, wherever.

I got to my hotel and re-coated myself in sunscreen to prepare for my tour. Turns out, motorbike is definitely the way to see this city because it’s like a cool breeze is always blowing on your face.  My hotel set me up with a guide named Ian (surely that’s not his actual Vietnamese name) and he handed me a helmet and I hopped on.  Whoosh! Off we went into the fray. 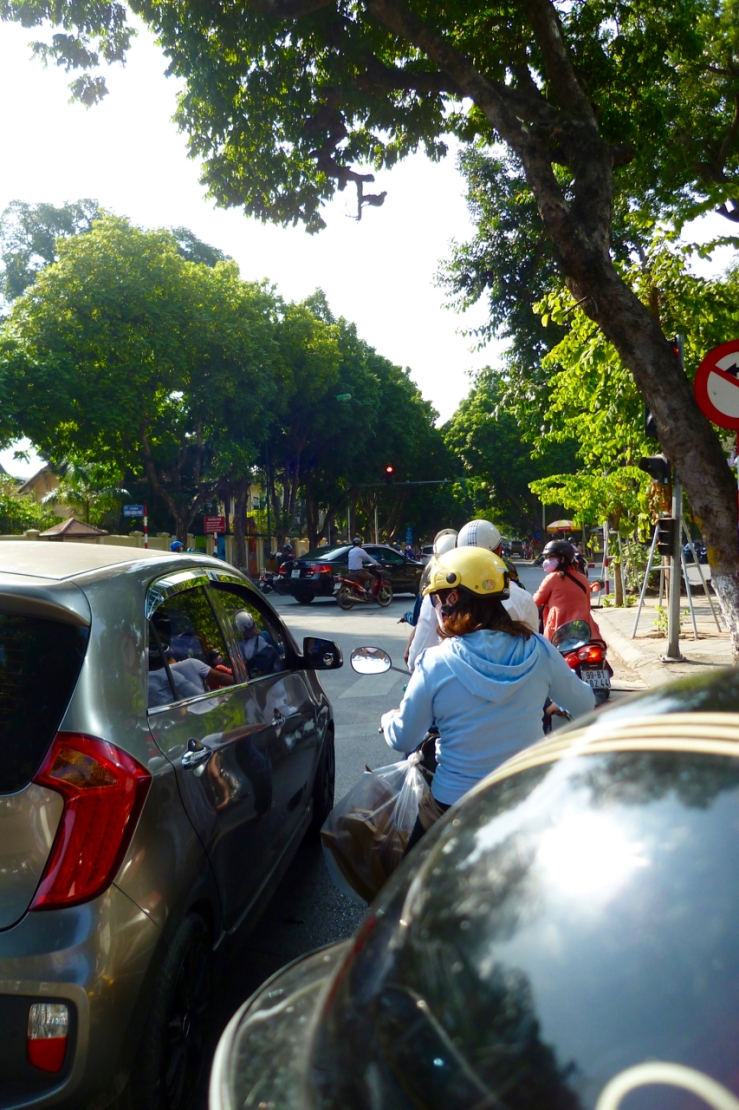 Most motorbikers wear surgical-type masks, some of them decorated in high-fashion style.  I asked Ian about this. He says it’s mainly so you don’t get your face dirty; it’s not really about pollution.  Look!  There’s Lenin: 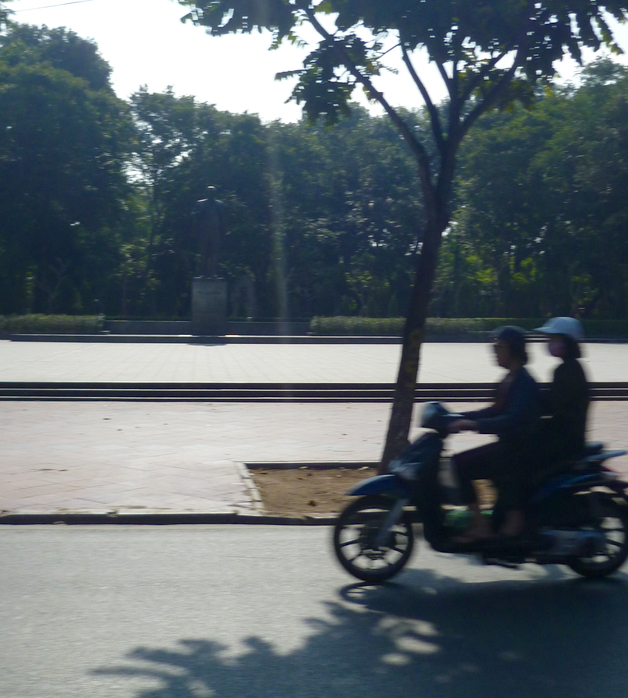 First up was Ho Chi Minh’s mausoleum.  Apparently, Ho Chi Minh is on display in his mausoleum much like Lenin is in Moscow.  According to Ian, only Moscow has the special technology required for the upkeep so the world’s three mummified leaders, Lenin, Ho Chi Minh, and Mao Zedong, are all cared for by Moscow technicians.  The timing was wrong for visiting the interior of the mausoleum so we just saw the exterior.

The slogan on the sign apparently means something like, “Viva Vietnam!”  I can’t pretend to know anything about Vietnam’s current political situation– I’m a Russianist!  But I do know that the country is still nominally socialist.  And even though it appears that many of the country’s socialist ways have changed, Ho Chi Minh is still revered.  This mausoleum was built during what we call the Vietnam War (they call the American War), when the country had almost no money. People sent donations in from everywhere to cover the cost of construction.  Given how revered Ho Chi Minh was, I can’t imagine the effect his death had on the population during the war.

I asked Ian why Vietnamese are so friendly to Americans.  He said that the Vietnamese people, especially the younger Vietnamese, harbor no ill will toward the United States because they were seen to be fighting the communists, not the Vietnamese people.  In contrast, he said there is still some lingering resentment of the French, who colonized Vietnam before the war.  He said the French are remembered as particularly cruel.   I wonder if Ian’s perspective is influenced by the fact that we are in North Vietnam, not South.  The North suffered heavy bombing, but nothing like the devastation suffered in South Vietnam. I don’t know the answer to this question and I’m unlikely to find out.

Next we went to Ho Chi Minh’s residence.  Even though a palace was reserved for him (a lavish building that remained from French colonial times), Ho preferred a modest residence.  He lived a spartan existence while leading Vietnam.  He never married and never had children. His whole life was devoted to improving Vietnam.  Here’s his study (note Marx and Lenin!): 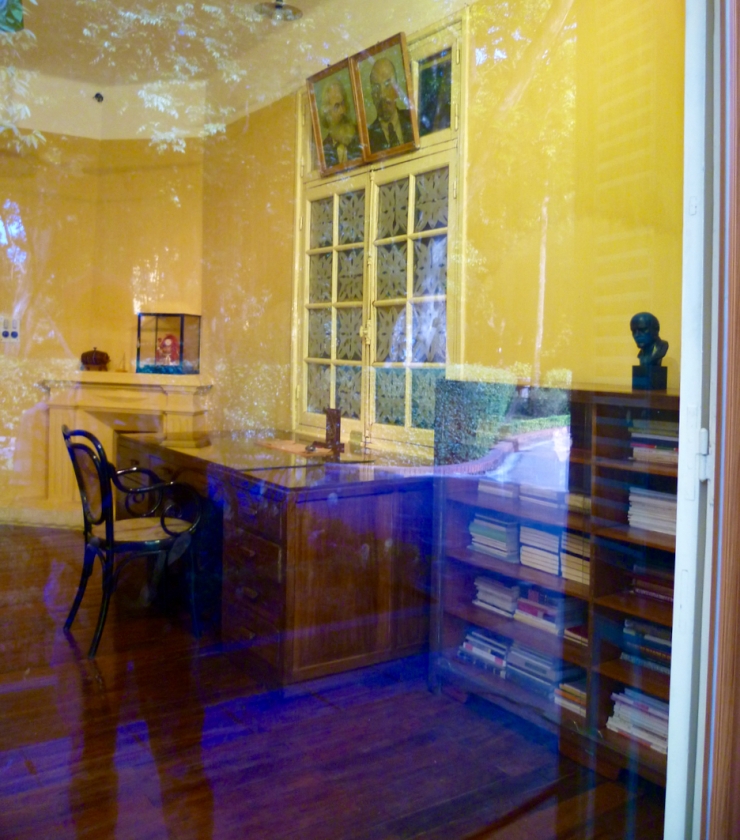 The area around the house has a gorgeous botanical garden and pond, where Ho would feed the carp every morning. 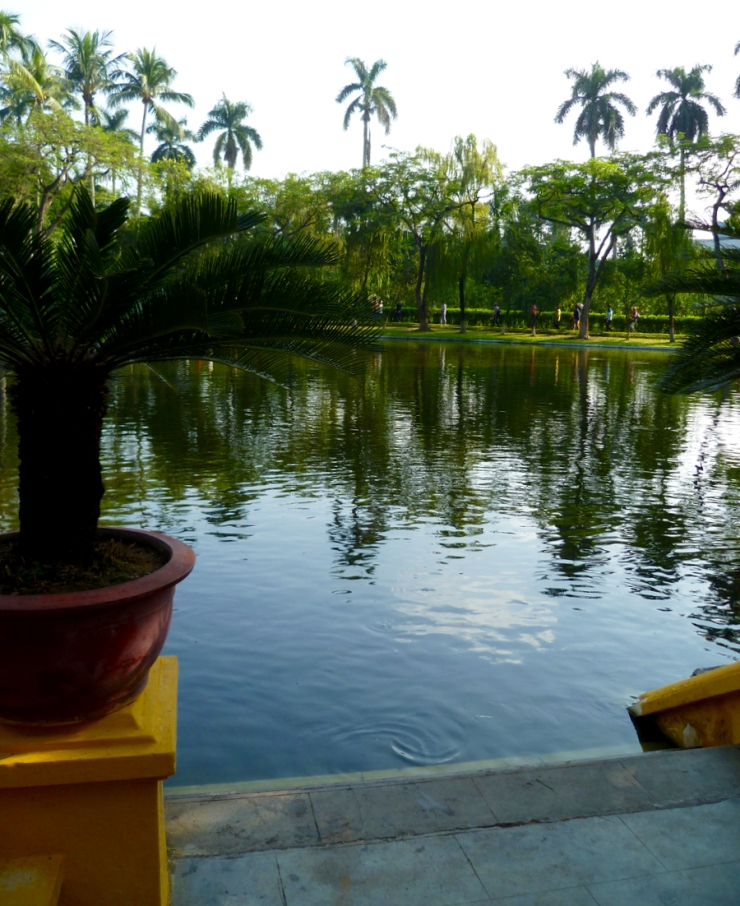 Next we saw the One-Pillar Pagoda, a sacred Buddhist temple destroyed by the French and reconstructed after Vietnam’s independence.  It is designed to look like a Lotus flower, a symbol of purity. 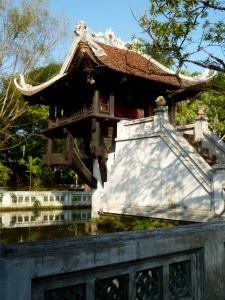 We sat down for a moment to rest and while we did a young couple dressed in traditional clothing came to be photographed in front of the building.  The photographer directed their movements and strategically placed a large portrait of Ho Chi Minh right next to them for every photograph.  Ian said this was an indigenous couple from the mountain areas celebrating their wedding.  He estimated they were about fourteen years old– that’s pretty common still in the mountains, he said. I asked him to ask the couple if I could take their photo but they didn’t respond.  Ian said to take their photo anyway, but… no.  Couldn’t do it.

We zipped along the streets some more and came to the Trấn Quốc pagoda, built in the sixth century! Ian explained quite a bit to me about the type of Buddhism practiced at this pagoda and, if I understand it correctly, it is the same Buddhism as is practiced at the Buddhist temple I visited in Russia outside Ulan-Ude.  There are some special differences, but, apparently, they are closely related.  It’s quite complicated.  But it was a gorgeous pagoda. 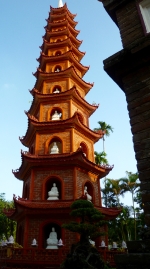 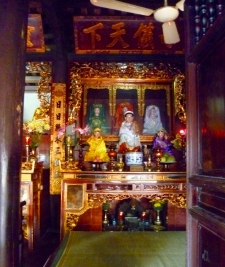 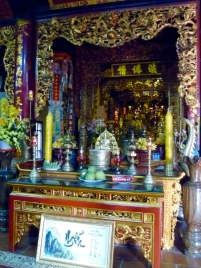 The last part of my tour was the best, naturally, because it was the food part.  First we stopped off for some spring rolls.  Delicious.  While we ate, I asked Ian a little more about life in Vietnam.  Are Ho Chi Minh’s ideals still in practice at all?  No, he answered.  Ian said that after Ho’s death his ideas were perverted and twisted by various leaders for their own personal gain.  The country is still very poor.  He described his childhood, where three generations of family all live together in one house.  If I remember correctly, he is the oldest of six.  Children cooked the food for the family because everyone else was out farming.  He said, though, that every night was a little like a holiday since the entire family would all eat together at once.

This has changed.  Ian and his wife and child now live separate from the family, just outside the city.  His wife also works in hospitality.  They work to support their parents, who are now elderly and live on their own.  It’s a problem we middle-agers all have, isn’t it?  How can we make sure we take care of our parents but also live our own lives?

Next, Ian took me to a noodle soup place located in the crook of a street.  We talked about how he had lived for a time in Tokyo, working and sending money home to his family. Sounds a lot like what I heard about at our conference.  He decided to stop, though, because it was just too difficult, being away from his wife. 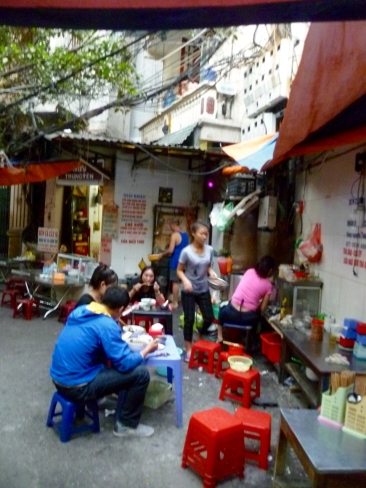 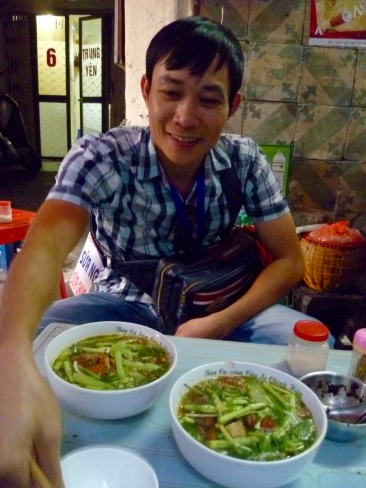 It was starting to get dark and the streets got even more crowded. 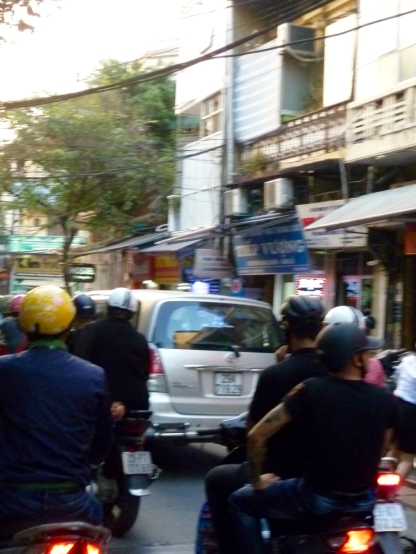 We stopped off for sticky rice and, afterwards, egg coffee–which is delicious, sweet coffee that somehow has egg in it. 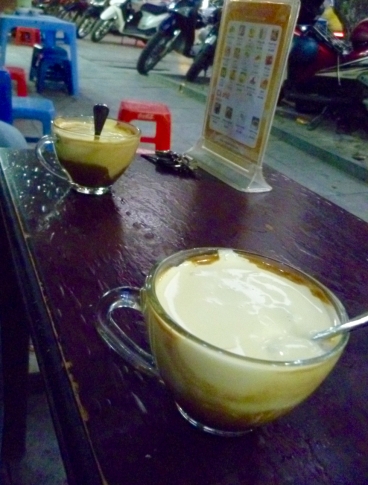 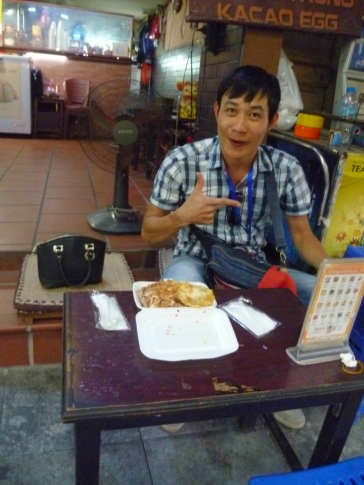 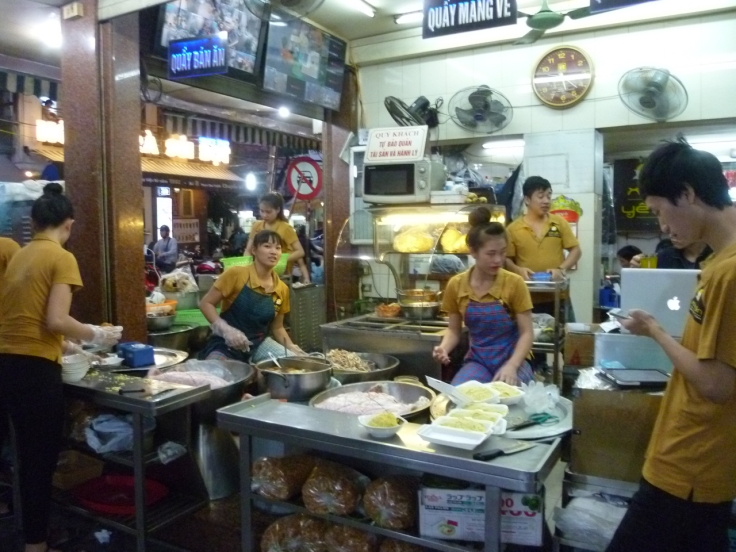 Ian dropped me and my full belly off at the hotel and I fell right into bed.  Traveling in Vietnam turned out to be so exhausting to me– a combination of the heat, the crowds, and, I think, the sensory overload. I began to wonder how much I actually enjoy travel in general.  Is it travel I enjoy or is it temporary residence abroad that I enjoy?

Next up:  party boat with Russians in Ha Long Bay.  Boney M all the way, baby.