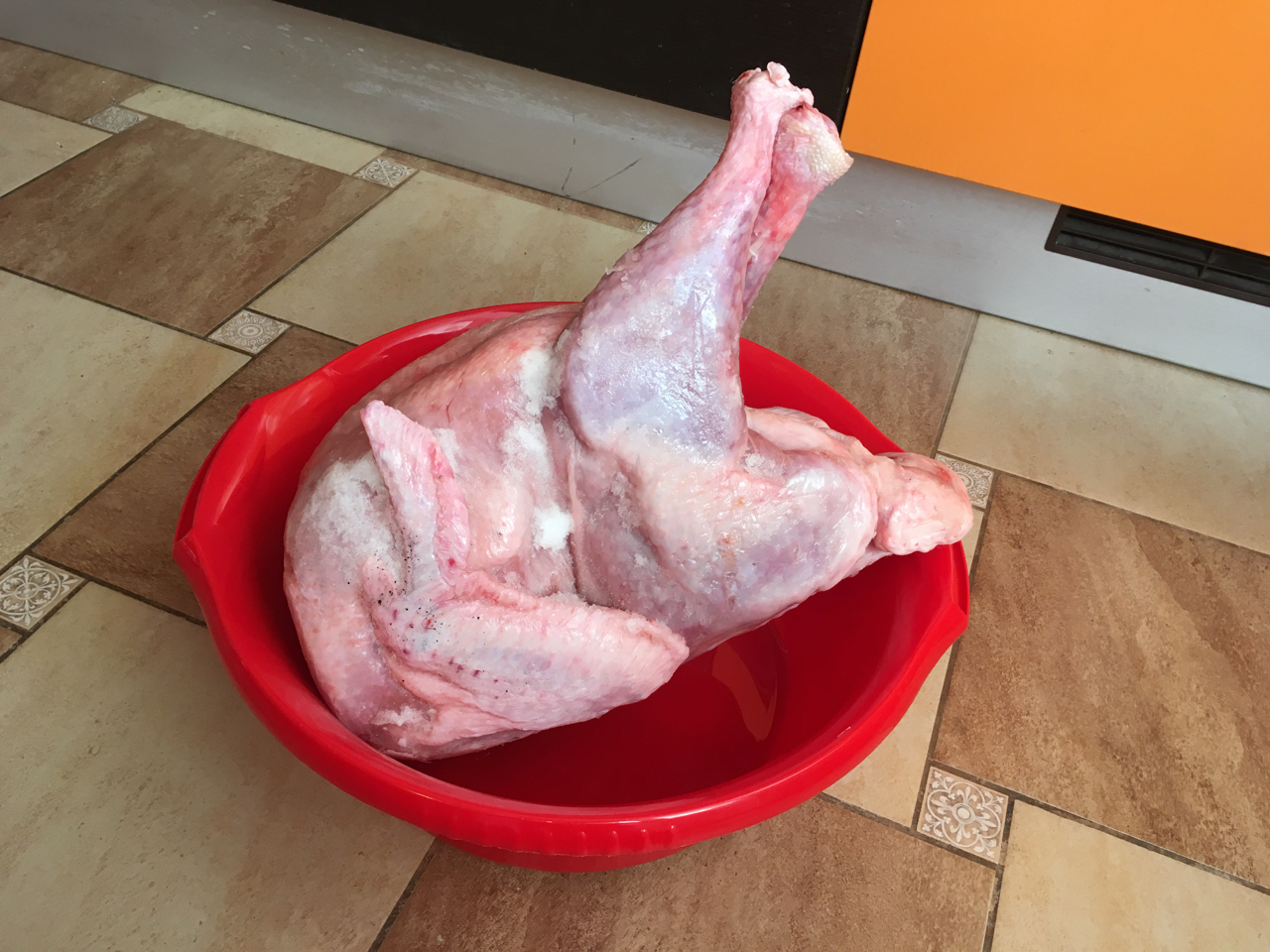 Theoretically, I should be writing about all the things that have happened to me over the last couple of weeks, like my friend’s Moscow wedding (Vegas-style quickie followed by Scottish bagpipes in an Irish bar) and my trip to hipster Minsk, where sites of Nazi atrocities lurk in the shadows of wine bars. And I’ll get to these things, I will, but right now my mind is consumed with thoughts of food. Not delicious thoughts, either, I’m afraid. So bear with me.

Recently, a friend of mine here in Belgorod traveled to the United States and had this to say about the cuisine: “It is terrible! I watched in horror as a colleague ate his lunch: he poured himself a cup of coffee, ate a Snickers, ate some Skittles, and then, presumably for dessert, ate some radioactive-looking candy orange slices.” I’ve seen lunches this sad—we all have. While maybe not everyone’s lunch, this is a variation on a theme we’ve all eaten at one time or another. “There are basically two extremes in America,” he said. “The hyper-health-conscious, constantly working-out and obsessing about their diet, and the vast masses who eat nothing but fast and processed foods.”

He was surprised, then, when he ate Thanksgiving dinner at my place and enjoyed it. At first, the explanation for this seemed self-evident to me: home-cooking is always better, period. He just hadn’t had any home cooking in America, so that’s why he didn’t enjoy the food, right? But the more I thought about it, the more I realized how patently obvious it is to any traveler that we have some seriously fucked-up issues when it comes to feeding ourselves, home cooking or not. The majority of our food is truly and irredeemably repulsive.

Let’s take two of the most common items on the Thanksgiving table: stuffing and green bean casserole. I know, I know, thinking about them makes me hungry, too. But try to imagine tasting green bean casserole for the first time in your entire life: is this something you would actually willingly eat? And stuffing—forget all the times your mother put spoonfulls of it on your plate and instead ask yourself: does this taste good? I’ve come to the conclusion that, objectively, these are not tasty dishes, and they’re not good nutritionally, either. These are dishes we love in the same way that we love our smelly uncle with the dipping habit. They’re family, so there’s always a place for them at our table.

But the star of the Thanksgiving table, the turkey, really is good, if it’s cooked the right way. Moist, roasted meat is food that is objectively good, and it’s good for you, too. But we Americans often can’t tell the difference between the turkey and the green bean casserole, between the truly good and the emotionally good.

This, in a nutshell, is what is wrong with American cuisine. It started around the time of the Second World War, which, for complicated historical and economic reasons, was when we began eating shit. And that shit was Spam.  But after the war was over we were somehow brainwashed into believing that mass-produced, processed food was better tasting and better for us than real food. This is super clear from the ads of the time, featuring, variously: fake cheese, fake soup, fake meat, and fake…WTF? 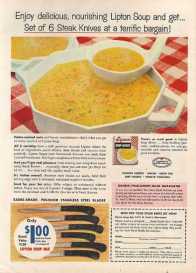 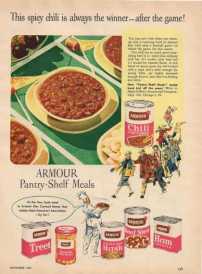 But these ads didn’t just teach us that processed food was better, they taught us that this was how to join the middle class. Only lower classes ate messy, irregular fresh vegetables and meats; the middle class ate the new standardized food, made “clean” and uniform through technology.  Getting ahead meant leaving your centuries-old ethnic food behind in favor of this sterile and homogenized American “food.”

My mother cooked this way. Our family was explicitly, almost hyperbolically, aspirational: Dad’s white-collar job catapulted us solidly into the middle class from what had until then been a decidedly working-class milieu. We ate fried baloney on white bread for years without questioning its utility or taste. This cheap, long-lasting (possibly never decomposing, as in the Twinkie) food fed a nation for decades and became the mainstream. Eventually everyone was eating the new food, working- and middle-class alike.

But over time we started looking at our waistlines and our diabetes diagnoses and we realized that a lot of our food was making us sick and fat. Sadly, it was too late: we had fed ourselves so cheaply on this food for so long that attempting to reintroduce real foods into the equation proved impracticable and overly expensive. Now only the wealthy can afford real food. I find it hilariously tragic that author Michael Pollan, in drafting his rules for eating (“Eat food. Not too much. Mostly plants.”), had to define what “food” even is.  But it’s an oversimplification to just say that real food is too expensive for most people; in the United States, cost is not a guarantee of culinary integrity. Many of us don’t even want fresh foods anymore! Those are not the foods we grew up on. After a long day of work, we usually want to come home to something familiar that reminds us of childhood, like Kraft macaroni and cheese. After all, these days the wealthy also eat macaroni and cheese, they just use fancier pastas and imported cheeses. In contrast, the health nuts often latch onto trends that feel like an ordeal. I’m looking straight at you, kale. Your Vitamin A and C may make you a nutritional saint, but remember that only the good die young.

(BTW, Kraft mac and cheese is now apparently free of artificial flavors, preservatives, and dyes, according to their website.  And yet, “We wanted to make sure it still tasted like the Kraft Mac & Cheese you know and love.” In other words, they made it real-er than it used to be but made sure it still tastes fake because otherwise we won’t like it.)

So if you come to the United States you have some very perverse eating options. On the one hand, you can eat a cheap and filling meal of utter trash that will nominally provide you with fuel but also make you hate yourself. Or you can buy an expensive meal that contains fresh ingredients, but which probably also features elements from the canon of American comfort food—food that was, by design, purely artificial. Food that is maybe only emotionally good. To eat well in the United States, you’re better off with food that hasn’t been adulterated by the legacy of American artificial food: ethnic cuisines. Food made by immigrants who never underwent the class shift toward processed food and also have no need or desire to self-consciously promote their food’s dietary virtue.

In contrast, it is easy to find a solid, filling, healthy meal in Russia– it is called the “business lunch.” Most restaurants serve some version of it, but the basics are the same everywhere: a soup, a main course and a drink for less than five dollars.   Sometimes there is a choice of soup or main dish, sometimes not. This lunch, at least among people I know, is that main meal of the day. Breakfast and dinner can therefore be a little less filling or maybe even a little less healthy because you’ve got your basics down. And because the meal isn’t laden with the emotional baggage of fifty-plus years of fake foodery, it won’t make you fat, either.

We have nothing at all even remotely like this in the United States, a state of affairs that leads to the coffee-and-Snickers lunch of the man described above. Or my own non-solution, the non-lunch.  Since lunch creates a problem I just skip it.  You see, even I, a member of the upper middle class, who can afford to feed myself however I choose, can’t seem to get the job done properly in the U.S.

My fellow Americans, for the last half century our mothers lovingly gave us food that they truly believed was the best food on the planet.  Food that they believed would not only nourish us but also increase our social standing and our access to The American Dream. We know now that this is not the case.  And yet, we still can’t escape–because the food you know is the food you love, even if it’s not food at all.

You might even want to substitute the word “democracy” for “food” in the last paragraph. Maybe.