December was kind of a crazy month for me– I traveled to Moscow twice, visited my parents in Alabama, and even made a stop-in at my hometown in Tucson.  Here it is January 11 and I’m frankly still exhausted. But in my two trips to Moscow I managed to spend quite a bit of time in the Gorky Park area and, let me tell you, it’s pretty cool what’s going on there.

First, here’s me looking like an academic-type at Moscow’s Financial University. It’s not just all fun and games and beets over here, you know? 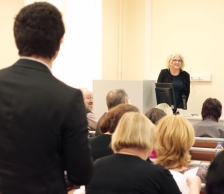 But back to the Gorky Park stuff.  Actually, let’s start across the street at the New Tretyakov Gallery, which is surrounded by an outdoor sculpture museum/park/recreational complex known as the MUZEON.  A few years back I had a very frustrating experience at the New Tretyakov Gallery, but the winds of change have come to the gallery!  First, there’s a new, colorful facade.

Second, the museum has launched an educational project in the metro called XX Intensive— a crash course in Twentieth-Century Russian art.  The metro station Park Kultury is now covered in posters explaining the progression from avant-garde art through constructivism.  In February they will start describing Soviet realist art.  I’m having trouble figuring out if this is more than just a marketing campaign because I haven’t actually been back inside the museum itself yet.  But the metro sure makes me want to go back in.

On the day I was there I couldn’t make myself go inside; it was too beautiful outdoors.   Moscow was in peak performance of its winter persona.  So I wandered through the MUZEON.

This is no ordinary sculpture garden; it’s a public way to grapple with art that is no longer comfortable.  Remember that in 1991 a group of conspirators plotted a coup against Mikhail Gorbachev and failed.  Soon after, the Soviet state fell.  But what to do with all the official Soviet art?  There are several problems here: 1) it’s history.  You can’t escape your history just by destroying artifacts of the past and someday, after all, you may have a need to look at those artifacts with fresh eyes.  2) some of it is remarkably good art.  As monuments starting coming down, many of them wound up in the area that is now the MUZEON.  I remember coming here when it was just a dumping ground for monuments…you could see them laying all over, on their sides, cracked apart by rage and/or weather.  But now this has become a proper sculpture museum:  the monuments have been turned upright, labeled, and placed in a somewhat organized arrangement.  Trees planted in the 90s have matured.  Additional, non-monument sculptures have been added.  The portion that runs along the river has been turned into a recreation zone with bike and walking paths.  People even gather there for group yoga classes in the warmer months.  In short, it’s simply a lovely public space.

The most famous monument in the collection is probably Iron Felix.  This is the statute of Felix Dzerzhinsky, the founder of the secret police, that used to stand in front of KGB headquarters.  Weighing over 11 tons, it was dramatically dismantled on the night of August 23, 1991.  The previous night protestors almost toppled this symbol of Soviet repression, but the Moscow City Council stepped in to provide an orderly removal so that the metro station underneath wouldn’t be harmed.  Looking back at the video today, do you get chills?

It was dumped in the area of today’s MUZEON, but it now stands upright on its base.

For years you could see the graffiti, but weather has now mostly washed it all away.

The other monuments are interesting, too, if less dramatic. A little Brezhnev, anyone? 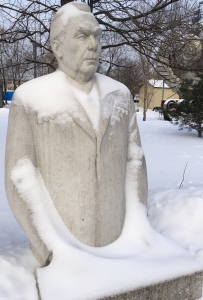 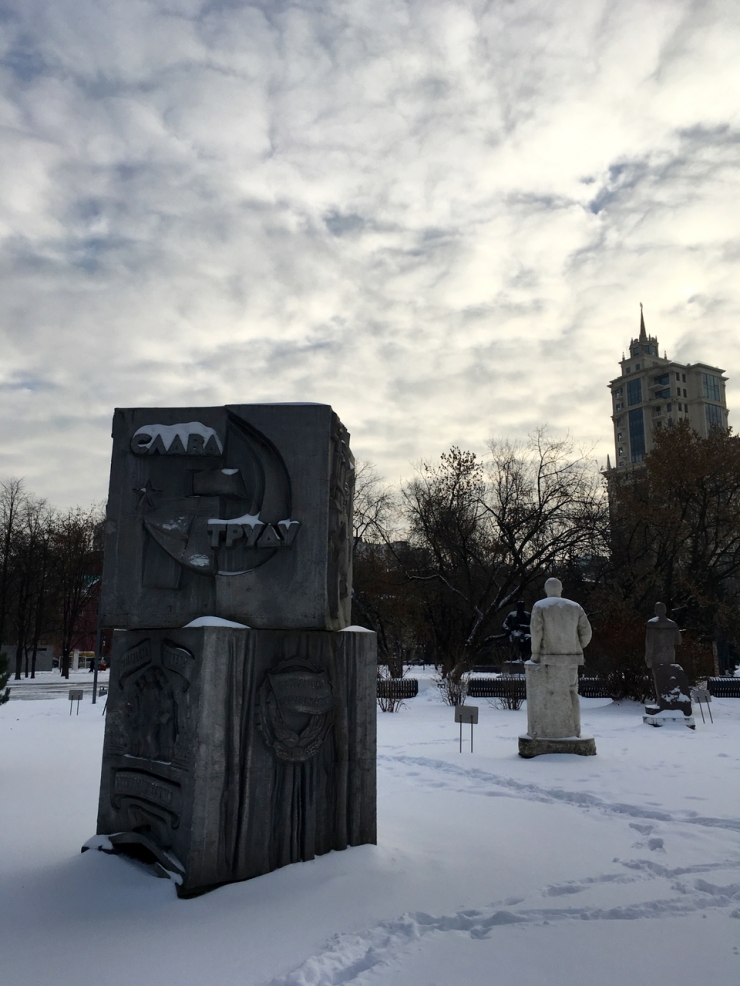 What to do with a monument to Stalin?  Many of them were simply destroyed.  But this once survived, even though his nose was bashed in.  Appropriately, he stands in front of a work entitled, “In memory of the victims of repression.”  The figures are all townspeople the artist knew who had suffered forced collectivization, exile, and other abuses.

From the bridge across the river, you can see Tsereteli’s controversial monument to Peter the Great.  It is controversial because a) St. Petersburg is really Peter’s city, not Moscow; and b) the monument is hideously ugly.  Try not to look at it. 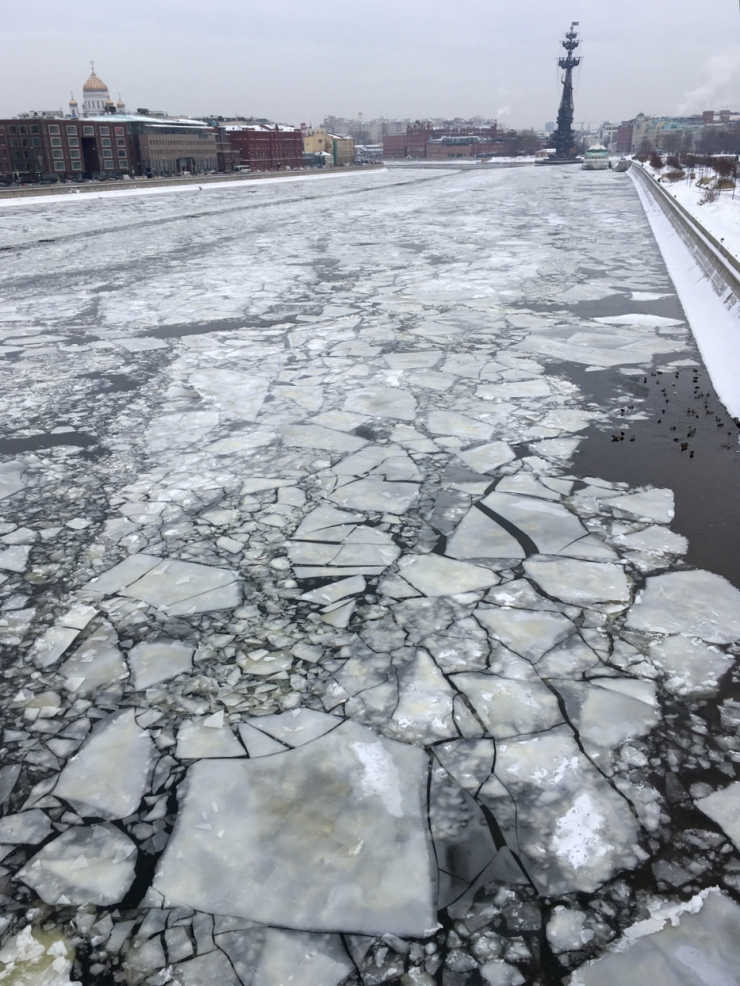 Later in December I was lucky enough to get some time with my friend-of-twenty-years Sasha.  He and I went skating in Gorky Park.  The way he tells it, Gorky Park as a child was much better, because most of the park was available for skating.  You could really get deep into the wooded areas, far away from the big plazas.  But even he admits that now you won’t break your neck, which is probably an improvemt.  The skating area is quite formal, with regular passes by the Zamboni, so the surface is even and not pockmarked or lumpy.  It’s well-lit– lit like a disco, actually– with places to pull off and grab a cup of tea.  Young people are out in force, skating through the night.  The boys showing off, the girls twirling around.  The twinkling lights in the trees along the river put me under their spell; I felt like I was just a little kid again. 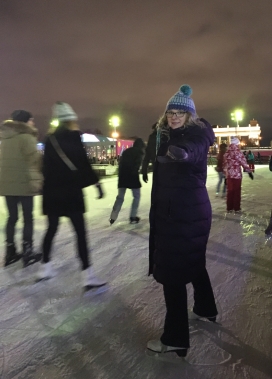 I should mention that Gorky Park has undergone quite a transformation in recent years.  It’s always been a lush public park, but in the 1990s I learned what it meant to have a park without amenities: hard-to-find or non-existent bathrooms meant that people did their business in the trees; lack of trash cans meant that people threw their waste wherever…things like that.  Well that era is gone. For years now, Gorky Park has been nothing but a joy, a glorious oasis of greenery and calm in a city that can kill you with its massiveness.  Sasha explained to me that part of the re-branding of Gorky Park is that it is now a forward-looking park, always hip to the newest trends.  And because it’s not afraid to take risks, this year its New Year’s tree was sideways!

Winter magic is something that Russia, and Moscow in particular, does exceptionally well.  This is a place that loves its winter, and it shows.