I got the call late on Friday night.  Want to go on a trip with us tomorrow?  I paused for a nanosecond, realized I had no plans for the next day, and said, “Yes!  Of Course!”

This is how I joined the Belgorod Traveller’s Club on their excursion to Stary Oskol, another city in Belgorod Oblast.  The Club is organized by the Museum of Folk Culture and every month they go on a different trip.  The group is made up primarily of senior citizens, so twenty or so pensioners and I piled into a bus and hit the road.  At five feet tall, I was among the tallest of the group.

I sat down next to Mr. Yuri Gavrilovich, 80-something years young.  He was born in Ukraine, but his family moved to Russia during the war.  He worked for over fifty years constructing factories.  Yuri Gavrilovich was really up on world affairs and had lots of questions about the United States.  He snapped photos throughout the trip on a camera he kept in a little pouch. 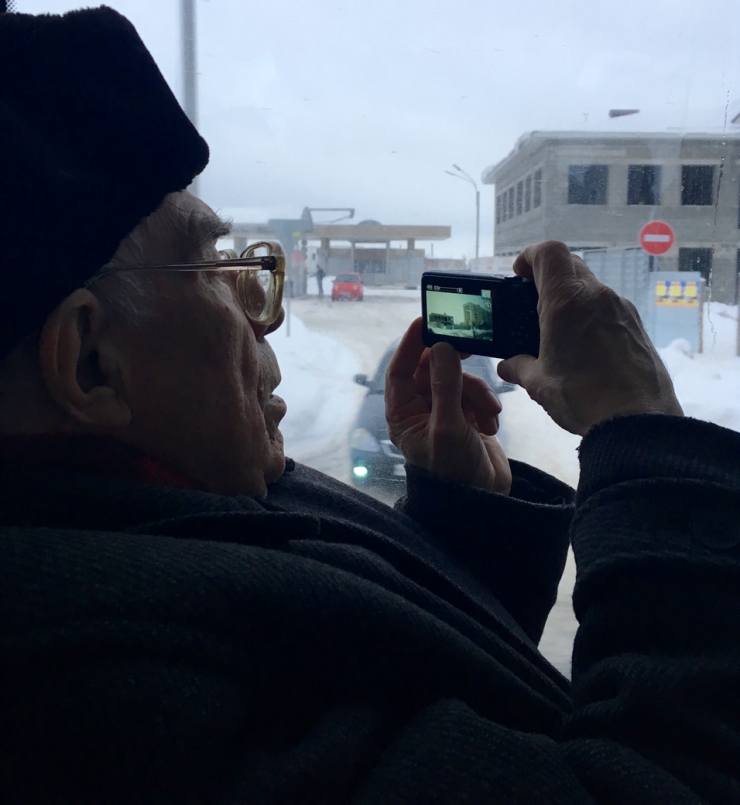 We certainly had ample time to get to know one another because it was a good two hours until our first stop, but it passed quickly.  Along the way members of the club made presentations about various areas of their specializations: geology, history, poetry, etc.  Each person that gave a presentation was given a commemorative book as a memento.

We pulled into a small lane next to an old church and a jolly priest came out to meet us.  This was Father Vladimir.  An actor by training, he killed every stereotype I’ve ever had about gloomy Russian Orthodox priests.  This stone church was build in 1809– it’s unusual to find such an old church in this part of Russia.  Most churches were either destroyed during the Second World War or they were blown up by the Soviets.  This church survived during Soviet times as a grain silo, but the villagers were careful when loading and unloading the grain and the interior was not destroyed. An overly enthusiastic komsomol member once fired a shot at the church, damaging one of the icons, but the villagers believe God took his revenge when the komsomol fell off his horse and scratched his face in the exact same spot the icon was damaged.

We made our way to the center of Gorshechnoe, where we learned that the city’s only elevator is in the hospital.  So that’s where you go if you get a hankering for a ride. WE got to the Regional Lore museum and were immediately impressed with the generous icicles hanging from the roof.

We looked at some old-timey regional costumes and crafts, but I was mostly impressed by my fellow travelers.  Several of the ladies were taking careful notes of all the exhibits, including here, where the sailors who perished in the Kursk submarine are memorialized.

Like every Regional museum, this one featured some tastefully taxidermied animals, most notably this moose.  We were assured that it had been hit by a truck before it was stuffed and installed in the museum.

We had to hurry from the museum to make it to Stary Oskol and lunch.  We ate at the Milano pizzeria, where Yuri Gavrilovich threw a small fit because his salad did not come with bread.  The organizers of the excursion quickly got him some bread and all was well again.  I was lucky enough to sit next to Elena Alexeevna, the organizer of the trip.  She puts in an incredible amount of work every month to pull this together.  I frankly don’t know how she does it because she often doesn’t know until the very last moment exactly how many people there will be.  Hats off, Elena Alexeevna.

Next we visited the educational exhibition center IRON. It’s a joint venture between the iron-ore company Metallinvest and the Moscow Institute of Steel and Alloys.  Apparently, the purpose of the center is to educate schoolchildren in the city about metals, but it is also used for trainings for people in the metal industry.  Our tour guide greeted us next to an anthropomorphized piece of iron ore, saying “Hi!  I am OK! I will tell you all the secrets of metal!”

Honestly, I didn’t learn any secrets of metal because I didn’t understand most of the excursion.  I did come to understand that Stay Oskol sits atop the Kursk Magnetic Anomaly, the largest magnetic anomaly on earth!  I think this just means there is a whole lot of iron ore here.

In one section of the center we were supposed to listen to the iron ore.  I didn’t understand why, but we all dutifully put our ears to the cylinders in the wall.

Then we visited the war memorial and the Stary Oskol Regional Lore museum.

We briefly stopped by the Slavyanska candy store so we could stock up for the ride back.  I bought a cup of tea from the hipsteriest barista I think I’ve ever seen.

On the way back, I was asked to tell a little about myself.  In the spirit of participating like everyone else, I did.  These club participants were so welcoming and kind.  I received several invitations to dinner and even a couple of spontaneous gifts!

These travelers really embody something I have noticed about Belgorod– the active spirit.  It wasn’t just that nearly thirty pensioners participated in a trip– that is interesting in and of itself– but they were such active participants in the trip.  The bus presentations on both the way there and the way back, the active note-taking, the careful listening, the intelligent questions.  Here are people that are curious and interested in their surroundings.  I really admire this quality in Belgoroders and hope I can keep these qualities alive in myself.

Fourteen hours later the bus pulled back into its stop and we said our goodbyes.  My eyes were a little misty when I turned toward home.