So apparently, the term Balaclava (as applied to knitwear) came about during the Crimean War of the 1850s.  Named after the place I went– the small, nearly hidden, Balaklava Bay, which is located on the southern side of Sevastopol. During Soviet times this little bay was omitted from maps because a secret submarine base was hidden into the side of the mountain on the bay.  On the map below, the base is located at the spot with the shield and star.

I think hiding the bay on maps was more to keep out curious citizens rather than foreign spies.  I mean, satellites certainly knew the bay existed.  But the base was perfectly hidden from sea traffic.  Building began in 1953 and lasted eight years; blasting through the mountain took quite some time.  Plus, the facility was fortified against nuclear attack.

There were actually two separate facilities at this base.  One was a maintenance and repair station for subs (called Object 820) and the other was a base where nuclear submarines were armed (Object 825).  The two sides didn’t know about each other, according to our guide.

The entrance and exit to the two facilities were on either side of the hill, camouflaged from spy planes with masking and netting.

After the fall of the Soviet Union, Crimea became the property of the newly-formed government of Ukraine.  After negotiations, Ukraine agreed to transfer all of its nuclear weapons to Russia, so the subs, with their warheads, were sent to Russia in 1993.  After that, the base lay abandoned for a while and looters stripped the interior of much of its metal.  The 1990s were a brutally desperate time throughout the former Soviet Union, so this fact didn’t surprise me at all.  In 2003, the facility was partially restored and converted into a museum.  In 2014, after Crimea once again became Russian, Dmitry Medvedev vowed to continue the museum’s upkeep.  The tour guide told us that portions of the facility stayed closed until 1996, with Ukraine keeping some nuclear missiles there, in violation of the agreement with Russia.  I have no way of knowing if this is true or not.

Somehow I wound up in a tour group that included about fifty children, some of whom were on a school trip from Krasnodar. The rest were local-ish kids (from elsewhere in Crimea) who were out on break for the week.  I tell you this so you’ll understand why most of my photos are populated with ankle-biters. 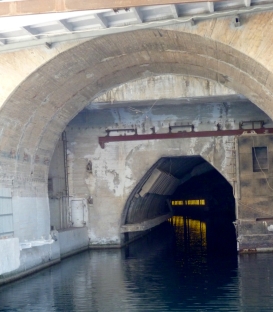 This is the once-camouflaged entrance, where subs would make their way inside, eventually winding up in the dry-dock (pictured below, currently filled with water). 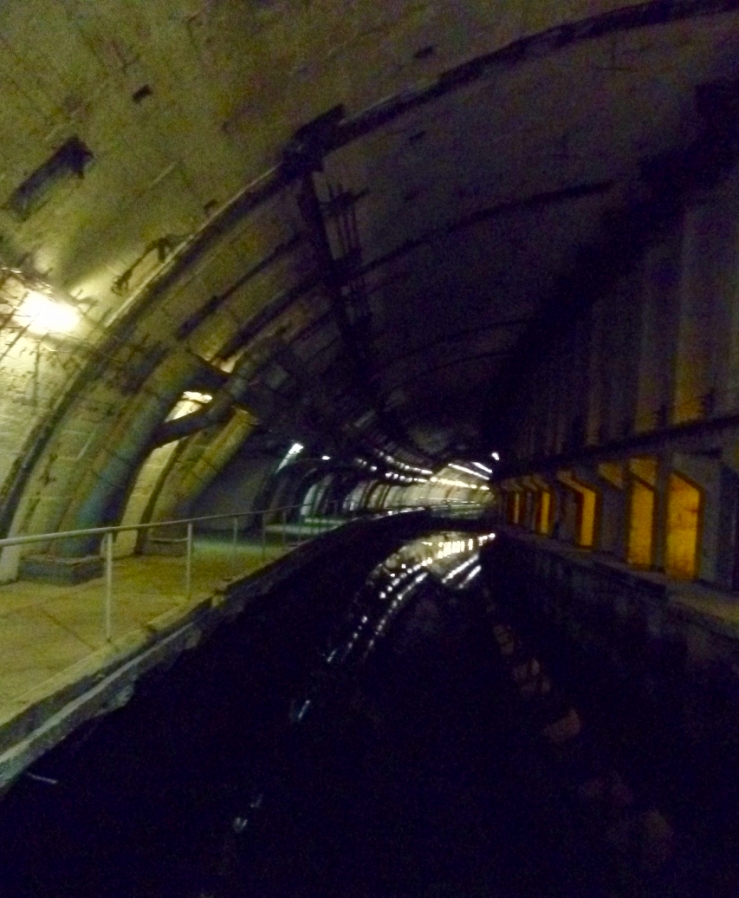 Here the subs would undergo maintenance of various types: painting, refurbishing living quarters, engine repair, etc.  Next to the dry dock was a long blast-proof channel where up to seven submarines could be held, the idea being that these subs could launch retaliatory nuclear strikes.  This, frankly, confused me.  If the whole idea of mutually-assured destruction was that the destruction was indeed mutually-assured, wouldn’t you want these subs to NOT be a secret?  Wouldn’t you want the other side to know very well that you have them?

The passageways through the complex are all curved, in order to help withstand a nuclear blast. 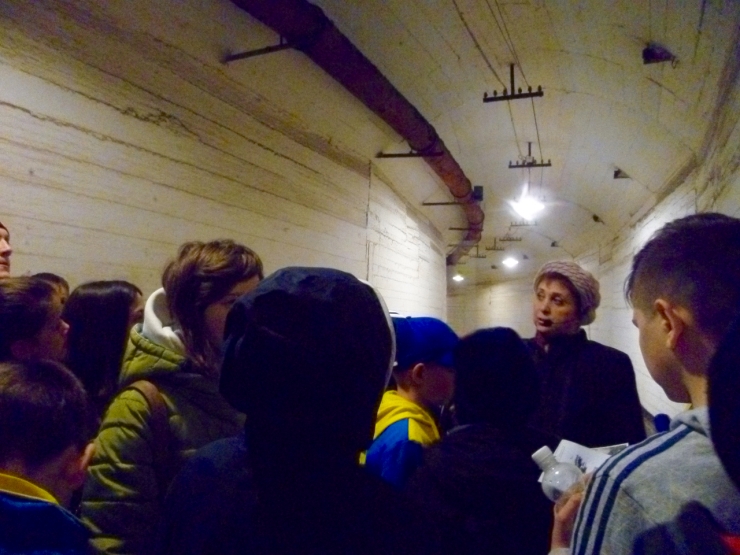 The kids on the tour were seriously excited about this place.  The problem is, they were a little too excited, poking and tugging at one another, whispering, jumping up to see better, etc.  It made it hard to hear the tour guide at times, who, herself seemed frustrated with the enormous group.  I found myself making a hissing noise at one boy who would not stop pulling the pigtails of the girl in front of me.  Yes, I realize I am ridiculous.

For reasons unclear to me, there are some old-school airplanes on display in the tunnels.  Our guide nervously told the kids she didn’t think they were allowed to climb on it, which had exactly zero effect.

We visited the locations where the nuclear missiles were stored and armed.

Towards the end of the tour we came upon an exhibit dedicated to the nuclear bombs dropped on Hiroshima and Nagasaki. 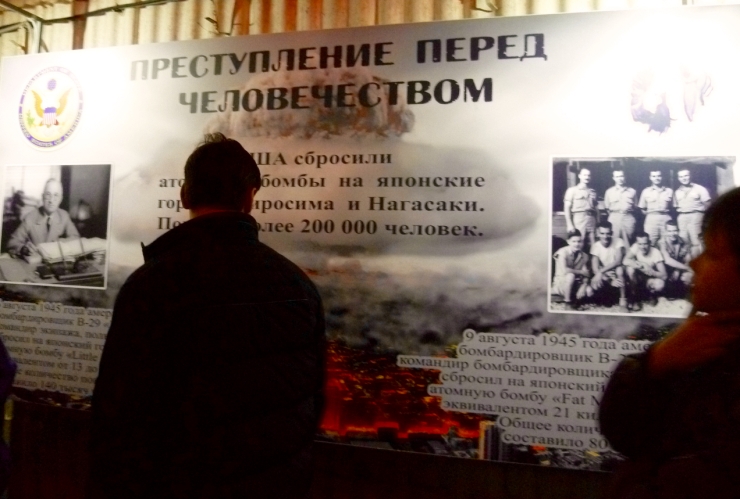 The poster says, “Crime against humanity.”  Anti-war peacenik that I am, I find this exhibit entirely appropriate.  Notably, there is no such exhibit at the Titan Missile Museum in Arizona, another Cold War nuclear relic.  I guess that’s because we, the Americans, are the ones that started this whole nuclear horror to begin with.

As far as I can tell, this appear to be true.  A wikipedia article links to the following academic paper detailing the early nuclear plans of the Cold War. This particular exhibit goes on to credit the Soviet Union’s nuclear capability as the key to global peace; after all, without a counter-weight, the US could easily drop bombs without fear of retaliation.  Interestingly, the tour of the Titan Missile Museum in Arizona also hails mutually-assured destruction as keeping the peace lo these many years, but fails to credit the Soviet nuclear capability as the necessary party to “mutual.”  In other words, this exhibit explicitly blames the United States for both beginning the nuclear arms race and threatening the world with a nuclear monopoly.  I’m hard-pressed to argue the case against this fact.

You know what other surprising thing I learned at Balaklava?  I learned that there is such a thing as attack dolphins.  They were trained and housed near Sevastopol.  Apparently they passed from Soviet hands to Ukrainian hands in the 1990s, but are now in Russian hands.  (Except for a few that may have escaped out into the Black Sea?) This exhibit showed what the attack dolphins did in the 1960s-1970s.

So dolphins are used to search for mines and even people underwater, that makes sense.  But this exhibit explicitly claimed that the dolphins are trained to attack, or “neutralize spies.”

However, this article from the Russian Popular Mechanics claims that, although the dolphins were outfitted with knives and pistols on their heads (!!!!), they were never trained to kill.  I just don’t know what more to say about this, folks.  I’m stunned into silence.