Even though Simferopol is the capital of Crimea, Sevastopol is where all the action is.  The Black Sea Fleet is here, so important to Russian defense that Sevastopol is a federally-administered city, meaning that the federal government is directly in charge instead of Simferopol.  In the sixth century B.C.E., the Greeks had a colony near here and you can still visit the ruins.  Then the area was settled by various other ancients, like the Golden Horde, but it was such a long time ago and so confusing that I can’t keep it straight.

The history that I can remember starts in 1783, when Catherine the Great annexed Crimea and founded the city.  There is a triumphal arch commemorating the 200th anniversary of its founding. 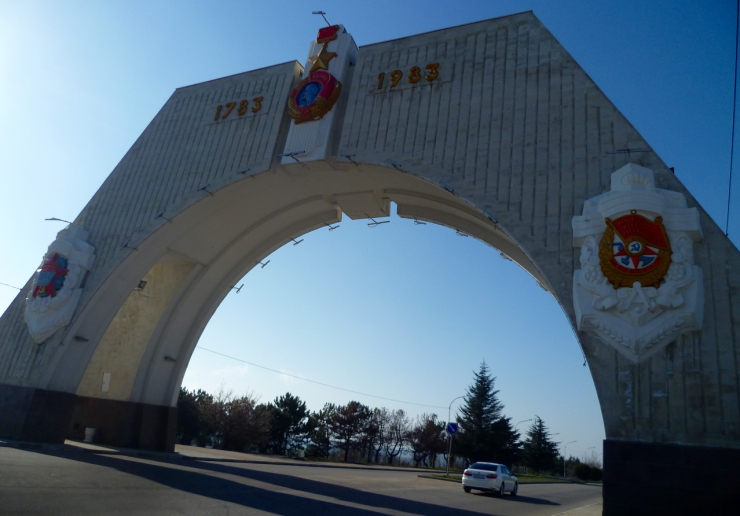 According to my guide, who I’ll continue to refer to as Svetlana, there were major arguments over monuments to Catherine the Great when Ukraine was in charge of Crimea.  This 2009 article from the Washington Times confirms her story: a monument was erected in 2008 in Sevastopol but it was immediately defaced with yellow and blue paint, the colors of the Ukrainian flag.  After the vandalism, groups of pro-Russians sympathizers held watch over the monument to prevent further vandalism.  The article itself is a fascinating relic; at that time, the US media was referring to Crimea’s status as Ukrainian as a “quirk.” It also points out how Crimeans frequently saw Ukraine’s policies toward Crimea as harsh– for example, for many years Ukrainian was the sole official language of Ukraine, even though most people in Sevastopol don’t speak Ukrainian.  This 2006 article notes how Crimeans tried to make Russian an official language of Crimea, but failed.  This issue of Russia vs. Ukraine in Crimea was a running theme all throughout my stay in Sevastopol.

But anyway, Catherine the Great wanted Crimea so she could have a warm-water port for sea defense.  Hence the Black Sea Fleet, founded by Prince Potemkin, once of Catherine’s gentleman-friends.  Home as it is to the Fleet, I expected to see lots of sailors wandering around, but, alas, I only spied the occasional naval officer.  While Crimea was Ukrainian, the presence of Russia’s Fleet caused many disputes, as you can imagine.  Under Ukrainian law, the Fleet was supposed to leave Crimea in 2017.  Svetlana told me that NATO was planning to set up a base in Sevastopol after Russia’s exit. She even pointed out a building that she said was to be NATO’s headquarters.  I don’t know if this is true or not.  Because her husband was former military, she often claimed to have inside knowledge that I could not at all confirm.

Svetlana says that several ships in this harbor belong to the Ukrainian navy or Ukrainian commercial interests.  She just waved her hand generally, so I have no idea which particular ships she was referring to. She says that the ships remain here because the Ukrainians refuse to come get them, not because they are being held by Russian authorities.  I can see where it would be difficult for Ukrainians to come claim the ships because, in order to do so, they would effectively have to recognize the area as Russian and submit to Russian immigration authorities.  This issue of “abandoned” or “seized” property is present all over Crimea, from ships to fallow fields.  I wonder how they are going to resolve these disputes.  It’s so wasteful to leave ships to rust and fields to lie dormant.

But aside from these concerns, walking along the promenade in Sevastopol is pure joy.  The waters of the Black Sea are so blue here.  Kids roller skate and chase pigeons while cover bands play Russian hits from the 1990s.  I got some ice cream and just walked up and down.  The ice cream, by the way, was from Belgorod (hometown pride!)

This is the Monument to Sunken Ships.  It memorializes an incident that took place during the Crimean War in 1854 [brief history aside:  The Crimean War ran from 1853-1856, when Russia battled England, France, Turkey, and Sardinia (whatever Sardinia was).  Russia lost, but for various reasons, the main country to suffer was Austria.  The war became known for its brutality and overall pointlessness, as Tennyson pointed out in The Charge of the Light Brigade. ].  The Allied forces (England, et al.) were preparing to attack Sevastopol and the Russian Navy knew it was not strong enough to hold off the attack.  So the Navy sank its own ships to create a barricade along the bay, preventing the enemy ships from entering.  When the Allied forces tried to blast their way through the blockade, they got caught up in a storm and crashed.  As with the rest of the Crimean War, the attack on Sevastopol was a logistical and military disaster for everyone involved.

This war became known as the First Defense of Sevastopol.  The Second Defense of Sevastopol took place during the Second World War.  Like everything having to do with that war, the Nazi invasion of 1941 was brutal.  Unable to take the city outright, the Nazis encircled Sevastopol in a siege, but then the Soviets attacked the Nazis at the Kerch Strait to the east, causing the Nazis to have to divert their attention from Sevastopol. The Nazis took another shot at Sevastopol in 1942 and bombed it all to hell. The fact that it took the Nazis so long to take Sevastopol had consequences for the rest of the war– while Nazi forces were occupied in Sevastopol, they were not available to help out in Stalingrad, which became the turning point in the war.  The battle was devastating for everyone, Soviets and Germans alike. Three out of Svetlana’s four grandparents were killed during the siege.

To commemorate the battle, the city has several important war memorials, including this one: 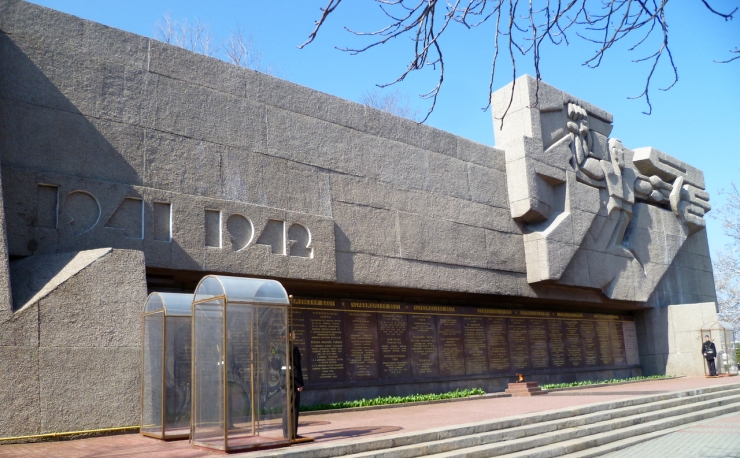 The changing of the guard here is particularly impressive because it is done by high school students.  Svetlana herself took part when she was a teenager.  Girls and boys alike do the march, which Svetlana says it much more difficult than it looks.

There is also an alley of monuments to all the hero-cities.  Hero cities are cities where the population itself, not just the military, was heavily involved in defense against the Nazis.  Svetlana doesn’t think all the cities on the list are really deserving of the title.  She thinks that really only Leningrad, Sevastopol, Stalingrad, and Odessa.  In this sense, she is a traditionalist.  These are the four cities that were originally awarded the title by Stalin in 1945.  Only later were the additional cities added to the list.  Svetlana is particularly incensed that Kiev was named a hero-city since over 600,000 Soviet soldiers were taken captive there, as opposed to continuing to fight to the last man.  You see how this Ukrainian-Russian conflict has reopened interpretations of history and picks at old wounds?  The practice of calling a city a “hero city” was stopped in 1988.  Then in 2005 the Russian government started designating cities as “Cities of Military Glory.”  Belgorod is one.  I’m not sure I understand the need to continue to recognize cities for their valor.

After the war, the city was devastated.  Hardly any buildings were left at all and the few remaining survivors were living in tents.  The reconstruction of Sevastopol was truly a monumental feat, commemorated by this odd monument: 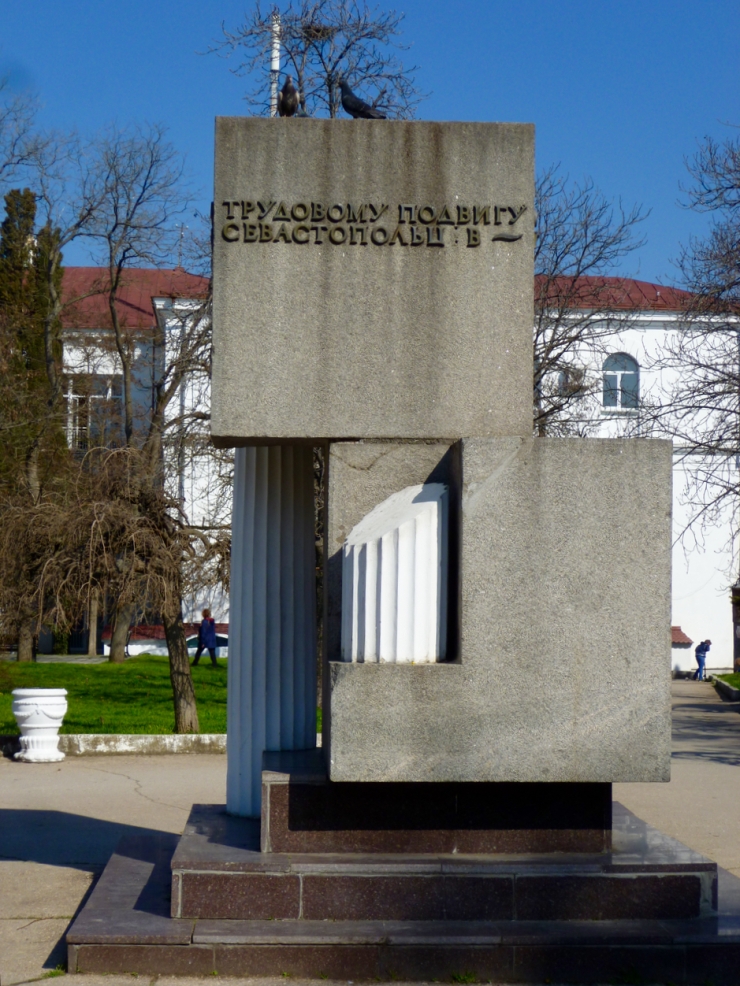 Another monument commemorating recovery work in Sevastopol is this monument to the Komsomol, the Soviet youth organization.  Ivan, Svetlana’s husband, told me that Ukrainians tried to break off the tip of the rifle on this statue, but, since it is made of plexiglass covered in bronze, they were unable to do so:

Along the waterfront, there is a little pictorial commemoration of the so-called “Third Defense of Sevastopol,” which took place during the “Crimean Spring” of 2014, when Crimea returned to Russian hands.  In this first photo, you see people marching with the banner called “Blockpost Sevastopol.” As far as I can tell, this is a civilian-organized “self-defense” organization that was formed to protect Sevastopol in the event it was attacked by the Ukrainian military in 2014.  They still have a group on Vkontakte (Russian facebook), where you can see them asking Russian forces for help in 2014.  Who knows if they received any help.  Since the Ukrainian military never attacked, no real help seems to have been needed.  Svetlana describes 2014 as a mixture of extreme fear followed by elation.  She and her husband were terrified that Ukraine would attack and that there would be war.  After the crisis passed without casualties and Crimea became part of Russia, she said her spirit soared.  She says she is still living on the high of that moment.

This photo in the commemoration is of Russia’s “little green men” or “polite people,” that is, the Russian forces that re-took Crimea.  It’s unusual to see photos of them, even though there are magnets and t-shirts thanking the “polite people” all over Sevastopol. 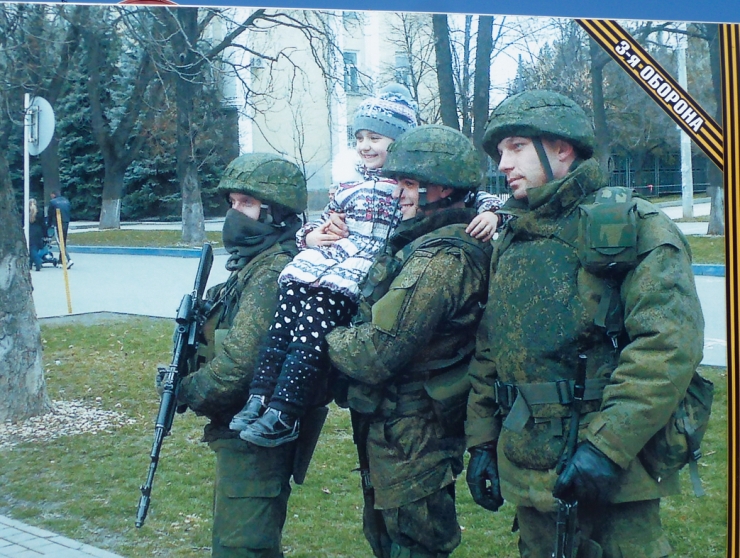 Return to Russia is a popular theme among t-shirt sellers.  This one, with a picture of Khrushchev and Putin, says, “He gave it up and he took it back.” 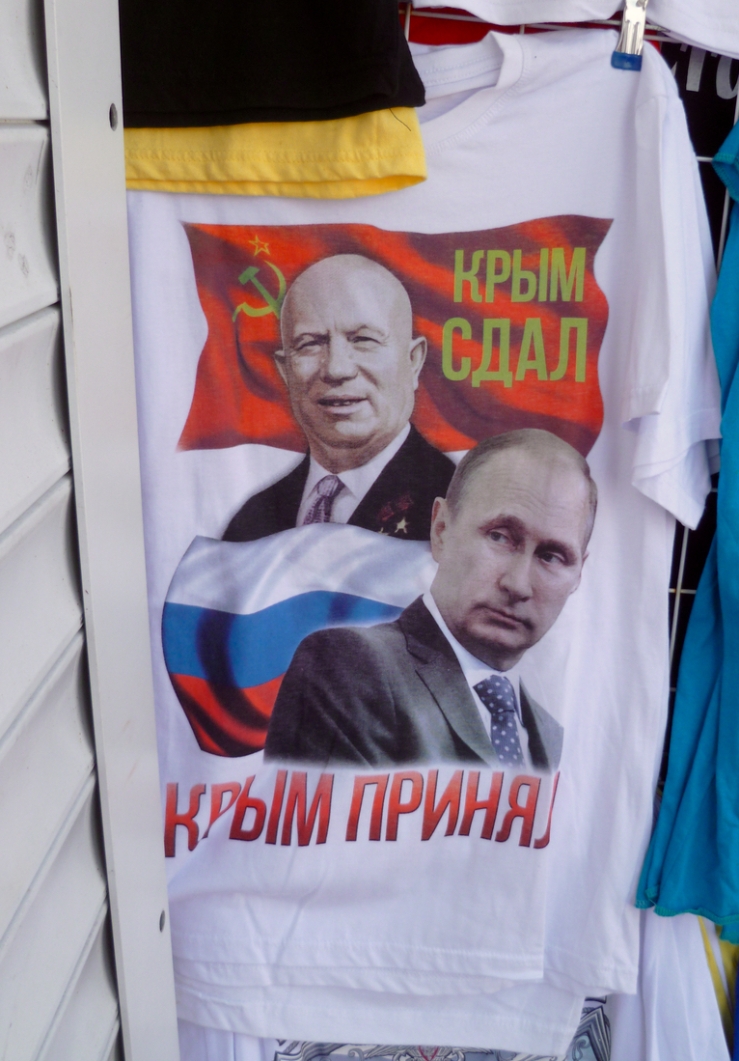 That vacation-y feel definitely increased when I toured Yalta and the southern Crimean coast.  Stay tuned!