It’s snowing here today in Belgorod, so I’m especially wistful looking back at my time in and around Yalta.

Yalta is the biggest city on the Southern Coast of Crimea (known as UBK to the locals), but the entire shoreline is dotted with resorts and sanatoria.  During Soviet times, factories had their own sanatoria here and workers would be given trips to the sanatorium for vacation.  Some of these have been refurbished into quasi-modern resorts, but, sadly, some of them were just abandoned.  Soviet leaders also had their own vacation houses here, and various ministries owned resorts for their employees.  After the fall of the Soviet Union, all of this became the property of the Ukrainian government.  Some of these properties went into private hands, but many remained state properties.  After the 2014 changeover from Ukraine to Russia, the Russian government took possession of these properties, and is reportedly hard at work restoring some of them to be used as tourist attractions.

Gorbachev’s vacation house is here, the one where he was arrested during the 1991 coup attempt.  The house is currently being re-built into a physical fitness complex.  Svetlana, my guide, said she knew people that had worked on the original construction of Gorbachev’s house and they complained bitterly about his wife, Raisa’s, unreasonable demands (tile had to be replaced three times, etc.).  Svetlana went on to say that her husband’s friends, former military, told him that Gorbachev had in fact engineered his own kidnapping to Crimea in order to gain public support, but that Yeltsin had tricked him while he was away.  This doesn’t sound like any version of the story I have ever heard, but who am I to say?

Gorbachev’s house is not visible from the road– of course, security did not permit that.  But we stopped nearby in the town of Foros and checked out the view. 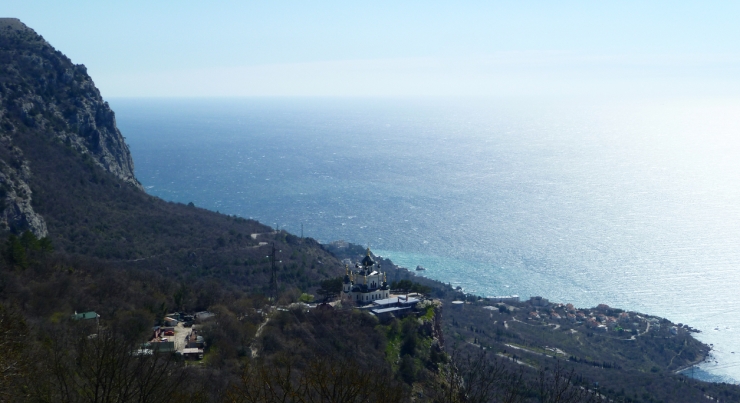 We made our way down to coast to Alupka, home of the Vorontsov Palace, one of the strangest palaces I have ever visited.  It was built by Prince Vorontsov, who was totally in love with England.  His father had been ambassador to England, so he had lived in London until he was a teenager.  So the front part of the palace looks like a castle in England.  It was even designed by the architect who completed the drawings for Buckingham Palace.  It looks extremely, drastically, un-Russian.

But then you walk around to the back of the palace, and what do you see?  An Islamic-style arch.

After the revolution, the palace was nationalized, and turned into a both a museum and a spa. Most of the artifacts were evacuated during the war, but the Nazis still wound up stealing a huge number of paintings, furniture, and books.

In 1945, as part of the Yalta conference ending World War II, Winston Churchill lived here.  He is said to have really loved the English feel of the place.  It has lovely views, as does pretty much every place in Crimea.

Outside the palace was this awesome bus stop. 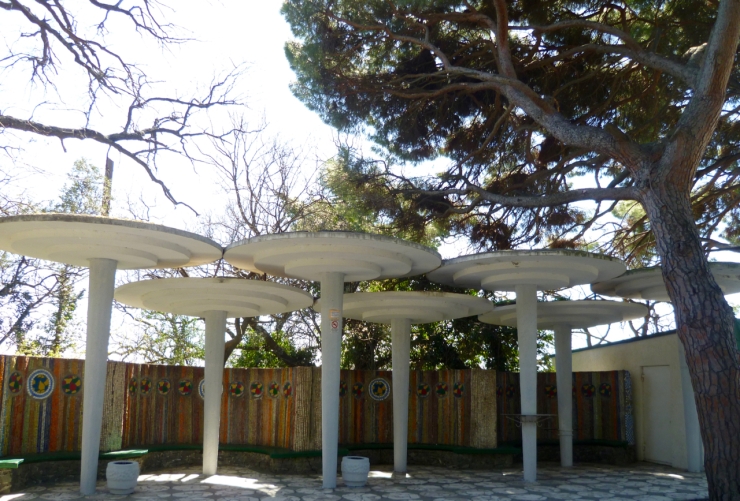 I don’t know if you can see, but those are little mosaic tiles decorating the backs of the seats.

We continued our drive along the shore and Svetlana pointed out a neighborhood that she says is known as “Crimean Beverly Hills.”

Not too shabby.  Next we saw the Sparrow’s Nest, a tiny palace perched on an overhang. 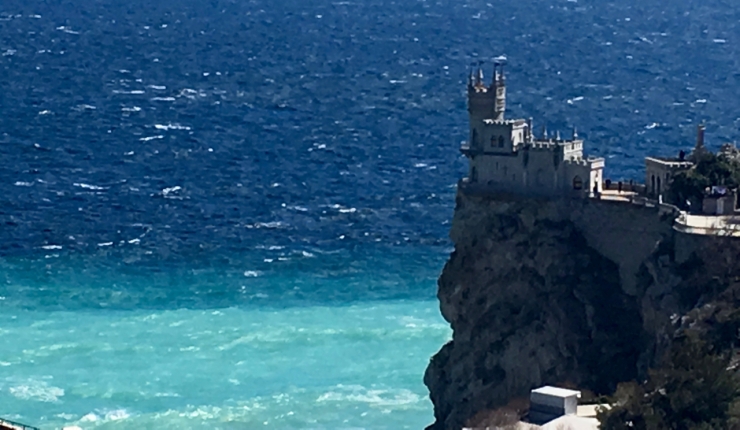 Farther along the coast is the Livadia Palace.  There has been a palace on these grounds for hundreds of years, but this most recent iteration was constructed by Nicholas II not long before the Revolution.  In fact, part of the royal family hid out here for a while before being rescued by the British royal family. 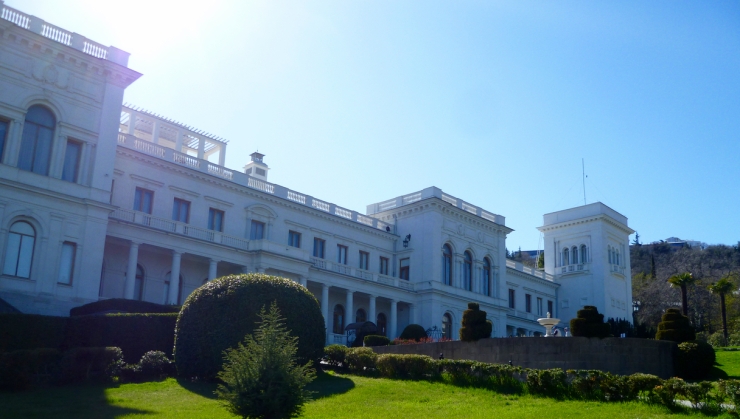 The palace was occupied by Germans in both the first and second World Wars, so the majority of the royal possessions were stolen.

But apparently these are some of the Romanov’s hunting trophies from that period.  No clue as to whether they are really the Romanov’s.  Does it really matter?

The palace is most famous to Westerners are the location of the 1945 Yalta conference, where Churchill, Roosevelt, and Stalin worked out the details of the end of World War II.  This is where they conferenced: 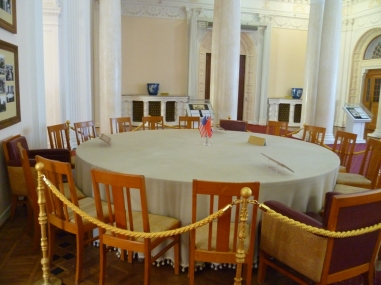 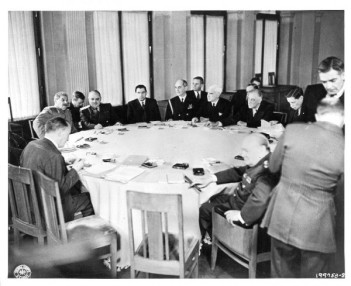 And that famous photo of the three of them on the terrace?  It was taken here:

Roosevelt lived in the palace during the conference since he had such difficulty getting around.  The views, as always, are spectacular. 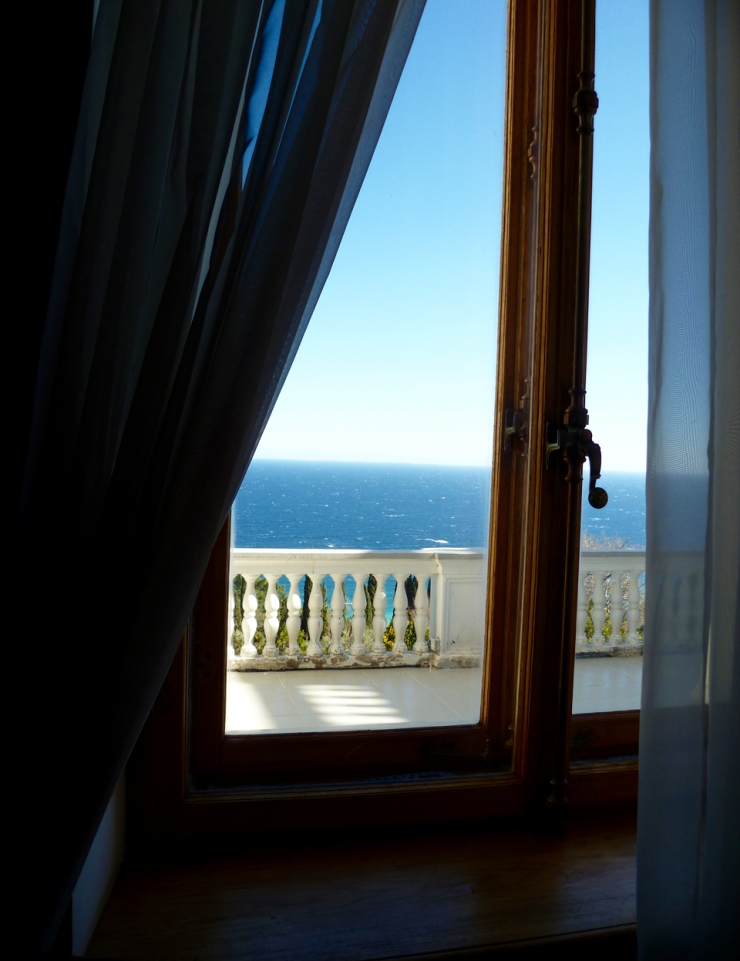 Continuing along the southern highway, we arrived in Yalta.  Yalta is basically a fancy beach town.  There is the equivalent of Beverly Hills’ Rodeo Drive right along the beach.

The day I was there it was windy and chilly, but I was so excited by the surf that I nearly got soaked by a wave.

On the whole, Crimea kind of reminded me of California.  What with the beaches and the mountains, it’s a little bit like Los Angeles before the massive influx of humanity ruined it.  There are still plenty of unspoiled areas of Crimea, but the abandoned Soviet sanatoria are a real problem.  It’s clear that Ukraine either didn’t have the resources to do this or chose not to, but perhaps some savvy Russian investors will come snap up these properties.  I only hope they don’t build the sort of monstrous complexes that have sprung up elsewhere in Crimea, like the Mriya Resort and Spa, which, although apparently popular, is achingly tacky.  One of Svetlana’s sons has stayed there, though, and he liked it.  It apparently has an elevator to the beach!