Wait, Tbilisi isn’t in Russia!  Yeah, I know.  But, look.  Last week in Belgorod we had weather that looked like this.

So it’s only fair for me to venture out a little farther from home, no?  I landed in Tbilisi and the amazing Lena had sent a driver for me.  I never got his name, but he told me his life story after handing me a bottle of the famous Georgian mineral water, Borjomi.  He was born in Abkhazia, but had to flee in the early 90s when the area became a subject of armed conflict between Russia and Georgia, when over 200,000 ethnic Georgians were expelled from the area.  He said he had the opportunity to maybe flee to another country altogether, but, at the time, he hoped to be able to someday return.  He came to Tbilisi and has been here ever since, working odd jobs, which now includes driving tourists around.  He said unemployment is a huge problem in Georgia and bitterly told me that the construction workers we saw near the airport were Turkish, brought in by wealthy businessmen to work for even lower wages.  He was pretty angry at Russia, which is understandable considering his experience in Abkhazia.  He was also very supportive of recent president Mikheil Saakashvili, a controversial figure under indictment in Georgia who until recently was the governor of the Odessa region in Ukraine.  Saakashvili– a figure so odd he gets his own paragraph later, don’t worry.  Anyhow, my driver liked Saakashvili’s emphasis on law and order, saying that now people are too afraid to steal because you can no longer bribe your way out of criminal charges.

He helped me get a SIM card and the process was remarkably fast– took about 5 minutes– even though it was conducted in three languages: English, Russian, and Georgian. Then he took me on a little tour of downtown before passing me into the hands of Lado, the owner of my hotel.  On hearing my profession, Lado immediately launched into a polemic about how immigration is ruining both Europe and the United States.  Before I could even think about how to respond, he invited me to agree with him that all terrorism was committed by Muslims.  Rather than get into a complicated discussion of the definitions of terrorism, I tried to gently change topics, asking him if there were a lot of Muslims in Georgia.  Yes, he said, and they are from all over; from the Middle East, Azerbaidjan, Iran, etc. And it’s true– I have seen quite a few women in headscarves and niqabs on the streets here, but they are clearly tourists like me.

Tbilisi has an old town and then the modern part.  The old town is a maze of narrow cobblestone streets, where somehow cars squeeze through.  Sometimes drivers get out of their cars to negotiate who goes where.  There are cafés and wine bars/cellars everywhere and every few feet someone is selling fresh-squeezed orange and pomegranate juice.  Most of the tourists are speaking Russian, but I hear American English every now and then.

My hotel is in the part of the old town called Abanotubani, known for its sulfur baths.  You can see the domes all over, with ventilation vents at the top, but the area doesn’t smell like sulfur at all. 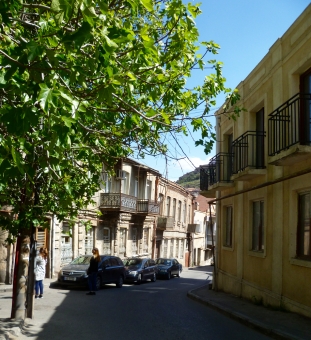 As for modern Tbilisi, well, part of it is ultra modern, and by that I mean that it has weird architecture.  This is all Saakashvili’s doing.  So a little bit about Misha, as he’s known here.  He’s Georgian, but he completed part of his education in Ukraine and part of it in the United States.  He took power in 2003 after the Rose Revolution, a bloodless coup that marked Georgia’s shift to decidedly pro-Western policies (as opposed to pro-Russian).  Saakashvili proceeded to tackle corruption and was apparently by all accounts extremely successful, but he got a little lost when it came to Georgia’s major economic problems.  Plus he was a bit of an authoritarian and probably provoked the 2008 war with Russia.  He left power in 2012 and moved to the United States, settling in hipster Williamsburg, Brooklyn, for a while. Then he got involved in politics in Ukraine, renounced his Georgian citizenship and took Ukrainian citizenship.  In Georgia he is wanted on several criminal charges alleging abuse of power.

When he first became president, one of Saakashvili’s main concerns was infrastructure, so he set about renovating old buildings and constructing new ones.  And he had a decidedly contemporary taste.  Exhibit number 1, the Peace Bridge:

It glows at night, I’m told, but I haven’t made it out there yet in the dark.  Then there’s this, which I guess we’ll just call Exhibit Number 2: 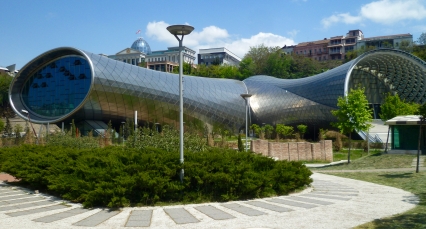 This building is part of the presidential administration complex:

This mushroomy building is called the multi-service center, where you go to get all your paperwork done.  My driver said that you can get anything you need there, driver’s license, marriage license, property deed, tax documents, etc., in under half an hour.  AND he says the staff are friendly.

You can see more examples of Misha’s modern architecture here.  I tell ya, that guy knows a thing or two about branding. 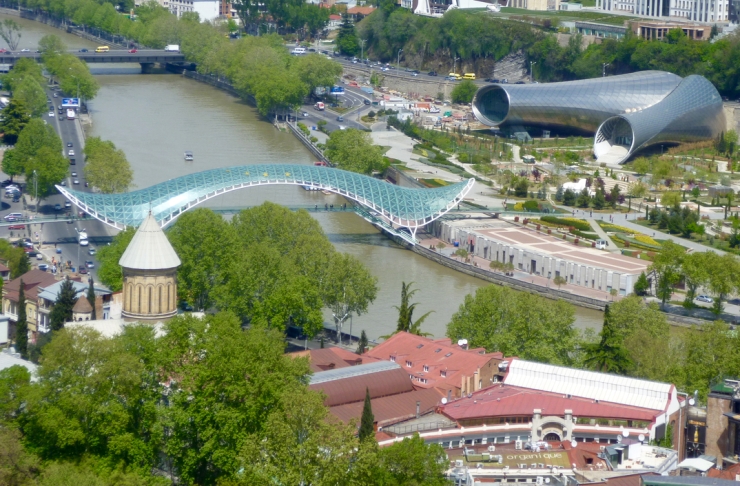 In the evening I decided to try out the sulfur baths. I rented a little private room with a shower and a tub of sulfur water.  The water wasn’t extremely hot, but after sitting in it for about half an hour I was ready to get out.  I smelled a little boiled-eggy. A woman then came in and scrubbed me down.  It was kind of gross, honestly.  I don’t mean she was gross, I mean I was gross.  I had no idea I was carrying around so much dead skin. Afterwards I walked back across the street to my hotel and collapsed in sulfury slumber. 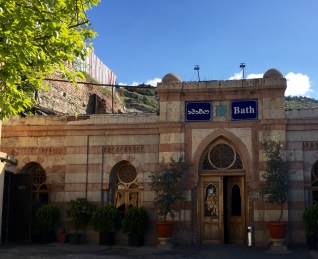