“I am in love with Georgia,” I said to Lena, my tour operator.  “Tbilisi isn’t Georgia,” she said.  “You have to get out of the city.”  So she set me up with her guide, Anton, and some other tourist stragglers, a transplant from Rostov-on-Don to Tel Aviv and her 9-year-old son.

Thanks again to Saakashvili, Tbilisi has a smooth, modern highway that leads to the west.  We sped off on this route while Anton pointed out some points of interest along the way.  For example, he gestured toward a tall, 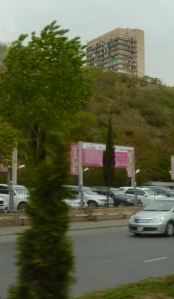 Soviet-era tower and said that this is where refugees from the Abkhaz war in the early 90s had been settled.  He said that it was extremely hard on the Abkhazians because they had been accustomed to rural houses and now here they were crowded into dormitories.  Later he pointed out some recently-constructed low-lying houses where those displaced from the 2008 South Ossetian war live, but I wasn’t fast enough on the camera to catch them.  The South Ossetian war came up again when we stopped for snacks near Gori, Stalin’s birthplace.  In 2008, Russian forces got as far as Gori.  I knew this but it wasn’t until we actually got to Gori that I realized how close Gori is to Tbilisi, the capital.  I can’t imagine how scary that must have been, with Russian forces within a stone’s throw of the capital.  But you wouldn’t know any of this from the 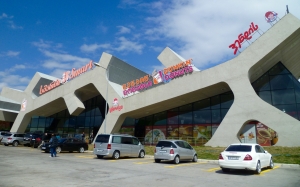 highway, which shows a different peculiarity, Saakashvili-styled rest stops.  They were supposed to be built throughout the country, but when Saakashvili was pushed from power, construction stopped.  So there are only two, here in Gori, across the road from one another.  They feature something which I saw *everywhere* in Tbilisi:  the combination Dunkin’ Donuts-Wendy’s. Seems like Das Racist needs to write a new song, specifically for Tbilisi.

A little bit later we got to Borjomi, home to the springs of the famous mineral water.  If you’ve ever been to this part of the world, you’ve no doubt tasted the fizzy, mineral-y drink.

Russians were sad when fraught relations with Georgia led to a seven-year ban on importing the water.  It was a weird time– I was able to get it in Tucson, Arizona, of all places, but I couldn’t get it in Moscow.  In 2013 the ban was lifted and now everyone is back to enjoying the water.  It first became famous in the early 1800s, after the Russian Empire had swallowed up Georgia, when the Russian aristocracy started enjoying the water, touting its health benefits.  Mikhail Vorontsov (remember him?) spent a lot of time in the town, built himself a house here, installed several parks, and otherwise made it a chic place to be.  The Romanovs even built themselves a palace, which is currently under restoration so not available for public visits.  Mikhail Romanov built the first bottling factory here in the 1890s.

After the Soviets invaded in 1921, all the palaces and fancy homes were turned into sanatoria for workers.  After the collapse of the Soviet Union, things were grim in Borjomi, despite the popular water.  Most of the sanatoria settled into disrepair and some were used to house people displaced from the Abkhazia and South Ossetian wars.  One of the few remaining sanatoria (which is now a spa) is called the Firuza, built by Iran’s consul and decorated with rock crystal. 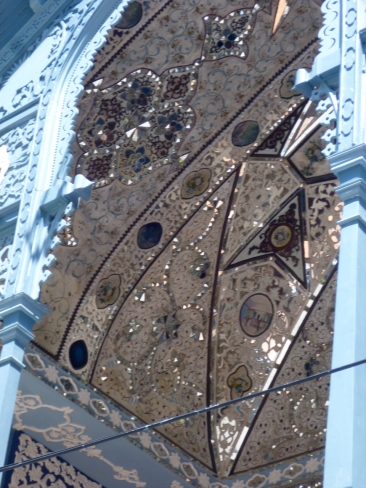 We went to the first spring and a woman handed us up a taste of the famous water.  The first spring is now in this fancy blue canopy (also thanks to Saakashvili) and a nearby cable car will take you up the mountain if that’s your thing.

My traveling companion’s son begged for a ride, so off we went.  The views were amazing, but the most interesting thing was the ride itself, where we were joined by a young Muslim family of indeterminate origin.  The woman wore a full niqab.  The ancient cable car man said “Shalom” to the 9-year-old in our group and then bent over to play with the Muslim baby, saying “Salaam.” We all basked in this warm multi-confessional peace until a giant stream of snot ran out of the old man’s nose and onto the slick floor of the cable car.  Trapped as we were, we all silently shifted our positions to remain out of range of the old man’s leaky nose.  We gave each other knowing looks as we scampered out of the car.  What history and politics has divided, fear of gross bodily fluids had brought together.

Anton led us farther west from Borjomi into the nearby national park to show us some ancient ruins called the Gogichaant Gele monoliths.  This is a collection of buildings discovered in 1972 which have yet to be thoroughly excavated.  Archeologists have determined that some of the buildings date from early Christianity (so they are about 2,000 years old), but some of them may be even older.  They are just out in the open, not far from the main road.  It’s a shame that the entire area hasn’t been excavated and protected, but it seems that Georgia is covered in so many ancient ruins that it’s just a case of priorities.  As you come upon the stones, at first you think, “This is just some rocks.”  But then you realize, hey, they had to have been placed that way by a human, and then you come upon some full-scale buildings.  One of the buildings contained a huge domed space with an opening at the top.

We kept going west until we made it almost to the Turkish border, stopping at the Rabat castle.  It was built in the 9th Century by early Georgians.  It was attacked by the Mongols and eventually came under the control of the Ottoman empire.  A mosque was built in the 18th century but the area continued to host an Orthodox church as well.  When the Russian Empire took over Georgia, this was one of the last areas to be taken.  Resistance was fierce and the area became Russian only in the late 1820s. Saakashvili restored much of the castle and built modern hotels and tourist facilities on the grounds. 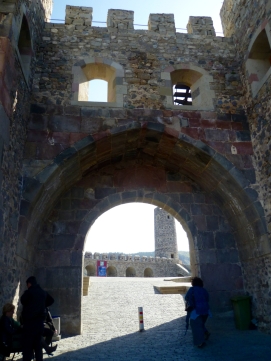 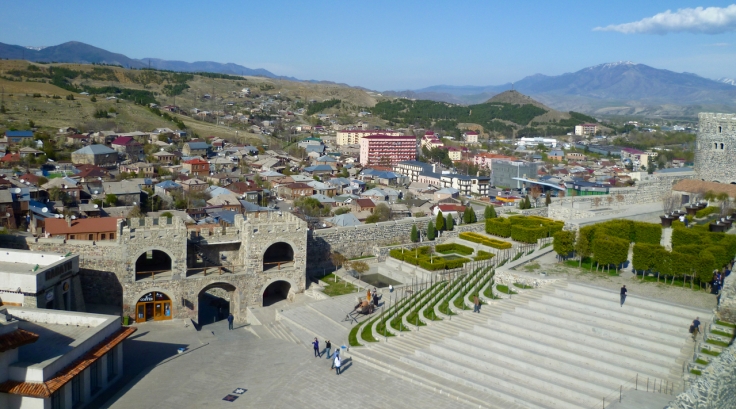 The day ended with a visit to the Sapara Monastery, which dates from the 9th or 10th century, but humans have taken their toll.  Reconstructions and additions took place over several centuries, so there is a mixture of building techniques and styles.  Apparently once completely covered in frescoes, many of the interior paintings were plastered over in the 19th century.  During Soviet times the monastery was apparently used as a piano summer camp.  Some of the reliefs from the interior of the main church, St. Saba’s, have been removed to various museums.  But it was gorgeous to visit near sunset.  It’s really tucked away from the world and only recently has a new road been built to allow easier access.  It’s a working monastery– two monks arrived in a big SUV while we were there.

We got back to Tbilisi well after 11 o’clock that night, but I had to get myself ready for the next day, when we would travel to Kakheti, Georgia’s primary wine growing region.