I could take you through every church and town I visited in Georgia, but I fear you would get bored.  I wasn’t bored because I was high on wine, Georgian food, and sunshine, but I have a feeling very few people really want an in-depth lesson on the architecture of 5th Century churches.  So let me just cover some over-arching themes here.

The population of all of Georgia is less than the population of Moscow.  Plus, you can drive all the way from one end of the country to the other in less than a day.  It really only has one big city, Tbilisi, which has about a million and a half people.  Nevertheless, this country has maintained its own quite distinct language and culture since the 1st Century.  Their Christianity is said to have come directly from the Apostle Andrew, who preached in the area. So what this means is that there is an awful lot of really, really old ruins in a very small geographic area.

Like I said, there’s just one big city.  Everything else aren’t even cities so much as towns, so life in Tbilisi is obviously different from the rest of Georgia.  Additionally, life in Tbilisi isn’t that much different from any other post-Soviet city.  I spent one night there in a homestay situation and my host’s apartment looked every bit like a typical apartment from Moscow, or Petersburg, or Irkutsk, or Ufa.  It was your standard two-room apartment in a paneled, block-style building. 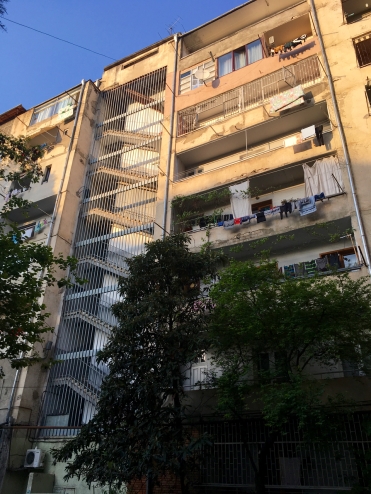 The products available were the same as those in Moscow, with the addition of items currently under sanction (like European cheeses).

So grocery shopping is totally normal.  The streets in Tbilisi are fairly good (I was told multiple times that this was thanks to Saakashvili), except in the Old Town, where they are cobblestone.  But cobblestone is cobblestone– nothing to be done there if you want to keep your historic look.  Public transportation is just like it is elsewhere in the post-Soviet world, with the super-efficient metro supplemented with various buses and mini-buses.  The metro looks basically like any other post-Soviet metro. 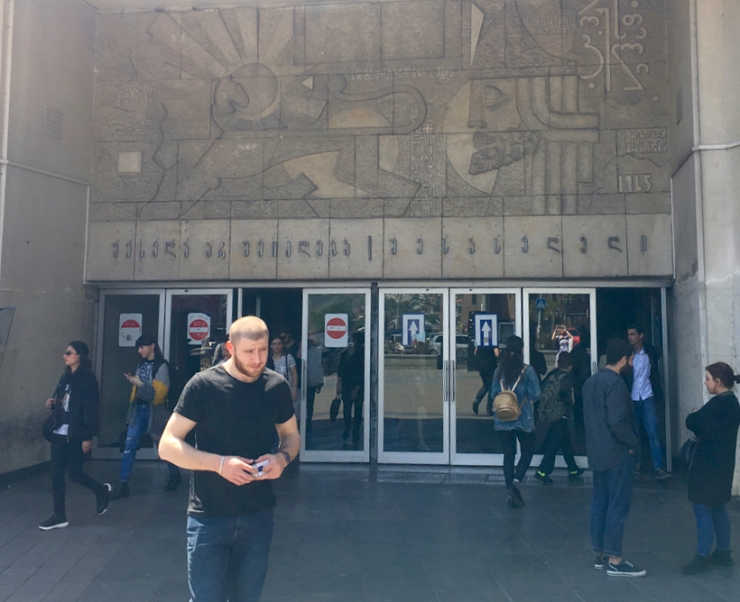 The main street in Tbilisi, Rustaveli, is wide and busy and gorgeous.  It is lined with ritzy stores, government buildings, and theaters. 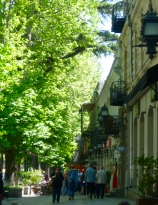 There is a monument outside the main government building dedicated to the twenty-one people who were killed by the Soviet Army on April 9, 1989.  Tens of thousands of Georgians had been protesting over many days in front of the House of the Government, demanding Georgian independence from the Soviet Union.  Soviet troops attacked the demonstrators, beating many, and causing a stampede.  The monument was built much later, in 2004.

Tbilisi really wants Georgia to be in the EU.

There were EU flags everywhere in Tbilisi, and in a few other places as well, like at the Borjomi spring.  From what people told me, people want protection from the EU (against Russia) and visa-free travel.  Georgia already has a very liberal visa policy, allowing both post-Soviet citizens and Westerners to enter without a visa.  That is unusual in this part of the world.  But Georgia hasn’t been lucky enough to get the same sort of treatment in return; Russia requires Georgians to have visas to enter, as does the EU and the United States.  In terms of protection, Georgia, because of its small size and strategic location, has always been under the thumb of some empire or another.  Georgians see the EU as being able to provide protection.  One way Georgia made an early commitment to Europe was to allow a consortium of Western companies to build an oil pipeline through their territory– the Baku-Tbilisi-Ceyhan pipeline, the second-longest oil pipeline in the former Soviet Union.  It was actually closer for the pipeline to go through Armenia instead of Georgia, but the companies felt that Armenia’s relationship to Russia was too close and the Armenia-Azerbaijan relationship too fragile for the pipeline to traverse Armenia.  So, instead, Georgia allowed the pipeline to cut a long, long line through its territory.  It sees the pipeline as also helping to guarantee its safety.

Georgians have complicated feelings about Russia.

On the one hand, Georgia resents Russia for dominating it for so long.  After all, Georgia kind of allowed itself to be swallowed up by the Russian Empire as protection against Iran, then, after the Russian revolution, Georgia had only a few years of independence before the Soviet Union swallowed it.  After the fall of the Soviet Union, Georgia and Russia immediately got into a war over the region of Abkhazia, so that certainly didn’t help matters.  The war with Russia over Southern Ossetia in 2008 didn’t improve relations, either.  And yet, Georgians do not speak with the same hostility to Russia as the hostility I have heard from Ukrainians concerning Russia.  Georgians are angry about Abkhazia and South Ossetia, clearly, but I never got the feeling that Georgians considered Russia to pose an existential threat to them.  Plus, no one was ever reluctant to speak Russian to me.  Interestingly, in Tbilisi the first language spoken to me was English and then, if we could not understand each other, Russian.  But in the countryside, Russian was definitely the lingua franca.

Now, as for the glory and gorgeousness of the Georgian countryside, you’ll have to wait until the next post.  Stay tuned!